My fitbit (charge 5 model) band broke while swimming at the beach. It does swimming tracking automatically, do I have any grounds to claim the band was not fit for purpose when I no longer have the product to return?

Welcome @wa_t to the community.

You would need to check the terms and conditions of the warranty to see if the supplier would offer a replacement for a lost item. Lost while doing something it was designed for. Swimming.

Put a claim to them and see how you go.

If you paid for the Fitbit by credit card, your credit card my offer a refund when lost within twelve months of purchase. My credit card does.

do I have any grounds to claim the band was not fit for purpose when I no longer have the product to return?

It will be important to make clear the basis of the claim and how the ACL applies to the loss due to failure of the product. How do you know the band broke and that the device was done up securely on your wrist at the time, is a likely ask if making a claim?

The ACCC provides the following information. 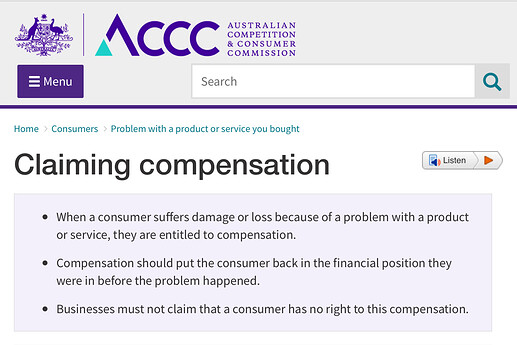 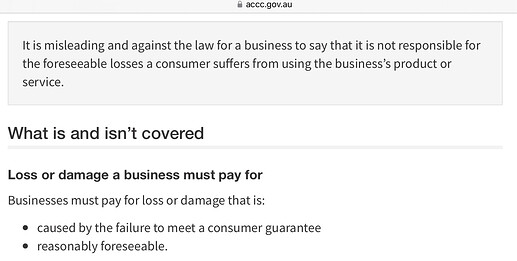 Was the product purchased directly from FitBit or from a retailer/online? There is a reasonable assumption you have proof of purchase, in addition to the product registering with Fitbit on first use.

For those less familiar with making a claim.

The community would benefit to know how the retailer and or FitBit respond.

Hi @wa_t, welcome to the community.

The challenge you will face is trying to prove the wristband broke/was faulty.

It is possible that Fitbit might argue that it wasn’t fastened properly, came lose through the water activity (such as bumping against something) or the wristband wasn’t tight to prevent the watch going over the hand.

They could also argue the wristband was damaged by previous use or you knew it had a fault but decided to swim with it. Both of these could also be used as reasons not to exempt you from your rights under the Australian Consumer Law.

So the main question you need to ask is how do you know the wristband was faulty and caused it to be lost when swimming. Knowing this will increase your success of getting a resolution under the Australian Consumer Law.

If this can’t be answered satisfactorily, the only other avenue is to see if it is a very common fault reported online for the model of watch in question, and argue it is most likely yours suffered the same fate causing it to be lost when swimming.

Another option to explore is if you have home contents insurance, see if it has portable contents cover which would provide insurance for the watch. See if there is any value in making a claim under this cover.

It was for some earlier models. Hopefully Fitbit’s new owner ensured better quality with the models intended for use when swimming. Noted that the marketing by FitBit does not qualify how ‘swimming’ is defined. Perhaps in the T&C’s it does, or it is ambiguous. The surf can be a very tough environment.

Hi @mark_m, Thanks for highlighting the issue in the Community, we’ve received a few reports of the band issue with the Fitbit Charge and I’ll be sure to pass on your comments too. Generally speaking, we attempt to perform our own stress or reliability testing where possible, but it can be a tricky aspect to cover from a scientifically sound perspective over longer periods (although we still complete reliability testing and surveys). Unfortunately, despite all this, some issues do not become a…

Thanks for the responses.

It was only a few months old, purchased at JB Hi Fi.

I’m positive the band was secure and in good condition, I regularly removed it while showering (as recommended Fitbit Wear & Care ) and tightened it for swimming ( I’m sure I read this in the documentation somewhere but can’t find it now). However I don’t see how one could reasonably prove this, and that I didn’t bump into anything. All I could do is say that I got into the water with it on, and noticed it was gone when I got out.

I don’t see anything about pool vs ocean use - there’s a mention of a risk with high-velocity water e.g. water sports Can I swim or shower with my Fitbit device? , but I was in a sheltered area with no surf, in conditions essentially like a saltwater pool.

Will check my home insurance details and then see how I go with JB.

Is your home contents excess more than the cost of a Fitbit? Assuming it was covered in non-detailed portable items allowance.

And going to the retailer for a replacement for a lost item would be interesting. I am already visualising the looks of disbelief of those you talk to.

Yeah expecting the disbelief, it’s why I wanted to prepare by understanding what I should have a right to expect.

A general observation. It’s possible more smart devices will be lost in the water. With limited opportunity to recover, establishing a device has a band defect leading to an unexpected loss could prove difficult, prospective damage to brand reputation excepted.

There are several competitors drscribing their wearables as a ‘surf’ watch or suitable for. Apple and several of its models are promoted with the use of a surfing App. In common with the FitBit Charge 5 both are water resistant to 50m. There are other branded options including one from Garmin.

Is the Charge 5 intended for similar use and in the same class of wearable devices?
Hopefully the manufacturer is confident the band once done up is both secure against loosening and breakage. Ensuring your smart device is securely on your wrist is a personal action. Although being a smart device should it also know to check and advise it is loose? Smart can mean many different things.