Here in South Australia we are experiencing a hike in the price of bananas. No doubt this is probably happening all over Australia.
As bananas are grown in many places in Australia such as Northern Queensland and NSW, I believe there is no excuse to use the floods in Townsville to hike up bananas to this degree.
Having lived in the UK many years ago I recall that they had legislation in place where Supermarkets and stores were not allowed to profiteer on food. Surely this would also be a good practice to follow in Australia where the consumer is is being subjected to unfair practices and paying the price!
Yes we do have various Departments where we can complain, however this is time consuming,therefore if this became Legislation then there would be no need for lengthy enquiries and bureaucracy.

As bananas are grown in many places in Australia such as Northern Queensland and NSW, I believe there is no excuse to use the floods in Townsville to hike up bananas to this degree.

There possibly is. Around 90% of Australia’s banana production occurs in the Tully and Innisfail areas, which also received significant rainfall associated with the Townsville flood event. The production of these bananas would have been significantly impacted by this rainfall reducing the supply of bananas to the market, thus resulting in an increase in price (price, supply and demand curve).

This map shows where the rainfall occurred in January 2019 and it can be seen that the region from Bowen to Cooktown has experienced very high rainfall, with some areas having rainfall in January greater than 800mm (32 inches in the old scale). 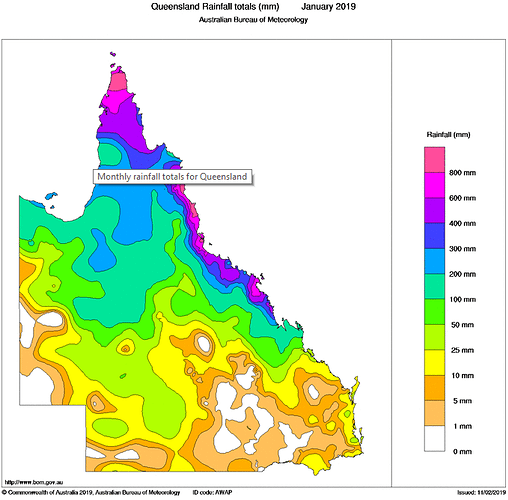 I was in Woolworths yesterday and through the overhead speakers WW were apologising for the priced rise in bananas. The reason given was the floods in the banana growing regions of Queensland. The speaker said that the prices are expected to fall once banana production gets back to normal.

Funny. I have a feeling of

Words are very cheap! I would be interested how many bananas are/were in cold storage and sold on as flood collateral?

Millions of bananas are picked and kept in cold storage all year around. I don’t accept your premise that all banana growing areas have been flood effected and that this is a good enough reason to "hike up? the prices.

Plenty of bananas in the supermarkets in Cairns.

Also plenty of everything else which had to be shipped from down south.

kept in cold storage all year around

Not banana…yes other fruits such as apples are cold stored to supply markets outside the harvest period. Banana are cold stored temporarily (<6 weeks and dependent on the banana variety) on farms and through transport to slow the ripening process.

I don’t accept your premise that all banana growing areas have been flood effected and that this is a good enough reason to "hike up? the prices.

This would onIy be true if the remaining 10% of banana growing areas could temporarily cover the supply shortage from the 90% loss of supply in flooded areas. As bananas have a long lead in period, this can’t be done in the case of a short term supply constraint like a flood.

In relation to the impact of reduced supply on prices, this video explains the price, supply and demand relationships. When supply is reduced, and the same demand exists (like that for bananas), the price will invariably go up. Likewise when supply exceed demand, the price will come down. It is a basic economic principle.

The other thing to consider is the transport routes to and from the banana growing areas were cut off for 1-2 weeks. In effect, this is 1-2 weeks worth of bananas not going to market. As Australians consume about 5 million bananas per day, this means that there was a shortfall of about 30-60 million bananas. This is a significant market deficit immediately after the floods. As the bananas start to move again to meet the market demand (about 5 million per day), the banana price will reduce to pre-flood prices. This could take week(s) for the supply chain to return to normal and for NQ bananas to be shipped around the country.

Bananas can’t be kept in cold stores like apples. The DPI literature says they can be kept for up to 2 weeks after harvest if kept between 13 - 16 degrees C, otherwise they ripen at 26 degrees or with ethylene (given off naturally by bananas, apples or applied before market). Temperatures below 13 degrees ruin even green bananas.

They’re a crop that has to be picked, transported and sold quickly. North Qld has had over 2 metres of rain in a week in some places, making the movement of vehicles difficult and the workforce more interested in saving their homes and cleaning up than cutting & packing banana hands. Remember the cyclone that flattened North Qld? Bananas were supplied from minor growers who could not keep up with demand, prices went up.

Mr Z has a banana a day, so I grow a variety of bananas & buy regularly to supplement that.

I grow a variety of bananas

I believe in Qld ALL banana trees have to be registered even if its in someone’s back yard. Apparently this is to control disease outbreaks.

Qld ALL banana trees have to be registered

(while this is on an .org site, taken from the government web site, it is dated 2004)

Qld ALL banana trees have to be registered

When I was young, there was a business in the Cairns CBD and the signage on the wall read “D. E. Good & Co. Licensed Banana Ripeners”.

However, my very good friend, Mr Google, does not seem to know about it.

Does anyone know why banana ripeners were require to be licensed in the 1960’s and why this practice ceased?

I have seen bananas in some shops costing up to $5.99 in South Australia.

The price seems reasonable as it is only 9 cents more than Coles in SA which is pricing them in SA & WA at $1 kg more than the east coast.

The price at Coles in Cairns ranges between $2 and $6 kg, dependant on the season and supply.

The bananas I grow are all tissue cultured. The Lady Fingers that were on the property when we bought it were the only variety that were allowed to be planted without a permit (so I was told, by the owners and nursery). The tissue cultured ones I bought through a bulk deal with the Rare Fruit Group that I belong to. Quite fiddly to raise to a point where they can be planted out, but once established you can propagate on your land from suckers and corms. You can’t move them off your property because of soil borne diseases. They were about $4 as opposed to $25 individually and take about 18 months to 2 years before the first crop.

The shop pricing of bananas has to include the ones that don’t sell. Our little supermarket today has them for $5.99 kg, with over ripe $1.99 and $0.99 and then thrown out. The other, slightly larger, supermarket in the next town has food scraps for sale $2/kg which includes over ripe bananas, outer leaves of lettuce etc - stuff they used to dump. They are also charging $1 cardboard box, $5 foam box & $4 plastic catering pails - again stuff they used to dump. People obviously are buying it.

…so I grow a variety of bananas

The Dwarf (supposedly!) Red Daccas we have growing here have finally produced some fruit!

I’d suggest that bananas can be grown with some degree of success in most areas of mid-northern Australia that are reasonably well protected from cold, with not to many 40C+ days. Ours have had snow on them a few years ago, and it did knock them back, but they came back very well.
I like to eat a banana every day, so could never produce enough at home, but it is nice to ocassionally avoid the shops for fruit that is not normally locally grown.

We’ve only got 2 bunches, but that should tide us through the price peak period.

We cut this bunch a few weeks ago and have them hanging in the lounge room, and have eaten about 1/4 of them so far. 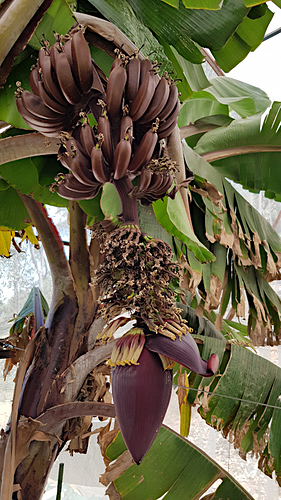 Hadn’t heard about these … they look delicious.

I’d describe them as small and tasty

In Australia the commercial crop varieties of bananas (eg Cavendish) are tightly controlled - including in people’s backyards. For disease control and pest control reasons.
In Queensland regulations administered by DPI (new name is DAF) control the sale, purchase, and movement of regulated varieties.
Which is why when you are looking at a clump of bananas in someone’s yard it is most likely to be the Lady Finger variety because it does not fall under the same rules. (another name for Lady Finger bananas is sugar bananas - they are small, sweeter than Cavendish, and after they have ripened they don’t go brown & mushy as quickly as Cavendish do).

I think the supply and demand economics have been adequately explained. A couple of other points: 1. More regulation = more bureaucracy = more taxes. 2. I’d rather give my money to banana growers who get wiped out by cyclones, lose a year’s income (or pay excessive insurance every year) and have to do all the hard work of cleaning up and replanting. So Townsville gets bombed this year, but other growers get a premium to make up for the years they lost their crop, like Tully 2011 http://www.abc.net.au/local/stories/2011/08/06/3288192.htm when bananas were about $12 a kilo. Seems fair to me. Too expensive? Eat an avocado instead. Keep a farmer’s family fed.