We have a set of Russell Hobbs salt & pepper grinders which each run on 4 x AA drycell batteries and whenever I replace them, they are never uniformely discharged.

This week, 3 of the old batteries from the pepper grinder measured 1.472 volts and the fourth one measured 0.665 volts.

We also have an old Clipsal Centameter and both the transmitter in the meter box and the receiver in the kitchen use 3 x AA drycell batteries.

When I replace the ones in the transmitter, 2 will be low and the third will actually have a reverse voltage.

We always use Energiser alkaline batteries and I always test the new batteries prior to installing them.

I am mystified how batteries in series can discharge unevenly, let alone reverse their voltage.

Batteries rely upon chemical reactions, and these are not always consistent. They can vary depending upon the quality of the manufacturing process, the temperature of the batteries in storage and use, the device that’s using them…

Dunno how it reverses polarity, though. An electrician might have a better idea.

No battery as @postulative expressed are the same even from the same batch. Differences in compounding, metal, small faults in the casings and materials all lead to disparity. They will or should all provide an certain amount of power that is consistent but once that measured amount is met then it can be widely different what each battery might sustain.

As to the reverse polarity if they are in series and these were then if one goes flat before the others then the others can and do reverse charge the battery. It will not sustain a great charge as they are not designed to operate this way but it will be measurable.

EDIT found a reasonable answer on line re the reverse polarity issue that is on the same track as mine but does give in one answer a bit more science to the answer.

What will reverse polarity in an Energizer AAA, unpowered, dead battery, circuit?

I am mystified how batteries in series can discharge unevenly, let alone reverse their voltage.

@grahroll appears to have the answers in full.

I now prefer rechargeable batteries, Sanyo Eneloop or equivalent. They work in most devices without any problems, and are over time much better value.

As alluded to above, they do not discharge unevenly- the current flow through the circuit is the same everywhere, ie all the batteries are discharging at the same rate. (Kirchhoff’s Law or Conservation of Charge).
Some cells just have a lower capacity to start with, and therefore go flat earlier, and the ones with greater capacity last longer, and can discharge into the flat ones, reversing the voltage. This happens to individual cells in car batteries too, even though on most modern batteries you are unable to access the Lead connectors between cells to measure it.

Thanks for your replies. I understand how a battery could be “reverse charged” by the other batteries but I am still intrigued by how one can discharge much more quickly than the rest of the group.

I also measured the AAA batteries in our 4 remotes for our Fujitsu aircons and each pair were the same voltage. All were fairly low so I replaced than all.

I then measured the 3 AAA batteries in our small Arlec LED torch, and once again, they were the same voltage, but were low so I replaced them.

I tested the 3 AA batteries in the indoor receiver unit for our Clipsal Centametre and they too were all the same, but also low, so I replaced them.

Finally I measured the 4 AA batteries in the salt grinder which I replaced about a month ago,…

Three of them were 1.463 volts, and the fourth one was 1.279 volts. It is the second one from the positive terminal. I will note in future the position of the low battery.

All batteries were recently bought and all in each device were out of the same pack, and all were measured before installation.

Thank you, I forgot my electrical theory re volts, amps (current) and ohms (resistance). I have edited my post to remove the erroneous information.

I understand how a battery could be “reverse charged” by the other batteries but I am still intrigued by how one can discharge much more quickly than the rest of the group.

A current can pass through a battery. If one battery is flat or lower charge for other reasons, current can still pass through the battery (this principle allows batteries to be placed in series). This of the battery as a pipe with a pump on it pumping water. If you have three pipes and pumps in series and one pump fails/stops, the water will still flow through the stopped pump/pipe albeit at a reduced flow.

If one battery has a lower voltage for some reason (such as some of the thoughts outlined above), it in effect acts like a part of the wiring in the circuit (like a pipe int he above example) rather than a source of electricity for the device being powered.

One can perform an experience with say a multi-battery torch. A ‘dead’ battery can be placed in series with some good batteries and the torch still works.

This is why it is always good to check the battery condition when changing a battery, using a mulimeter for example, to see if it has reached the end of its life or can be used in another appliance. Often a battery can use used in say a remote after use in a powered motor type environment. The battery may not operate the motor, but still has enough inside to operate a remote.

All batteries were recently bought and all in each device were out of the same pack, and all were measured before installation.

Even within batches there can be variations. A bit like cars coming off the same production line using the same components from the same suppliers. It is still possible to get a lemon in a batch while others in the same batch seem to be lemon-free.

I use rechargeables as much as possible, and have a large stock of AA, and a lesser number of AAA cells.

I use a very informative charger, and can report that batteries taken from devices often exhibit the same behaviour as what @Fred123 has reported. It seems to be more pronounced in devices which are not used regularly.

If you want my advice (too late - you’re getting it) you should ditch any batteries you have and replace them with Enloop rechargables. I am a photographer, and need batteries to last a long while, retain their charge and be 100% reliable. Enloop are more expensive, but you get what you pay for. They hold a charge for up to a year and are simply the only battery you should consider. (and no, I don’t work for them although I’d be happy if they pay me a commission - I’m always flogging them, they are that good).

I changed the AA batteries in the salt grinder today.

Once again, it was the second one from the positive terminal.

replace them with Enloop rechargables

Perhaps there is a different question to ask based on your observations?

How much energy did the one low voltage battery deliver before expiring?
And how much life remained in the other three batteries?

If all four reached their designed C10 or C100 life there would appear to be little to complain about in respect of value.

The three still with life remaining present a wastage concern if they are not recylicable. Rechargables would be a better choice in that instance.

What is not readily evident is if there is any significant variation in quality of the batteries in a multipack purchase.

It could be one in very 3 or 4 is a substandard/dud? Hence every second or third set we place in a device does not last as it should. At what level of short battery life would the average household look to blame the battery quality vs other unknowns? Eg faulty devices, untracked usage etc.

Once again I have changed the 4 x AA batteries in our salt grinder after 3 measured 1.428 volts and the other measured 0.937 volts.

As always, the lowest battery was the secong one from the positive terminal, and as usual, I tested them before installation as I did so today, and all were the same at over 1.6 volts.

It has happened too often to be a coincidence or a variation between individual cells.

Both the old and new ones are Energiser Max alkaline batteries.

Unfortunately, I change them when the salt and pepper grinders are grinding to a halt so swapping positions would not get them running properly.

Perhaps I will “reserve” the 3 not fully discharged batteries and add another used battery of similar vottage. 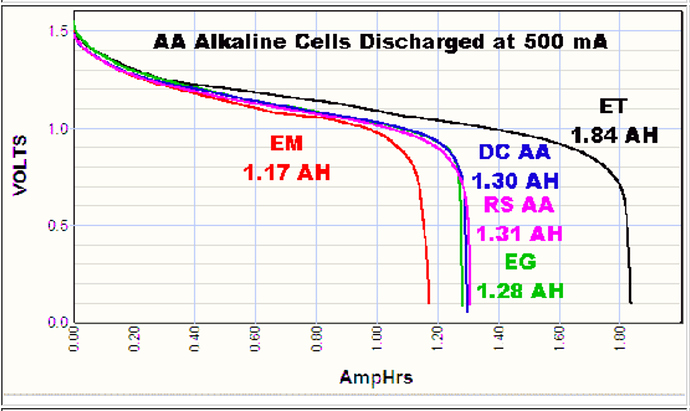 Note there is a rapid drop in cell voltage at the end of life. Concurrent with the loss of chemical energy the cell internal resistance also increases.

For four batteries in series, the first cell to consume the last microgram of electrolyte will also be the first to drop voltage. At the same time the internal resistance of the same cell increases effectively blocking the discharge of all remaining cells on the battery pack.

I like the idea per @grahroll, of replacing the failed cell with another good cell. The acid test would be to insert a fresh battery in the same position in the pack as the failed battery, and measure how much additional use comes from the remaining three used batteries.

If it is a relatively short amount of extra life it suggests there is no issue with the life of the batteries. If however the three old batteries plus new battery, ’keep on keeping on’ it would suggest that one of the original four batteries was indeed substandard?

I don’t mean waiting until the batteries run out before swapping eg if it takes say 2 weeks to require a battery change then at one week measure the voltages and swap the lowest one into a position of a higher charged one and see if the same position is the lowest one after they no longer power the grinder. This might mean you move the battery from 3rd position to say 1st position and the 1st position one to the 3rd position. When the grinder no longer works then check the voltages of all 4 and see if a position change has lead to a different drain on the swapped batteries.

Yes, I see what you are suggesting, in simply moving the battery order around. There is science in the method, but no apparent science to the observed battery behaviour?

I wonder in the previous battery tests by Choice how many samples of each type of battery were tested, and to what extent was variation observed?

And as you have suggested replacing a failed cell with a new also has merit. @Fred123 believes it is perhaps something to do with that particular slot in the battery compartment. Both ways would work.