Whilst driving to buy some seafood this morning, I spotted the signs below at the intersection of the Southern Access Road aka Portsmith Road aka Ray Jones Drive and Lyons Street. 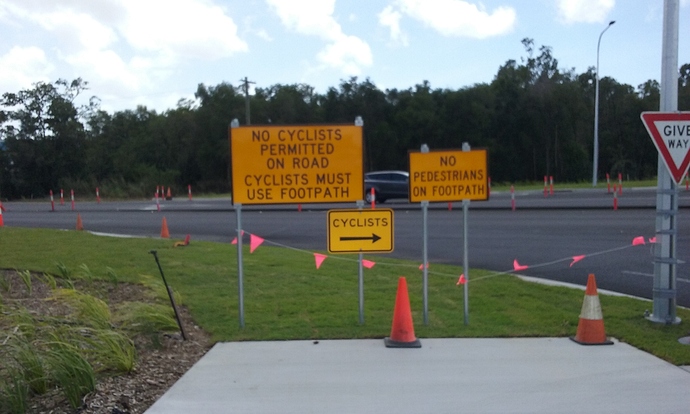 They are at one end of the very wide concrete pathway where it stops at the Lyons Street intersection and then continues on the other side.

I can only assume that pedestrians must be expected to walk on the roadway.

Today’s episode of “You Just Can’t Help Stupid” proudly brought to you courtesy of TMR Qld.

PS. Why refer tio it as a footpath if only cyclists are allowed to use it?

I wonder what disability scooter users are supposed to do.

I have looked at this a few times, and tried to think of some way this could make sense in some way, and have failed. Perhaps this could be submitted to the writers of the ABC show Utopia.

brought to you courtesy of TMR Qld

To be fair, I suspect that these roads are local government (council) jurisdiction, not state government (TMR)
Still, that signage is hard to make sense of!

I suspect that these roads are local government

No. They are TMR replete with banners with the Qld Governement stating what a great job they are doing.

A slightly different but just as amusing sign on the side entrance to a large transpory depot opposite our little dog’s beauty parlour.

The depot has 2 street frontage at the front and the rear so I doubt that these gates are ever used. 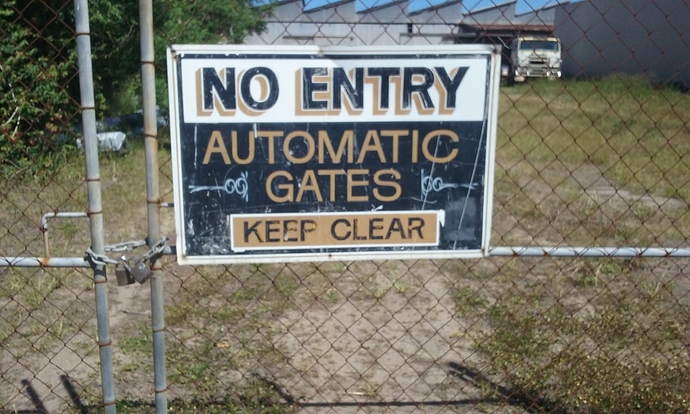 And what appears to be another TMR Qld failure.

'Wildlife being annihilated' on hinterland road after solid guardrails installed

Locals in the Gold Coast hinterland criticise the installation of new guardrails along an 8km stretch of road, saying it presents a risk to wildlife and motorists.

The original Armco guard rails in areas of FNQ comprised a single rail with the bottom well above the ground.

Many have been upgraded with a second lower rail fitted to prevent motorbike riders going under the top rail in an accident, but the second rail is still clear of the ground so small creatures can still get under them.

Looks like tis SEQ one was not planned very well.

I can only assume that pedestrians must be expected to walk on the roadway.

A road rules quiz slideshow with some input from TMR Qld.

Still no explanation as to what the pedestrians are supposed to do.