My wife happened across this scam product when looking for organic cotton this morning: The Personal Pendant was specifically designed to be worn over the thymus so comes with an adjustable waxed cotton cord so it can be worn around the neck.During the proprietary manufacturing process the vibrational signature of the metal (Titanium)...

If that isn’t enough healing and protection power for you, there is more!
Teenager kits, car kits, essential kit, large house plate (a real bargain at just $1030!), home care water kit, and the Tesla business kit for just $2975!

Titanium sheet metal is also available from a number of industry suppliers but expensive. Not yet at Bunnings.

Rumour has it that with sufficient applied to the outside of the house, perhaps as a specialty gutter, your whole house will disappear from visible and invisible detection. Such are the mind altering, sorry light energy transforming properties of titanium.

Not surprisingly none of this is true, except the bit about Bunnings.

@Fred Simply put it is Both!!

I feel I have all the healing protection needed, as my bike frame is Titanium, and if I’m not riding it, then it is on the veranda

I’ve also got another Ti bike frame under the house, to keep any sneaky EMR approaching from underneath!

… at least if someone shoots the wearer, they won’t fall, or they’ll get up again, or it will just ricochet … sorry Dave, I’m afraid I just said that …

Titanium has long been used as a marketing gimmick or branding.

A more practical use, although no longer available. 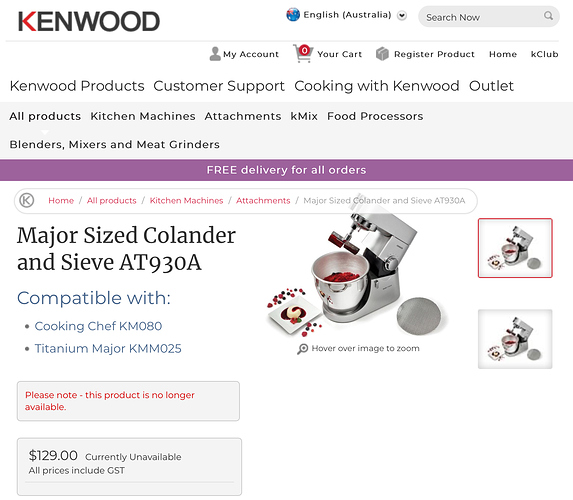 I do like the idea that the range included a colander and sieve. Perhaps it sold out?

Also not really titanium, which suggests the prior discussed pendant does not need to be made from said high value metal either. Although it might be.

Looks like stainless steel, Titanium perhaps referring to the colour.

Small pieces as in the web page I linked to are not that expensive, just a few dollars. Once you start welding and shaping, such as into a bike frame, it becomes rather more expensive.

I was the same…how could anyone be fooled by such detritus. I first thought 1/4/20 must be late due to COVID-19.

No guarantee of covid19 protection, must have been buzzing around for a while to miss out on that.

Has anybody done any tests to support or refute their claims?

Welcome to the Choice Community robe070

I’m pretty confident that testing their claims is unnecessary, other than for comic purposes!

Has anybody done any tests to support or refute their claims?

The problem is they are marketing products with particular claims without any scientific evidence to support the claims they make. Marketing of such products rely on anecdotal evidence of their users and pseudoscience…and if one if a believer, the placebo effect can be very strong.

An example of pseudoscience is the Kirlian test used to substantiate the device’s efficacy…These tests were carried out on the latest computerized diagnostic equipment used in Eastern European military hospitals, why not a recognised testing authority rather than some unnamed Eastern European military hospitals. A recognised medical testing agencies would not want their names linked to such products (witchcraft) as their credibility would severely tarnished and future research questioned.

These sort of products pray on the vulnerable, giving false sense of hope and improved wellness to those who are brainwashed by the unsubstantiated marketing claims.

pray on the vulnerable

The difficulty here is that there is zero science in support of the claims of the product. However as already pointed out, science (psychology) does help to explain why the product has a market.

The problem is they are marketing products with particular claims without any scientific evidence to support the claims they make. Marketing of such products rely on anecdotal evidence of their users and pseudoscience…and if one if a believer, the placebo effect can be very strong.

These sort of products pray on the vulnerable, giving false sense of hope and improved wellness to those who are brainwashed by the unsubstantiated marketing claims.

Buyer beware! As a fun item, work of modern art or nerdy kitch perhaps a suitable gift. For those who believe in other benefits, if you have the cash to spare perhaps there is no harm done.

It’s difficult to take the product seriously. It should not be promoted as a medical device or aid or offering any restorative health properties. For anyone with a medical condition, or not feeling quite right, or mentally themselves, the widespread community advice has always been to seek professional medical support. There are also a number of well publicised organisations that offer assistance with mental well being. Titanium discs were not listed on the PBS last time I checked.

P.S.
For those most interested in titanium and it’s used. One source from a core science. (Opps a pun?)

For those still keen on the pseudo-science. It’s worth noting that one of the most common uses of titanium is as a pigment enhancer in white paint. Painting your home a bright white or any colour that uses a bright white base could envelop your entire household in titanium. Enhanced protection against the hazards of the 21st century.

From the shade of our bedroom walls, to the colours we associate with our favourite brands, colour trends are a bigger part of our lives than we might realise. For centuries, different colours have been found to have a profound influence on our moods...

Subjectively bright colours can prove lifting and energising. Not all due to the titanium in the paint?

You don’t need any heavy duty scientific qualifications to see that the device is rubbish.

Ok where are the experimental protocols, the tables of results, in fact any kind of publication much less one in a peer reviewed journal?

I admit to bias. Bias in favour of evidence, repeatable methods, public disclosure and independent testing. This mob have none of those. I am biassed against new-age double talk.

Please explain what is “the wearer’s personal matrix”. What evidence do you have that such a thing exists and has anything to do with health or well being? Before you ask, I can’t prove it doesn’t exist.

Nobody can prove I am not a 70kg blue rabbit that can type. If I wanted to claim I was such a talented bunny it would be up to me to show the evidence, until then it is fair to dismiss the claim without further thought.

From previous posts it is clear that you lean towards such mystical things and you have little respect for the scientific method. You are entitled to your beliefs but please don’t encourage people to waste their money on garbage.

And where are the leading experts in quantum physics lining up to endorse such products? They don’t exist as they don’t operate in the world of pseudoscience.

There is a huge gap between the Kirlian test and quantum physics.

Kirlian tests (or more correctly photography) shows discharge of electrical charge on surfaces of objects. Most surfaces, unless an earthed metal object, have a surface charge. Even the human skin can be charged (think static electricity during dry weather where it is discharged when earthed causing one to be zapped). Wellness product sellers spruke the Kirlian test as evidence of something it is not. The tesla product is no different. This article from Dr. Baird a former Assistant Professor of Physics at West Texas A&M University explains it more… Do Kirlian photographs show the soul of an organism?

Unfortunately images from Kirlian photography looks convincing and impressive to the uninitiated, and is why such photography are regularly used as evidence in marketing materials of naturalist, wellbeing products of evidence of a products benefits.