Target has "Denim for everyone" ... or do they?

In need of a new pair of Jeans earlier in the year, imagine my excitement when the Target calalogue arrived emblazoned with the words “Denim for everyone”. I usually get clothes from the “Mr Big” section, and I was seduced by the word “everyone” and immediately thought that meant, well, everyone. 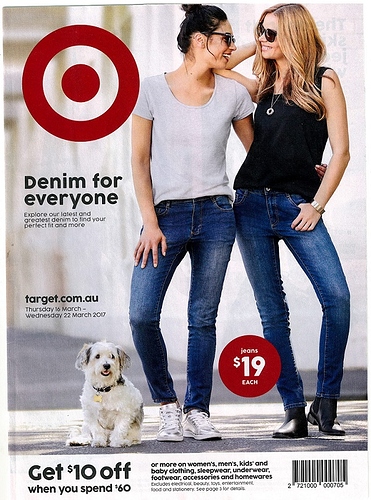 On 19 March I sent customer support an email explaining my concern that after scrutinising the brochure and visiting the store, there did not appear to be “Denim for everyone” … with no reply. I followed this up with an email on 5 April.

On 5 April I received the following reply from Target:

I wasn’t entirely sure how to deal with such a reply - but my response was rather cutting and I did later feel sorry for the “Customer Support” representative who surely was in training either as a lawyer or circus clown … (I’m told by a lawyer friend the two are often confused during the training phase).

Apparently I was confused. At least they were sorry …

So … based on the response from Target I took away the following points:

Is “everyone” confused yet? that would be OK, because according to Target, it would not be all of you …

As I read it, this is a clear case of false advertising, and the double-speak from Target in response is even more revealing of their attitude to truth in advertising.

I found what I wanted at another store

So “everyone” is everyone who wants to buy what Target have for sale? Clearly no-one (all that is left after you remove everyone from the population) is interested in other products.

Thanks for in depth evaluation of Target’s campaign.

@draughtrider, looks like it was a short-sighted ad campaign from Target to me. Thanks for highlighting it and glad you found what you needed