It’s true magpies can remember faces, and does it make a difference in their behaviour? Magpie swooping season is here but how long does it last and is it true that...

As we roll into September, we also find ourselves in peak magpie swooping season. So what is there to do about a bird that can remember what you look like?

Personal observations align.
It’s worth noting other birds exhibit swooping behaviours in breeding season. There is a Pied Butcher Bird at the start of our road who took exception to my afternoon walk.

A broader view to add to that of the ABC.

It’s true magpies can remember faces, and does it make a difference in their behaviour?

I think it does in some situations. There is no doubt that they can recognised individuals in my mind. If the bird has been threatened or attacked it may take against all humanity or just the one that did the deed. In the first case recognising faces makes no difference.

These birds are capable of quite complex behaviour. They can be tamed or infuriated equally well and they know who did it.

They are always territorial but this ramps up in the breeding season. They are capable of going to war. I have seen a foreign family group (clan) try to invade the plot owned by the local clan.

The two groups faced off. They had marching and singing contests, then aerobatics contests with tail-feather attacks, still the interlopers wouldn’t go. So they got down and dirty and ganged up on one of the enemy, presumably the leader, and pecked it until it rolled on its back and submitted. The invaders then departed as the locals sang them off. Rather like football really except everybody wears the same coloured jersey.

Sadly the last drought was so severe that three of the six in the local clan died. I am not clever enough to recognise individuals reliably so I don’t know if it was daddy, mummy, the kids or the hangers-on who died.

They never swoop me and their tree is by the front gate so I pass them regularly. They bring their babies to the garden to teach them to hunt. Of course lazy junior tries to get the parents to keep supplying food by crying pitifully but it doesn’t work.

The pied butcher bird clan likes me. Whenever I mow the paddocks they line up on nearby trees or wires to ambush the mice that run from the mower. As the mower spirals in to the centre of the block I am mowing their excitement grows as most of the rodents leave their run to the last minute. Normally the birds keep some distance away but if it is a matter of being first to get lunch they swoop by the mower very close with no fear.

For your entertainment… I haven’t taken any this year, but I have hundreds of pics like these 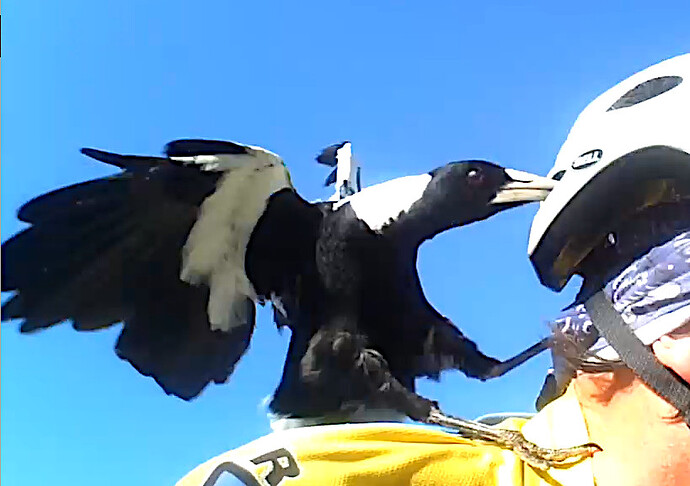 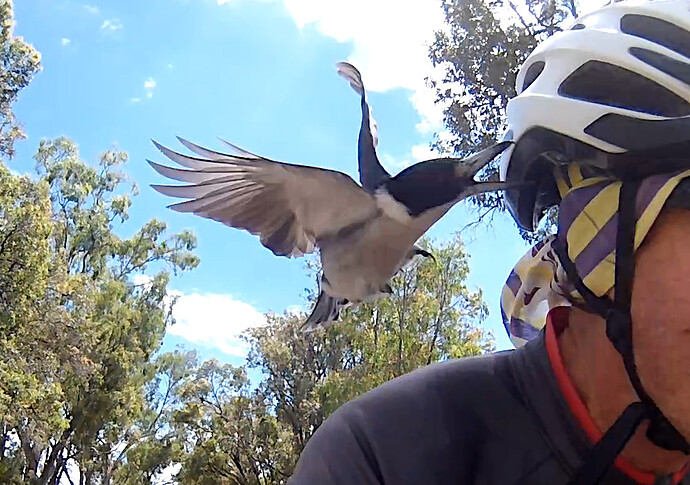 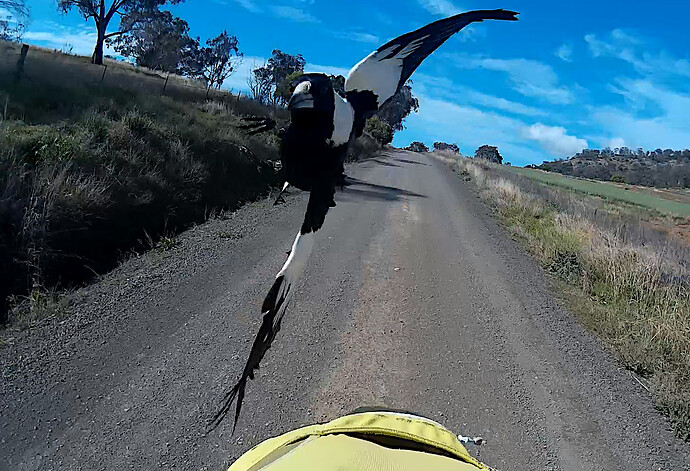 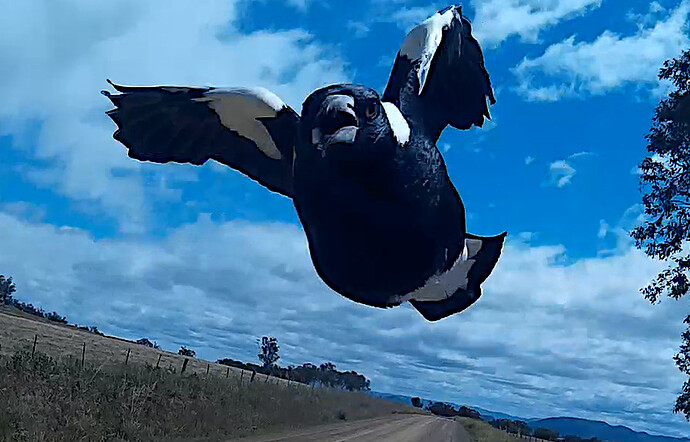 It isn’t just spring/breeding season, I’ve been swooped by Magpies every month of the year when cycling.

You really have to stop using mince as a hair conditioner.

I thought Daphne du Maurier’s plots were pure fiction.
She appears to have a broad readership?

lol, I don’t usually make eye contact, just look ahead or keep my head down. The one in the 3rd pic is only a bit over 1km away, and so far this season has hit my shoulder or helmet the most times.

Cameraphobia is not a new condition, it was known before the invention of cameras as scopophobia .

Although we’re having a bit of fun with this subject, I sympathise with you being attacked by magpies, which looks like anything but fun!

I have a Maggie pair who have lived here, had young here, added members, and lost members for more than a decade (in Sydney’s congested Inner West). I have never fed them but I have always talked to them. I have never been swooped. In addition I have dogs. When they come out of the house on leads the Maggies ignore them, but when they emerge loose the birds immediately fly up into one of the trees.

Magpies do not like people on bikes or scooters. Perhaps its a genetic memory because I’m sure they dont recall individual bike riders who have offended. I don’t have many magpies around at the moment, but those that are here don’t swoop me. They appreciate the water I leave out fr them and others during the heat of summer and they all have Toby (cat) bluffed so its safe for them

My bike is black and my clothing is black and white from shoes to helmet. Magpies seem to think I am one of them

We leave our resident magpies alone, apart from providing a birdbath, and they return the favour.

On a lighter note, we were particularly amused to watch 2 of them hanging upside down from the lower border of a towel which was hanging horizontally from the Hills Hoist. They were having a great time, clinging on to the bottom edge of the towel by one foot. It was interesting seeing how they got from ground to towel and back again, and a juvenile’s half-hearted, unsuccessful attempts to replicate their antics. We managed to get a few short videos of the display.

Like this, you mean?
The Magpie Whsiperer is on YT (obviously) and also on facebook. She puts out toys for them and they seem to love to play., 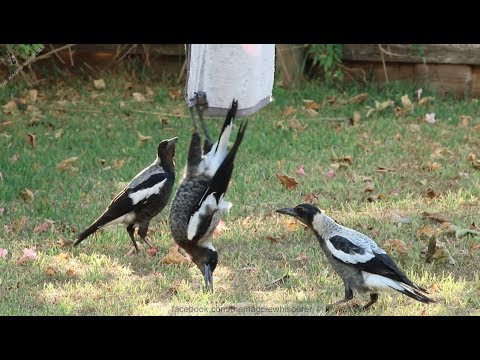 That is such a great idea

You could cycle over the drawbridge. BirdLife Australia informs me that magpies in Tasmania don’t swoop, (and they don’t know why).

Yes, Magpie Whisperer video is similar to mine. Our washing was higher off the ground and ‘our’ magpies couldn’t reach the ground to feed upside down.

I listened to a ‘Conversations’ podcast from ABC Radio National from Thursday 1/9/22 called ‘Bush chooks, clever crows and assassin magpies’. It is a very interesting and informative segment by an Australian expert, Darryl Jones, on city birds.

The ABC Conversation Hour had an episode on this very subject recently.

The birds do recognise faces and remember those people for many years and cyclists shouldn’t pedal away as fast as they can. 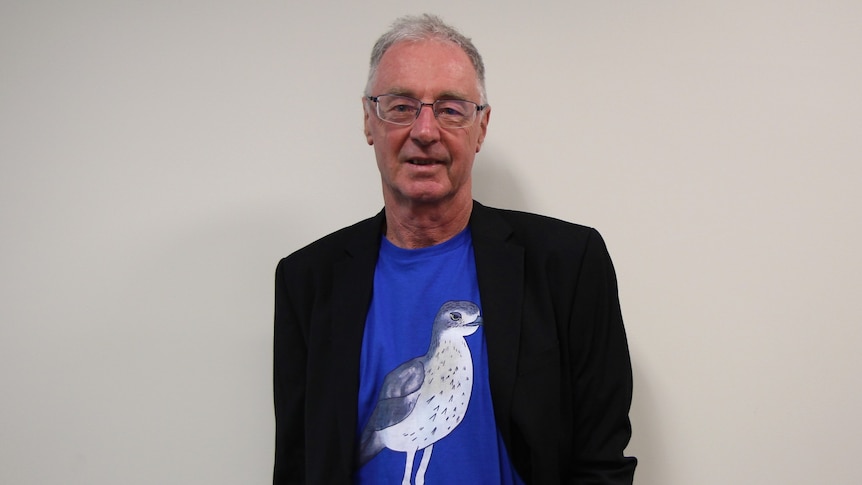 Darryl Jones has an enthusiastic curiosity about wild birds that, against all odds, flourish in Australia's cities and towns

They don’t have to see your face to attack, plenty come from behind without glimpsing my face, but it is the same few year after year. Plenty show no interest in swooping though.
Being attacked by a Magpie doing ~90km/hr while I’m riding down a hill at 70km/h doesn’t very easily translate to not riding away quickly