Sunbeam Food Slicer (any of them)

There are two issues here -

Quite some years back I bought my first slicer. After about 7 years it failed due to a small drive cog. Apparently it could not be repaired. I bought a second machine. I’ve had that about 7 years and now the female thread that holds the blade button to secure it in place, has failed. As in the first case, Sunbeam has no parts. Upon searching the internet, I find there is a community of people whose slicers no longer work due to failed minor parts. And it seems no-one can tell you if a current part will fit an older machine. When it works, the slicer is a good machine. I’ve made my own bread for years and I use the machine to slice it.

Now to the service - or lack of it. A Sunbeam Customer Care person referred me to where I could get help. I’m in SA - the only listed place for SA only did coffee machines, so that was not helpful. I tried interstate (it was amazing how many repairers only do coffee machine - is there a message here?). I eventually spoke with a woman who could access Sunbeam’s parts inventory and told me there were virtually no parts for my machine (I could get a new tray or new rubber feet).

Well, apart from suggesting there is a niche market for someone with a 3D-printer, I suspect I’m at a dead-end unless Sunbeam decides Customer Care actually stands for something and offers to replace the machine for a significant discount. So, is anyone able to respond with some wisdom as to what to do next, or who I might contact, especially in Sunbeam? Thanks.

So, is anyone able to respond with some wisdom as to what to do next, or who I might contact, especially in Sunbeam?

Apologies I cannot, but if there are many old broken machines in the wild you might try to acquire one as scrap for the part(s) you need.

I had a similar problem with Asko a few years ago. Engineered for 20 years, main board failed at 12, no parts in the world, anywhere. Asko suggested I try some used appliance shops. Was that more helpful than Sunbeam?

Depending on the cog and your IT skills (or the skills of your friends and family) you might be able to find someone with a 3D printer and make a cog that works, depending on how much pressure is put on it.

The other option is if it is a standard type cog, to see if there is a non-genuine or other brand which has a suitable replacement.

There are some online appliance spare parts businesses which have cottoned on to manufacturers not making OEM spares, and have sourced non-genuine spares to satisfy a need.

Sunbeam isn’t alone in not having spares for cheap small components which fail before the whole of the product. We have found many manufacturers of household items, electronics and appliances the same.

Thanks, the woman who accessed the Sunbeam part inventory might help me here. I shall follow it up. Exploded view also a good concept - not in manual - I checked, but repairers might have it.

Thanks, but it’s not the cog - my second machine it’s " the female thread that holds the blade button to secure it in place". O’ to find the #D-printer person. Thanks

my second machine it’s " the female thread that holds the blade button to secure it in place". O’ to find the #D-printer person.

You might try the local ‘Men’s Shed’ to see if they have a member who does machining, either in the Shed or at home. Likely a labour of love, assuming the part is not a complex shape. I’ve previously needed to do the same for very old instruments.

P.S.
There are also repair systems for damaged threads, depending on the material and remaining strength of the damaged part. Plastic or metal?

Lucky it’s not a coffee machine. The cost of a major spare and labour can soon amount to half the cost or more of new.

Good thought. The part is ‘plastic’ (delrin?) and that’s a significant part of its undoing. I’m not a ‘metals’ person but the part would not be a straight machine job - it’s got locating notches to set it in place. In light of your comment I’ve re-examined the part. The base where the screw passes through to secure it to the body of the slicer appears to have been glued/‘welded’ to the body of the part having the reverse female thread; about a third of it has become detached thereby stressing this assembly and fracturing this base section. I know of two Men’s Sheds in my area but they’re wood based. Thanks for your response.

The part is ‘plastic’

A long shot, but if the part is a ‘throw away’ try JB Weld Original. I have successfully fixed many things that have become indestructible (in a practical sense). If you have never used JB Weld original it is an ugly steel colour and you want some tooth picks or something similar to remove all excess and shape it before it dries. It can be a bugger to work after it dries.

An example of its strength and durability is a ripped SUV mud flap I repaired with it, that is still intact at 6 years and counting. 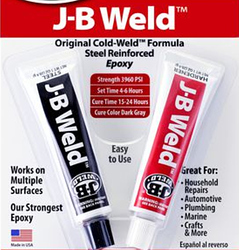 Available at auto parts stores and Bunnings among other places.

Many thanks. You’ve also prompted a thought - Selleys produce a ‘glue’ that deals with Delrin-type plastics. You prime with a felt-tipped pen, then apply the glue. I can’t remember what I used it for but it must have been successful because I recall recommending it to a friend. I’ve not heard of J-B Weld but I’ll be doing some research. I guess I’ve had my mind ‘closed’ to repairing, but as you say, the outcome could be better than the original. Appreciate that!