I had a look through the existing topics but couldn’t find an existing one. Sunday afternoon beers may have had something to do with that so please feel free to merge with an extant topic.

I received this notification last night. Checked and found that the most recent update of the YouTube app was six days prior. That last time I had used the YouTube app was seven days previously. The iOS development documentation recommends that you only ask for permission immediately before you require necessary access to a specific resource (I write iOS apps for a living so I need to be aware of this stuff). So why was YouTube asking to access my microphone a week after not being used? 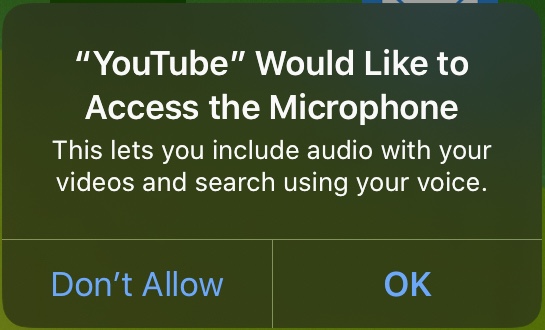 Something similar happened on my partners iPad yesterday after using Your-tub firing the day. The lock screen on reopening the device was displaying a YouTube flavoured box with volume controls and a microphone symbol. Apologies, I’ll post a screen shot if it reappears. It is certainly not usual, or clear why this behaviour has occurred. Perhaps it is unrelated.

My understanding is that apps are able to gather information in the background while they are not ‘openly’ running. This allows, for instance, your weather app to tell you when opened exactly what the forecast is for the three square metres within which you are currently standing, and allows Siri (or Google Assistant) to pop up with a cheery “Hello” whenever invoked. It also permits stalker-ware to run undetected.

Is this a problem? Uh - big-time. There is nothing in that notification that limits YouTube from recording when it is not in the foreground (although apparently you will see a mic-in-use notification).

A quick search of the Internet tells me that you are not alone: