With significant hail storms occurring in Sydney (it seems) every other year, what are people’s stories around hail damage to solar panels? Are panels somewhat resilient to hail damage? Are they just as susceptible as anything else on a roof to hail, and if so then I should consider reducing my home insurance excess on the assumption I’ll most likely have to replace a panel or two after each huge hail storm?

Yes, they should be able to withstand hail up to about 25-30mm. LG provides the following information about their resilence to weather…

I also suspect that the aluminium frames around the glass panels are less robust than the panels themselves and more likely to be damaged/dented by hail.

You do raise a good point though, if one has solar panels on their roof, one should check that they are specifically covered and noted on their home insurance policy.

As a general reply, from the US (NREL is a major US government lab) 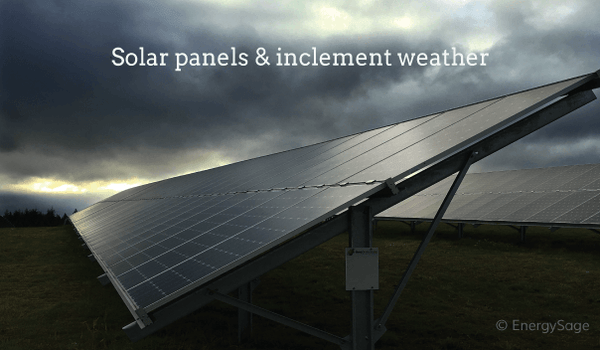 How well do solar panels stand up against hailstorms and hurricanes? Learn more about how how solar panel systems fare during extreme weather events.

With that, some panels are stronger or weaker than others just as some are more or less efficient, so best to look at the specs and tests conducted on your make and model panel.

Damage from large hail stones may not be immediately apparent on PV panels. Micro cracks can form in the Silicon when the front glass is impacted, even if the glass itself is not broken. The micro cracks run hotter than the rest of the cell, and over time you’ll see patterns forming and decreased output until the affected cell fails, with a large decrease in output from the panel due to the serial connections of cells. This will affect the output of the whole string if using a string inverter. With micro inverters such as Enphase, output will only be reduced by the affected panels, the remainder producing as usual.

The flatter your PV array is mounted, the more prone it will be to damage, whereas tilted arrays significantly decrease the impact force of large hailstones, which fall near vertically, even in quite strong winds.

Good info to be armed with. Thanks.

Our panels survived the recent hail storm, we did get a hole in a nine year old whirlybird though.

Our panels survived a massive Brisbane hailstorm in 2014 with no problems. We had hail bigger than golf balls and the panels are still going strong. Ours are mounted flush with the angle of the roof on our Queenslander.

Good to hear. Thanks!

We had hail 75mm to 100mm at least, solar PV panels don’t like it that big, smashed all 16PV’s, one glass panel on SolarHart and the Solar PV’s on my bore pump system you can fit a football through the holes/tears in the panels. 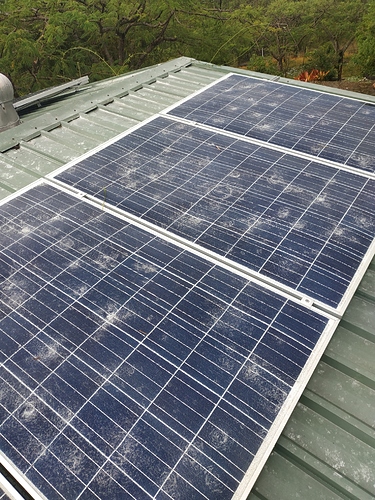 Disheartening to see what can happen. I hope it has been replaced OK?

We had hail 25-50mm hit at the end of 2019. Several of the neighbours have had successful insurance claims to replace the roofing iron (colour bond). This had been due to denting from the impacts. Surprisingly our solar PV survived. The hail was on the upper size for the product specification.

Is there an issue with insurance?

None of the PV panels we considered were rated for hail in the 75-100mm size range. I had to go back nearly 100 years to find hail as large as 50mm being reported in the near area. Hopefully it will be another 100yrs to the next time.

P.S.
There are parts of our state (Qld) I would suggest are hail prone. I’d wonder what might be best if we lived in one of those areas and chose to install rooftop solar.

We have lived in area of Yeppoon over 50yrs so Yes I hope it is a 100yr event, I don’t think you could afford Solar PV panels that could withstand this sort of hail, Our Insurance is still going through the assessment due to damage to House and 4 sheds.Blackwater got hit by servere Hail storm about 12yrs ago, nearly every roof had to be replaced, luckily before Solar PV’s were commonly available. One surprise was our nearly new NBN Fixed Wireless Antenna on the roof, can’t see a mark on it, our Foxtel 1.2m satelite dish has a slightly bent brace so you can build somethings to withstand this large hail.

I prefer to have solar panels installed on the ground on a frame, in that way you can cover them up with plywood in the event of a storm (or ill intended vandalistic neighbour with sling shot which are still legal in QLD), you can always remove the plywood after the threat is over to allow the system to re-charge. Unfortunately most installers refuse to change their design.

Welcome to the community, @pr2jd2b.

It’s an interesting point. We had the same response. It was surprising being on many acres and having some shading issues near to the house.

The most common argument against from those in the industry is the extra cost compared to roof mounting.

Depending on the local authority it may also require planning permission and approval. (Fees and design) The ground mounting system also needs to be designed to a standard that meets local wind loadings. There are numerous existing designs, but councils being what they are typically require each install individually certified.

Electrically the supply authorities in Qld were also placing restrictions on the length of the interconnecting AC cable between the inverter and connection point to the household. There are some technical considerations that a simple absolute rule was intended to overcome. Exceptions required a supporting electrical design and sign off. (More cost)

Our interpretation was that suppliers are either too lazy to do the extra work or afraid of loosing the job because the increased costs make the payback too long.

Our Rural PV supplier has a store front surround by ground mounted panels and a tilting and tracking post mounted frame. It can be done. We sized up our shading issues and went with roof mount. The cost of ground mount frames, council approvals, a 60m remote cable run more than doubled the cost of a basic 5kW system. And we would simply exchange one lot of shading issues for another.

P.S.
Hail is hail. If any one can reliably forecast it great. The number of storm warnings we get these days, a life spent boarding up and unboarding panels. Assuming you are home.

Panels on rooftops are covered under our home insurance. A not structurally attached ground install might require an additional clarification with your insurer to be sure they are included.

sling shot which are still legal in QLD

Slingshots are legal to own in Qld but their use is strictly controlled.

If you have been charged with Dangerous Conduct with a Weapon Prohibited Generally you have come to the right website! Call 1800 476 887

…solar panels installed on the ground on a frame, in that way you can cover them up with plywood in the event of a storm

Bird netting with 1 - 1.5cm spacing is more than adequate to prevent damage to PV panels from hail. The small hailstones do not have sufficient momentum to damage panels, it’s the >25mm stones that do the damage.
Just mount the netting ~30cm above the panels and make sure it is taught, so no large hail stone can impact the panels. The same system works for evacuated tube hot water systems.

Quick and easy to cover your PV panels when ground mounted, and could be left in place during periods when hail storms are likely - usually only 1 to a few days at a time several times over the spring-summer period. Cover and uncovering should be easy in a few minutes if set up correctly.

This may have insurance implications as well. Solar panels attached to the rood usually becomes part of an improvement of the house and is covered by house insurance. Installing them separate from the house they may need their own separate insurance/notation on a insurance policy. This could increase annual insurance premiums based on the additional value of the panels and the additional risk of having them on ground level (higher risk or theft, accidental damage etc).

. Installing them separate from the house they may need their own separate insurance/notation on a insurance policy

Not necessarily, NRMA didn’t charge me any more, but I’m not entirely sure the woman understood the concept of “not mounted on the house roof” when I was explaining it.