Snickers Made in China

I bought a snickers bar at Woolies and not till I got home did I discover it was made in CHINA…
I was horrified as I would not buy any made in china food items. 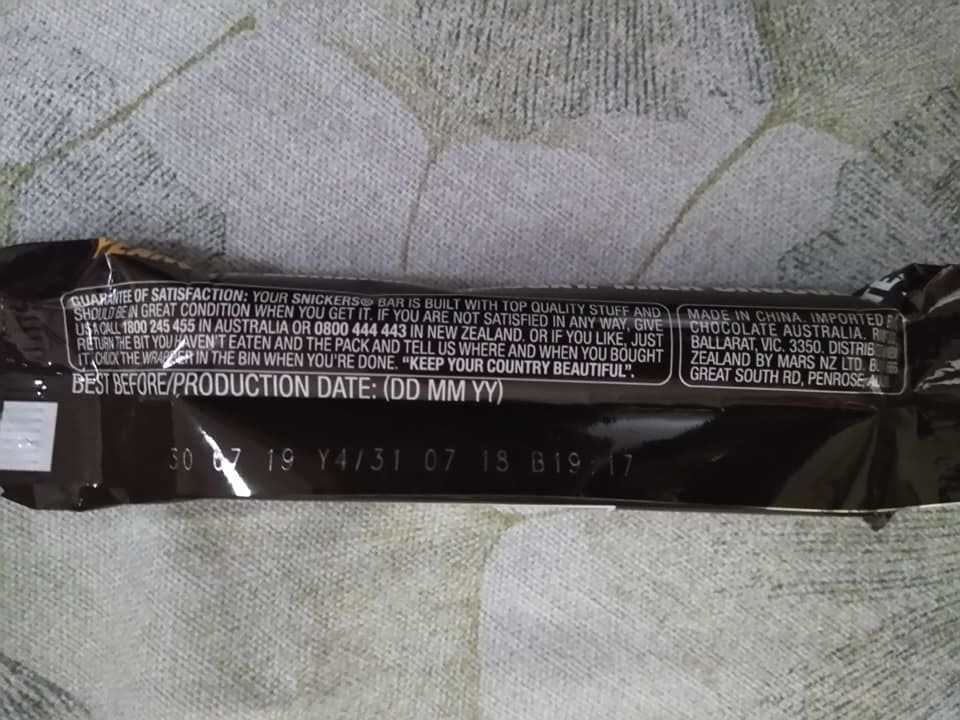 Can we assume, then, that all Mars products are also Made in China?

You would have to check the labels.

If they are, I will never eat them again.

If the Chinese don’t trust their own food manufacturers, then I certainly won’t.

I have checked Mars bars and they are Not made in China.
would need to do more research on the other products to check them.
I just find it annoying that I am now a compulsive label checker to make sure it is NOT made in China.

not buy any made in china food items

It is probable that if the Snicker was made in say the US, Australia, NZ or elsewhere it would have the same ingredients from the same origins, which could be a mulitbational affair like those which are manufactured in the US. The plant and equipment used to make the Snicker bars is also likely to be the same as that which would have been used elsewhere.

It is likely that the main difference will be the place of the manufacturing and the labour used to manufacture it, both China/Chinese.

Unfortunately, like many low cost products, such manufacturing has moved to those countries which have lower labour costs to maintain company profits whist minimising product costs to the consumer.

There has been many past food quality and safety scandals in China from poor product quality handling/processing or inappropriate ingredient substitution/additional. These have generally been restricted to local Chinese owned manufacturers. This is principally why foods (e.g. powdered milk, fruit, veges, meat and cereals) from countries like Australia are sought in China and premiums are paid for such products.

The major multinational food manufacturers like Mars would have and implement stringent food quality controls in China no differently to that which they would otherwise implement in other countries where they also manufacture foods. This is to protect their reputations and also to ensure that the same products made anywhere in the world are of consistent quality, taste and aesthetics.

If I ate Snickers, personally wouldn’t be concerned about the product made in China. I would however be concerned about eating 'fake ones/local Chinese copies’ which are unlikely to have been manufactured with the same stringent controls.

Spot on, phb. Thanks for the analysis!

It doesn’t even taste as good any more so I believe the quality isn’t there either, it’s why I found out that it was made in China in the first place.
It comes down to taste and quality as well as value for money, I also like to support Australian made when possible. Although 100% Australian made with Australian products is hard to find.

While it could be irrelevant and misguided regarding Snickers, many food and soft beverage companies do have different or subtly different recipes for different markets.

The classic and easiest to cite is Coke - in much of the world they switched from cane sugar to corn syrup many decades ago. Some regions still get it with cane sugar. It tastes different. Sometimes it is an economic decision but not always. Some markets are more sweet toothed and some prefer subtle flavourings, so it would not surprise me if there was a difference depending not so much on where manufactured, but where the product is destined for official (not grey market) sales.

[quote=“TheBBG, post:8, topic:17251”]
many food and soft beverage companies do have different or subtly different recipes for different markets.[/quote]

While I haven’t ‘enjoyed’ eating multinational fast food when travelling overseas, we often hear of tourists complaining that the major chain fast food products taste different to that in their home countries.

I would be surprised if Snickers would have vastly different recipes for different markets, as the product is a sweetened peanut flavoured chocolate treat food. Assuming there is a subtle differences in taste or sweetness due to say a plant adding slightly more of one ingredient, I suspect one would need ro be a real chocolate connoisseur …and do potentially double blind tests with products with different factories to determine if there is a detectable difference.

Like the placebo effect, ones taste can be affected by ones perceptions or views. An example is eating somethng one thinks is disgusting. If one doesn’t know what it is it may be tasty or even delicious, but once one knows what it is it all of the sudden becomes disgusting or not worthy of eating. We have tried this with friends and family with kangaroo on the BBQ…not telling them until the meal is half eaten. It is amazing the reaction for something once it is known. Some all of sudden stop eating the meat, while others continue thinking that it tasted good before knowing so shouldn’t afftect the taste knowing what it is. Knowledge can easily bias one perception.

It appears that Mars has been making some of its products in China while its Ballarat factory is undergoing an upgrade.
Some posts about it on the Facebook page and other forums