What is the difference between a smart and a dumb TV? All I want is a smallish TV that you plug into a power point and with which I can also watch stuff on DVD’s and (yes) videotapes. A slot for watching photos on camera cards would be handy too.
What should I be looking/asking for? And is there are service that can set up the ultimate selection so that it works?

My definition is you can install applications, or some applications come preinstalled, on a ‘smart’ TV. They will connect to the Internet via various means for streaming or web browsing.
Trouble is that many smart TVs turn into really dumb TVs over time as these applications become unsupported and out of date.

I prefer my ‘smart’ TV functions provided by a plug in device, and there are many and cost very little.

Dumb TVs are just a TV which one can view free to air digital TV on.

Smart TVs has the added benefit that they have additional functionality through connection to the internet. This being streaming video (paid or catchup) as well as other features such as media players and running some common apps.

Often Smart TV are smart when first bought, but become dumber as time passes and technology/support overpasses the version of the TV.

One can also make a dumb TV smart by plugging in a media box (such as a android or Apple device) which offers the smart functions to a dumb TV. The box is an additional cost. In some respects a dumb TV with a media box may be smarter in the long run, and a smart TV which will show its age over time.

The other consideration with buying a new or second hand dumb TV, check the digital receiver is both standard definition and high definition. If it only has standard definition (which some very cheap ones may have as well as older models), you will miss out out significant content.

Some Dumb TV have other ‘features’ such as DVD players and inbuilt programs to view photos (usually through a USB memory stick - you may need to copy photo files from the camera/computer to the USB memory stick). Check the specs before buying to see what it offers.

Dumb TVs also tend to be at the smaller screen end of the market.

Also, compare with a smart TV of similar size. You my find that they price difference between new dumb and smart TVs isn’t that great. This might help in your decision making.

My 12 year old Samsung (LA32B650) is a Full HD and is no longer smart in any way. Not that it ever really was. However the screen is still really excellent and paired with my appleTV, and my Fetch Mighty (which seems to do a better job than the ATV) I remain happy and content. I’ll only replace it when the screen dies.

Adding to the comment from @phb about the capabilites of dumb (and smart) TVs.
There is standard definition, the original high definition which was a joke, accepted high definition, and now ultra high definition. The first two used Mpeg2 compression, the later two more often use Mpeg4.
Your TV needs to support all of them.
Also, upscaling from STD to higher is highly desirable.

Thank you all. I am now pointing in a much better direction. But any further observations welcome. Just FYI here is a pic of part of the faithful old set up which has failed and which I need to replace - no internet, of course, to the set. 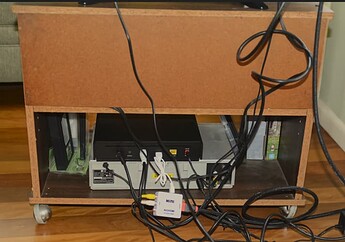 ??maybe 6 generations of technology in the past.

You need to check the inputs provided on the TV, dumb or smart.

You have a VCR, then analog RCA will be needed. That’s the yellow, red and white.
DVD player then it may be the same input and then you need two sets of analog input, or the output from the DVD player could be HDMI. That is pretty much the standard these days.

Then there was SPDIF and Toslink. Digital outputs from some devices, but I think has died out.

A capability to plug in a storage device with pictures or videos or audio is very desirable. An SD card, a USB port.

And lastly, ability to connect to a WiFi hub, if only to access basic Internet services like accessing Web sites and a bit of YouTube funny cat videos.

There are low cost adapters for that and some of the modern RCA inputs are not the '3 red-white-yellow RCA plugs ’ we ‘grew up with’ so a new cable could be needed.

Out of favour replaced by HDMI and old school, but still commonly supported for home theatre systems.

You need to check the inputs provided on the TV, dumb or smart.

Good advice. The inputs and the form factors should be checked since one might need to spend $10s and more dollars on new cables or adapters that could up the price of a dumb TV to a smart TV.

All I want is a smallish TV that you plug into a power point and with which I can also watch stuff on DVD’s and (yes) videotapes. A slot for watching photos on camera cards would be handy too.

One does not need to use the ‘smart’ but it provides a much wider choice in the market. I am not aware of many ‘dumb TVs’ available these days since the market seems to want internet and streaming apps, eg ‘smarts’.

is there are service that can set up the ultimate selection so that it works?

TVs usually come with a pictorial ‘quick start’ guide showing what plugs in where. This from a recent Sony.

For a basic system as you described the callout fee for plugging in a few cables might be offputting while setting up a complex networked home entertainment system with all the bells and whistles (and potential compatibility and setup requirements) could go the other way for the less technically inclined.

There are many services such as this random one but note they focus on ‘full service’ from wall mounting to everything else, and most if not all will provide free quotes. You might check if you have a friend or neighbour who can help out unless you want your ‘smallish TV’ wall mounted when a service company might be appropriate for piece of mind in that the TV would probably be fixed to the wall so as not to fall off.

If you’re like me - a dumb TV. I replaced my dumb TV with a supposedly SMART TV. The instructions are vague - and I’m probably too old to use any of the features.

Maybe for a tech-whiz - but not me.

The problem I’ve had is that it sometimes ends up somewhere I have no idea what it’s trying to do - and I’ve ended up doing a to get back to where I want it - watching TV or video from my HDD Recorder.

Can’t smart TVs also track your viewing and insert targeted ads in the stream? In other words, send stuff you didn’t ask for and collect data you’d rather not give them?

Is this true, at least potentially, of all smart TVs? Or only some brands?

Can’t smart TVs also track your viewing and insert targeted ads in the stream? In other words, send stuff you didn’t ask for and collect data you’d rather not give them?

Generally they do not do this, and Samsung got a lot of negative publicity a few years ago for having a TV that listened for commands.

The real worry with a smart TV is connecting a device to your network that is not necessarily designed to be secure and almost certainly will not be supported with software updates in a few years. On the positive side, you can buy a smart TV and not use the ‘smarts’.

Another thing to consider, Greg: you can make a dumb TV temporarily “smart” by connecting your PC to it using an HDMI cable. In effect the TV becomes a giant external monitor.

You have to do everything (play, pause, etc.) through the PC so it is a bit less convenient than controlling everything through your TV remote. But if you mainly want to watch free-to-air TV, videos and DVDs and occasionally bring up a YouTube clip or iView/SBS On Demand, this might be the best of both worlds.

Some do and some more than others. There have been reports in other threads of some brands now putting advertisement placement through their own operating platforms - I can only guess to provide an additional revenues stream after the TV is sold.

Most streaming apps now require one to log into them…which means there is opportunity to direct advertise to the TV based on information profiled by data harvesting companies (Google, Apple, Facebook etc).

There is ways to avoid such linkages, but using a different email address for each login (never take the easy option of using your Google, Apple, Facebook etc logins for the streaming apps - this makes targeted advertising almost a certainty. The only data which may be collected then would be viewing habits.

Some apps also currently run stock advertisements, such as Free to Air catchup TV. This may change in the future as consumer/viewer profiling and targeted advertising is more lucrative.

Smart TV’s are nothing special.It depends what set up you have as well

Thank you one and all.
I am now a lot better informed.
Actually the solution was simple. The remote had packed up. I had to scout around a bit to get a genuine panasonic replacement for that model, but not too much trouble. Now the rather ancient heap of gear shown in my photo is up and running again and allows us to watch all free to air, DVDs and tapes. WE did not have to buy a new TV this time, but I feel that is not too far off and your comments will be most helpful for that.

They could just use a monitor and a set top box to get TV and noting that many STBs come with the ability for other devices to plug into it, so likely they can add their DVD and VCR player.

May end up being dearer than just buying a small smart TV though to attach the STB to.

May end up being dearer than just buying a small smart TV though.

Possibly, but less at risk from obsolescence of the smart TV due to limited software update. Lower cost if replacing a STB or attached smart device such as a Fetch, Roku, etc.

obsolescence of the smart TV due to limited software update

That depends on personal priorities, the cost of the TV, and whether the cheapest solution suits. Does the consumer prioritise an all in one or is the consumer happy to manage a peripheral?