I had a 2 year old back up hard disc ‘fail’, I haven’t lost files, but now having to replace the disc, I have the quandary of how to dispose of it securely, without giving away the information on it.
Geoffrey

I assume you are talking about a disk drive, otherwise the following may be painfull.
Half a dozen lusty blows with a hammer, and then in a recycle facility.

I have the quandary of how to dispose of it securely, without giving away the information on it.

a) If you have a drill, drill a hole or two through the whole thing, about half way from the centre to the edge; or

b) if it is still operational run a data shredder on the entire disk. There are many free ones on the net to download. When it comes to data, recycling leaves traces of information on storage drives that can be retrieved using special software. However, this scenario can be avoided by "shredding" data rather than simply emptying your recycle bin. Here's how.

c) a hammer might work fine but if seriously worried about your data being taken you need to destroy the rotating disk not just the electronics or external package so use a big one. The chances anyone would extract the disk itself and try to recover it with different control electronics is less than very small, but I know a government that routinely did it back when.

Platters on hard drives are made of glass or aluminium. A hammer is going to make light work of them making them totally unreadable.
Now SSD drives I haven’t yet needed to dispose of after failure.

A hammer is going to make light work of them

For non-practitioners hitting the physical platter(s) with a hammer will bend and destroy them. Bashing on the case they are in is just exercise. A layman’s perspective 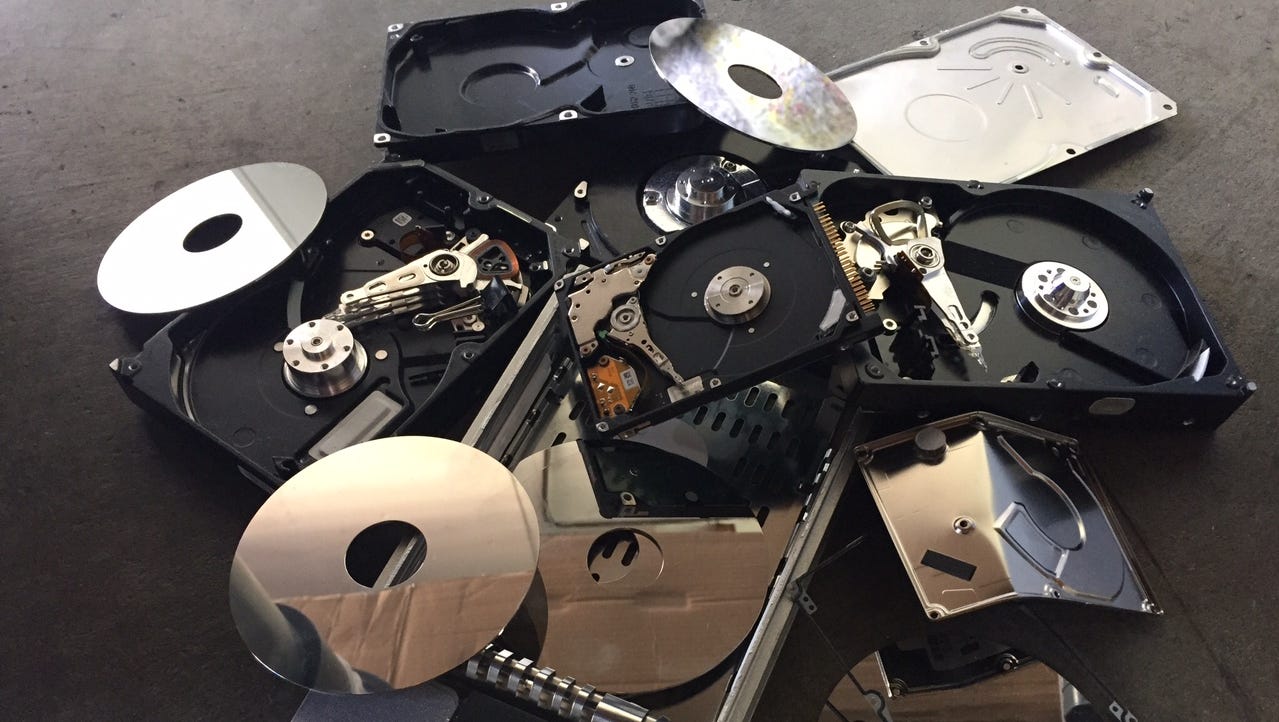 Just whacking a hard drive with a hammer doesn’t do it. Think microwaves, shredders, drills

and some practitioner comments from a Which? suggestion

and while drilling is listed the hammer is not. 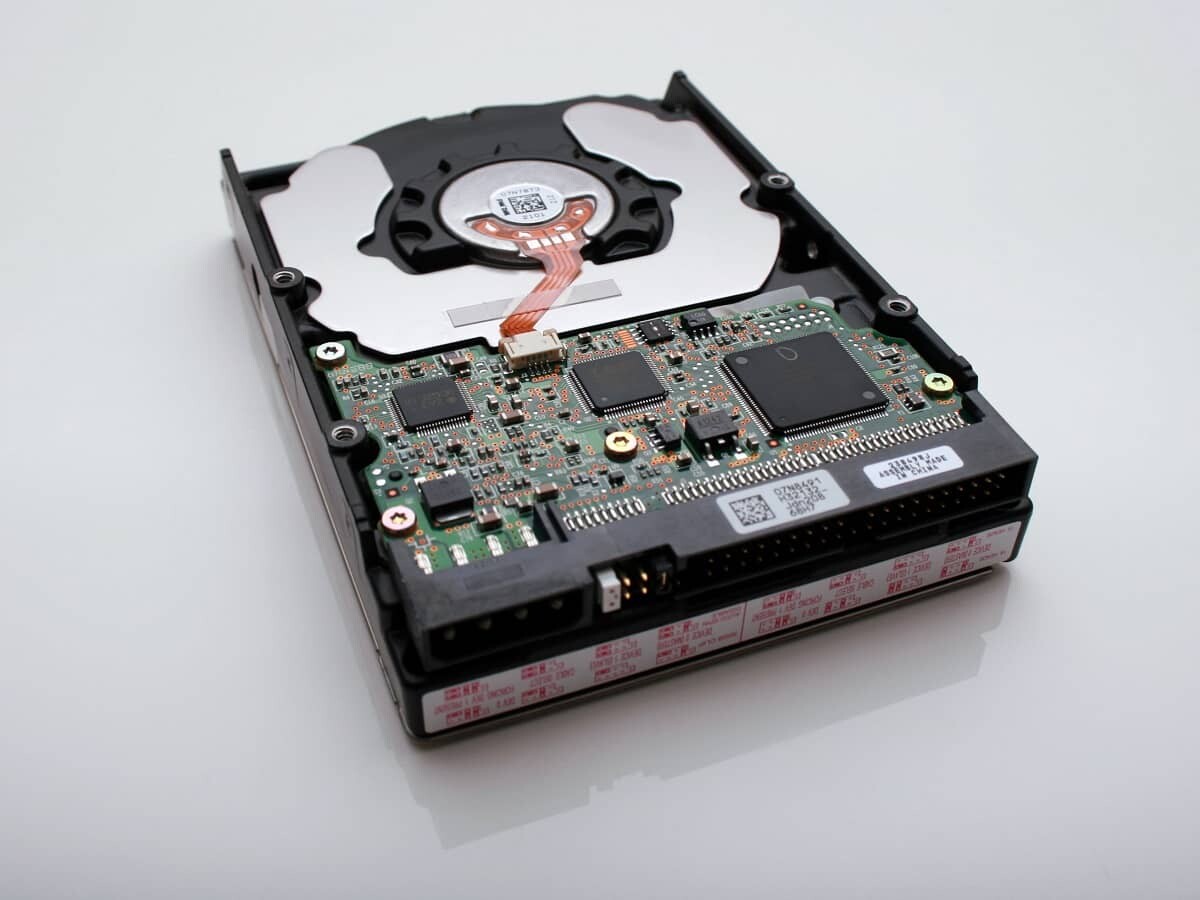 For non-practitioners hitting the physical platter(s) with a hammer will bend and destroy them. Bashing on the case they are in is just exercise. A layman’s perspective

Oh dear. How very condescending and dismissive you are. Perhaps those ‘experts’ out there do not realize that there is a world of difference between a few slight taps on the outer case, and really getting stuck in and bashing the disk unit to destruction with a hefty hammer.
Perhaps these ‘practitioners’ in their office environments cannot actually find a decent heavy hammer to test with and have to substitute a stapler, or maybe a shoe?

How very condescending and dismissive you are.

I’ll leave the best practice to speak for itself, noting this forum is not always frequented by people who understand the difference between beating on a HDD case and affecting the platters inside. My apologies if you felt it condescending as it was not intended. It was intended to correct the record in how to best destroy the data on an old HDD, that as the links suggest does not include the hammer solution.

that as the links suggest does not include the hammer solution.

True. But of the links you provided two are just click bait sites, and I have always considered the third, the Register, as a semi-serious satire site for IT. Been reading BOFH on their site for many years.

Please feel free to cite your own references, however I could find none involving a hammer that did not include a nail (pounded through the platter) or directly attacking the platter itself to bend it and affect the surface, and for the latter one needs a torx for disassembly (although a minor cost). I personally find the ‘drill solution’ to be easier on the arm; YMMV.

Some non-practitioners (eg non-techies) think breaking the electronics board or connector is sufficient to forever make the data on the drive irrecoverable. In a practical sense it probably is, because one has to wonder how many bad people collect old HDD from rubbish/recycling with the electronics smashed or case bent up and try to spin the platters up to see what is on them. It might only take one though

In truth I knew a few back in the 1980s who worked for ‘the government’ who did that, but they did not spend time on random HDD, just ‘select’ HDD collected from ‘places of interest’.

Some non-practitioners (eg non-techies) think breaking the electronics board or connector is sufficient to forever make the data on the drive irrecoverable.

Unless you have data in which a government may be interested, bash it until the board is broken will generally be sufficient. Hard drives are definitely not ‘low-hanging fruit’ for people who are looking to steal/sell data, as the Internet provides more than enough opportunities.

Always consider risk and benefit. While I would generally run something like DBAN before disposing of a hard drive, I have used the hammer method for at least one (it was particularly old and unused) - and feel confident that nobody cares enough to try to recover the low-value information that was stored on it.

My references are from personal experience in disposing of HDDs over the years.
Believe me, after some hammer work, if you pick up the drive case and shake it and it sounds like a tin can full of nuts and bolts, you just know that those platters are never ever going to spin up again.

If you look at the case of the HDD, you will see that they are held together with screws. If you have an appropriate size and shaped driver, you can take the lid off the drive. (Some of the screws will be under the labelling.) This will expose the inner workings of the HDD.

If you are keen, you can dismantle the innards, including taking out the shiny disc platters on which the information is stored.

The rest of the bits can be thrown out with out fear of losing information. The platters can be put away, or smashed as suggested by others.

If you decide to keep the platters; to my knowledge it is nigh on impossible to get information off the platters without knowing the specific property details of the HDD they came from.

Yes, and if you are going to the trouble of dismantling the disk drive casing, inside you will find a couple of VERY STRONG magnets which can be put to use where you need a magnet strong enough to hold a significant amount of weight on your fridge, or wherever.

They can be used where ordinary magnets fail.

Smashing and shattering the platters will ensure no snooping govt or Spy agency will ever even contemplate data recovery.

I have the quandary of how to dispose of it securely

Since the hard drives still read and write, it seems a waste to destroy them and send them to landfill.

Rather than physically destroying a drive to remove any potential repurposing (such as a drive for video camera capture or converting to a portable drive), why not use data sanitising/cleansing software. The data is permanently removed usually by performing rewrites over ever sector in the hard drive. Once every sector is rewritten, the data is gone forever and old data can’t be recovered. Examples of software are…

In a past workplace were sensitive data was stored on portable device storage, the IT department would cleanse all old storages to permanently remove any data. They also used other tools/software to check scrubbing was fully effective. I can’t remember the software used, but it never had a failure where data or sector was still recoverable.

The old work storages could be used for other purposes or bought by staff to take home.

If one is over cautious, use a couple of different software programs with different methods deployed on the same disk.

Years ago (about 35 years) we used a zip program which had a scrubbing tool to do data rewrites on floppies to remove any written sector data. The same sort of cleansing still exists today.

It might also be a test opportunity for Choice for their computer magazine.

Years ago (about 35 years

During that time a certain government and maybe more than one could recover data overwritten 5 times. I am not sure what they can do today with ubiquitous ‘shredding’ software and encryption. All I could add is they are very clever.

During that time a certain government and maybe more than one could recover data overwritten 5 times.

Maybe reality and what is seen in movies are being mixed.

If done properly, it is scientifically impossible to recover the data. If it was, there would be software and can expand physical drive capacity by 5 times without compression.

Maybe reality and what is seen in movies are being mixed.

I can provide names

One was a ‘very special’ company Raytheon eventually bought.

You probably never worked for certain parts of a certain government or around those who have during those days? It was also possible to ‘recover’ core memory (pre DRAM days) to get a good but imperfect idea of what kinds of solutions were being performed on the particular machine even though not the specific application purpose.

And no, the recovering of 5 times written over data was also imperfect, but valuable in the context of purpose and the times.

I can provide names

You can provide names, but scrubbing done properly to a whole disk, it is impossible to read past data. Good cleansing programs write over every byte, either as a on (1) or off (0). It is impossible to determine what the data was. Only in movies or crime shows is it possible.

If it was possible, government and business wouldn’t sell off properly scrubbed ex-employee devices as they would be security or privacy risks. They would all be destroyed.

The nature of the fail is unknown, but unless it it a specific write fail but read could only occur, it is possible. If bad sectors, a scrub will miss these sectors and good luck recovering data from the bypassed sectors.

Good cleansing programs write over every byte, either as a on (1) or off (0). It is impossible to determine what the data was. Only in movies or crime shows is it possible.

In reality, how data is stored on disks is vastly more complicated than just bytes in say ASCII format.

Something like 10% of the total capacity of a drive is for control purposes.

Bad sectors blocked out. Track bit sequences, and sector bit sequences to enable the heads to know when they can start reading or writing.

The data itself is encoded using extensive error detecting, and enabling correction, bits.

Only the disk firmware is aware of what is going on at this low level.

The operating system is aware of some of this through device drivers as it maintains the file system on behalf of all processes on a computer.

I know of no computer system that allows application programs direct access to disks.

And if the disk cleaning software is instead a disk reading application as an operating system, with its own low level drivers, then that disk and everything on it is probably readable unless physically broken.