We put the Seagate Fast SSD drive (1tb) through our rigorous storage drive test, comparing it to models in our recent test of portable storage drives.

Do you use an SSD drive, and if so which one? 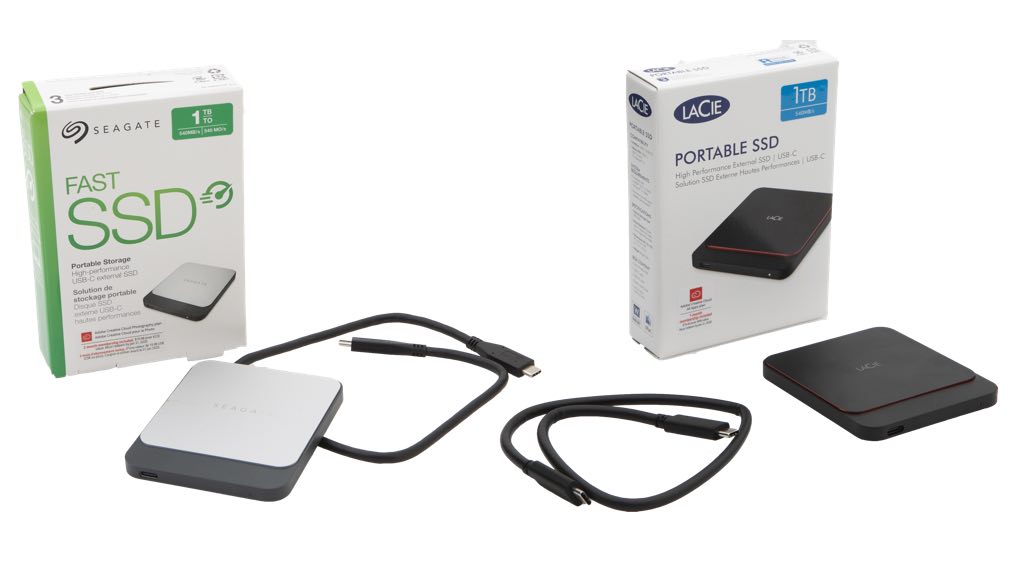 Seagate and LaCie's 1TB portable SSDs bring super-fast mass storage to your pocket or purse. We put them through our rigorous storage drive testing process.

I installed a Samsung 850PRO SSD in my laptop about 2 years ago. Much faster in boot-up and in general the the previous spinning disk, but a couple of weeks ago it developed a fault.
My computer was running, I was outside for about 15 mins and returned to a blue screen and “Windows failed to load properly” or something like that. I managed to start a disk scan a few times, but they didn’t compete before crashing. It would start sometimes, but always crashed to a blank screen within a few mins.
Only option left to me was re-installing Windows 10, which would lose everything.
I’ve been salvaging stuff from it running it as an external drive on a new (2nd hand) laptop also with a SSD, and have got everything important- didn’t even have to rely on backed up emails. I’ve been able to get everything I’ve tried for, despite the drive frequently failing to respond, necessitating power off-power on.
I’ll format and re-install Win10 on it and see how it goes one of these days when I feel like staying up until after 1am to use off-peak data, as a full Win10 install uses a significant portion of my peak data allowance.
The Samsung had been treated well, never run defrag etc, no more than normal use- plenty of file saving, but not much deleting, so it hadn’t had an excessive number of read-writes due to my activities.
Rather disappointing considering the hype around SSDs!

I have a 2013 vintage Asus UX31A notebook with an Adata 256GB SSD. No problems to date excepting the notebook runs more like a tablet (eg leisurely) than a PC. Not as impressed as I expected although it is a very low voltage mobile set to maximise battery life but even on max performance settings it is not exactly quick, even with I/O. I also miss the disk busy lights whereby you could make a good guess that something useful was being done, it was off to visit Redmond, or stuck in an endless process loop.

Hopefully @gordon I’m assuming you are aware the 850PRO has a ten year warranty as it is a level of price and performance above the every day drives. It appears you are betting on it being a Win10 issue.

I’ve had two everyday laptops with Samsung ssd drives. One purchased in 2009 followed by it’s replacement in 2013. Both are still working fine! Along with a desktop with a lesser 850EVO. The issues I’ve had with all have been Windows or driver issues. The SSD drives do make it much quicker to reinstall, except for the dreaded online update circus. It’s a pity we can’t order at minimal cost a fully up to date copy of Win10 on DVD or stick using your existing license and bypass the process. It took me 12 hours over 2 days last time I reinstalled an early version of Windows.

For general interest there is a software package called Samsung Magician if you have not installed it available on their website which will run a diagnostic test on the drive. My previous experience with Samsung and warranty on hard drives was very positive with a replacement new drive being provided via mail within a week of sending them the failed drive.

Thanks Mark, I’ll look into things with Magician and decide where to go from there.

I eventually found it, took a while though!

Unfortunately it isn’t very helpful. Either it has a problem due to it being on an external drive/card reader device, or else its a fake.

“The drive is not supported”

I’ll have to try installing Magician on that drive and see if I can get it running long enough as a C: drive in the old HP to discover the problem.

Isn’t technology a wonderful - it wastes so much time trying to make it work!

“The drive is not supported”

I have an HDD whereby the factory support software tells me I have a critical firmware update based on model and serial number - all automatic. When I try to flash the firmware it stops telling me the firmware update is incompatible with the drive. One can never tell about the veracity of factory anything these days, or the ‘good looking’ counterfeits.

Isn’t technology a wonderful - it wastes so much time trying to make it work!

Absolutely fantastic as I previously posted on this website.

In 2013 we bought a Sony Vaio Fit 15E laptop from JB HiFi. It came with an offer to upgrade from the installed Windows 7 to Windows 8 for the cost of P & P. I installed Windows 8 and over time, it upgraded itself to Windows 10. It progressively became slower and slower until it reached the point of almost being unusable. The hard drive was obviously clapped out. In March, I replaced the drive with a Toshiba 860 EVO solid state drive (SSD) and reinstalled Windows 10 and all the other software. …

We did have a strange problem with the laptop when my wife turned it on yesterday morning.

The screen was blank but the power light and fan were working so I suspected that either the RAM or the motherboard had failed.

I turned it off and removed the battery for an hour just in case it had suffered some sort of glitch, before I started to remove the RAM.

I replaced the battery, and to my amazement, it then worked normally, and there was no problem this morning.

I am waiting for our local computer parts supplier to get more stock of Samsung 860 EVO 1TB SSD drives so that I can buy one for my wife’s sister’s husband to replace his fourth failed 1TB SATA hard drive.

You can download the latest build of W10 from Microsoft at no cost. Burn the DVD and install, there is no “update circus” after such an install.

I have used many SSD drives as replacements for failed old 5400 or 7200 drives.

In all instances Windows boots many times faster, and the usage experience is always better.

BUT - note that many older laptops (and current cheapos) do not have a very fast set of sata ports. They don’t need to, to max out a crappy old 5400rpm 250gb drive. So when you update to an SSD, you will rarely if ever get the sort of i/o the disk can manage.

The best part of installing the SSD on an old laptop is the new boot speed, and the significantly improved battery life (assuming the battery still has some life…).

You can download the latest build of W10 from Microsoft at no cost. Burn the DVD and install, there is no “update circus” after such an install.

That installs a new baseline but the monthly updates continue. 6 Months later a new build, and it too gets its monthly updates. New builds often get ‘important updates’ very soon after release to fix pervasive problems. Each build download is (order) 3GB in its own right. For those using data-limited plans it remains an impost. BTW, during the install from a build it still checks for and downloads the latest applicable updates

Some people will always whine about Windows updates. Over my IT time they have whined about updates from Windows 3.0 to 3.1, WFW, etc, etc.

But in reality Windows 10 is a lot better than W3 was. Monthly updates are a benefit to most users, as there are countless millions of users who don’t run antivirus/antispam/antimalware so they need the security patches to help save them from themselves.

BTW during the install you can disconnect your internet and it won’t check for and download any recent patches. W10 Pro asks the question, not sure about W10 home because I would never recommend using it. Pro is the way to go for you, as you can turn off all updates and save your data plan.

I use the Crucial. Recently upgraded to a 2TB as the old one filled up. had the 1TB for 5years. No problems yet. certainly sped up the computer.

I use Hard Disk Sentinel which monitors the Health of all SSD and HDD drives, and warns you of failure so you can rescue the data before the disk fails totally. It had recently (5 weeks ago) warned me about an old 1.5TB HDD I had important documents on was about to fail and enabled me to save everything before the drive did fail. It also Gives estimated remaining Lifetime of the drive, Drive Temperature, Drive Information etc.

Online backup service BackBlaze regularly reports on its servers’ performance and these reports serve very nicely to help select reliable and long-lived hard drives. I cant remember how many Seagate drives are in the BackBlaze server farms but think it is about 20,000.
This is a good online backup service and some additional reports such as reporting on its drives is an added bonus.

Only option left to me was re-installing Windows 10

If you have another Windows 10 machine, you can create a Recovery Drive for Windows 10 on a USB. You can use this instead of downloading.

In April 2016, I did a technology uplift at home, which included the purchase of new desktop PCs. The hard drives are Samsung 850 evo 1TB Sata III SSDs. I edit and convert large RAW photograph files and the SSD (and processor, RAM and architecture) make the world of difference to the processing speed. All tasks - including boot-up and shut-down, IP camera video downloads, video editing, image processing and data backups - are highly performant. The drives have operated without fault. I’m very pleased with the purchase.

The internal version of the Seagate 1 TB SSD is currently available for around $190 retail, then buy a USB 3.0 2.5" external enclosure for around $20. You can use it on a USB 3.1 socket you just need the right cable to fit the USB 3.1 C port on a computer. If you want to actually go for a USB 3.1 enclosure they can be obtained for about $50 making the total cost between $210 for USB 3.0 to about $240 for USB 3.1. This would save you about $260 or more on buying the complete Seagate external USB 3.1 drive…maybe get a second one with the savings?

I searched at MWave (as an example of a online retail store so it is not to be taken as a recommendation) for retail enclosures and I have posted the search link here so a sample of prices can be seen: