Yep, found the same video and this is exactly what happened. Tried twice with the the retailer to no avail, with all the same evidence and arguments. Zip.

I wonder if the film can be bought by itself…and replaced on the screen. This might be something you can do (a DYI project).

Funny you should mention the lack of explicit instructions. The first Samsung rep I spoke to kept arguing that if there was no sticker on the screen to say to remove it (apparently some Samsung TVs have such a sticker) then don’t remove it, but I countered by asking how I was supposed to be guided by the absence of instructions??

Nuh. Apparently not possible according to the repair company (who have actually been very understanding and informative). The film is not provided as a part from Samsung nor is it possible to attach it other than as part of the manufacturing process. Requires a whole new screen with film attached, which is why the quote is so pricey.

The film is not provided as a part from Samsung

Maybe not Samsung, but there seem to be other sellers of polarising TV films. Don’t know if it works though.

ACCC’s reply states “You can approach the manufacturer directly, however, you will only be entitled to recover costs from them, which include an amount for reduction in the product’s value and in some cases compensation for damages or loss. You cannot demand a repair, replacement or refund from the manufacturer.” They suggested I could try small claims tribunal but there are costs associated with this and it seems like a long shot anyway, from what I’ve read.

Hey thanks for this! The TV is a graduation gift for my daughter, so I’d really like to get it back to new condition, so I don’t reckon I’ll take a chance with some Chinese film and a DIY. However, what you’ve found here is still really interesting. Really makes me wonder why it is that Samsung can’t supply the film to an authorised repairer. Well, I guess it’s obvious why they don’t.

Well, I guess it’s obvious why they don’t

Sometimes those tribunal can, work but depends on what you are disputing. As, i found with a, complaint i had,. Even with the so, called free law, service that is, offered it never helped me . I learned that the hard, way. But maybe your case is different to be heard.

This sounds very much like a problem Samsung buyers had with the first Samsung Galaxy Fold phone.

Yeah, That's Not A Screen Protector On The Samsung Galaxy Fold [Updated]

I would suggest that Samsung has failed in its basic duty to inform the consumer. We have been trained to peel that plastic layer off our electronics over a couple of decades. If it is not supposed to be peeled off Samsung needs to tell the consumer - as it did in this image, taken from the article above, of the phone as shipped (i.e. after reviewers discovered the ‘issue’). 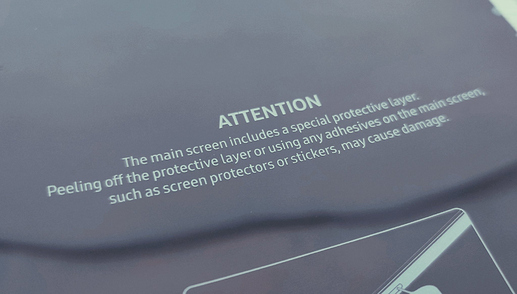 That may be one way of presenting your case.

Yikes! It seems Samsung are serial offenders with this issue. This will be very interesting to follow. Hopefully enough people will make enough noise that there will be some sort of action taken.

Please provide the model number and, if possible, a link to an online version of the setup guide and manual.

I’ve had a look at both pages of the user manual. Whilst it mentions some fairly obvious things like not carrying the TV by the screen and keeping it away from heat sources and water, it mentions nothing about the not so obvious i.e. not removing the film from the screen.

The Samsung website does not include a setup guide on the page relating to your model, but it does for some other models. Did one come with the TV? The earlier link provided by @phb includes a diagram instruction possibly indicating that for 50 inch and larger models something should not be removed from either the frame or the screen. Your slim chances of getting a resolution would improve if you did not receive a setup guide or you have one that didn’t include a similar ‘do not remove’ message.

It might be worth getting some information from a different retailer about this issue. They may be able to tell you if any of their customers have had the same issue, whether you should have received a setup guide and if any specific instructions have been given to retailers about not removing the film/filter when setting up display models.

Thanks Glenn. Well, this TV is a 43”. It did come with a written setup guide. We didn’t see anything relevant in the guide either as we were setting it up or after we found the problem. I don’t have it with me as it’s at my daughter’s house, but neither of us saw anything about the anti glare filter. The retailer hadn’t heard of other people reporting the same problem. I’m thinking maybe I’ll have one last shot and will contact the Samsung CEO and see how that goes. I might also request advice as to what is being done to advise customers not to remove the film, now that they are aware of the problem that is being reported. I’m just as invested in ensuring they take responsibility for preventing mishaps for customers, as I am in being compensated for the repairs.

But they could have had a removable label that says to not remove the screen cover. There was no such warning or instruction.

But they could have had a removable label that says to not remove the screen cover.

They could, but as outlined above, they could stick labels on everything or also have a long list of does and don’ts (trying to cover every eventuality of a user/customer in relation to their product) in their manuals. Because there isn’t a sticker doesn’t mean that a particular action could occur. The example used above is that the manual or user guide doesn’t state that a remote control can be washed in a dishwasher, so does it mean that since the manual is silent that the remote can be cleaned in the dishwater?

It appears that confusion arose as there was recollection that for an older Samsung TV one had to remove a protective film before use…and it was assumed that since there appeared to be a film on the surface of the new TV , it also had to be removed like that which may have been advised for old TVs, even though there was no information suggesting its removal. I will be interesting if Samsung accept this argument.

It should not be possible to remove a structural part of the TV. If you can, it’s a manufacturing fault that should be rectified by Samsung immediately. I have heard, anecdotally, that if you hammer Samsung in public they will cave in.
From whom did you buy the TV? It is the vendor’s responsibility to fix the problem. You contracted with that organisation, not Samsung. THEY contracted with Samsung, and there’s no contract obligation between you and Samsung. The biggest stick you have is to use Australian Consumer Law, who have to support you if you did nothing wrong. Ultimately you have social media and the product reviewing community on you side if you play your cards right. Put sh*t on Samsung products at every opportunity until they realise that you hare harming their reputation. I know a guy who bought an expensive German car that he said was a lemon. He parked it full public view, and he stood beside it holding a pair of lemons, and I think a sign. His publicity and determination made it to the media, and in the end the German company gave him his money back and told him to urinate off. Now he has a luxury Japanese car and is happy as Larry.

They could, but as outlined above, they could stick labels on everything or also have a long list of does and don’ts (trying to cover every eventuality of a user/customer in relation to their product) in their manuals

Even products which come with nothing more than a page of cartoon type graphics showing how to assemble them still usualy have green ticks for the right way and red crosses for the wrong way.

One of the first Jetranger helicopters to be available in Cairns some 40 years ago had previously been operating in PNG and it had cartoon type graphic images in front of the rear seats to warn the Nationals of dangers including one which showed a person walking too close to the tail rotor and being chopped up.

I have heard, anecdotally, that if you hammer Samsung in public they will cave in.

A sad reflection of just how little some busunesses care about their customers as Samsung previously demonstrated with their washing machines that catch on fire.

At least LG seems to have lifted their game after Choice forced the ACCC to actually wake up and do something years ago.

If only more businesses emulated the great product quality and even better after-sales service of Weber, there would be far fewer consumer complaints.