Robotic lawnmowers - anybody tried one?

Would like to hear whether any of them are really worth the money - have you tried one out? What was your verdict? What about the Ambrogio L60 - supposedly Australian made - worth the money?

I’d like to know, too. I wonder how much of the money I have spent on various lawn guys/companies could have been saved if I had one.

What about the Ambrogio L60 - supposedly Australian made - worth the money?

Not Australian made if you read the following.

Assume you have considered the alternatives from the well established and well known brands, such as Husqvarna, Stihl, Gardena, Honda, etc, rather than a lesser known manufacturer that is less well supported. 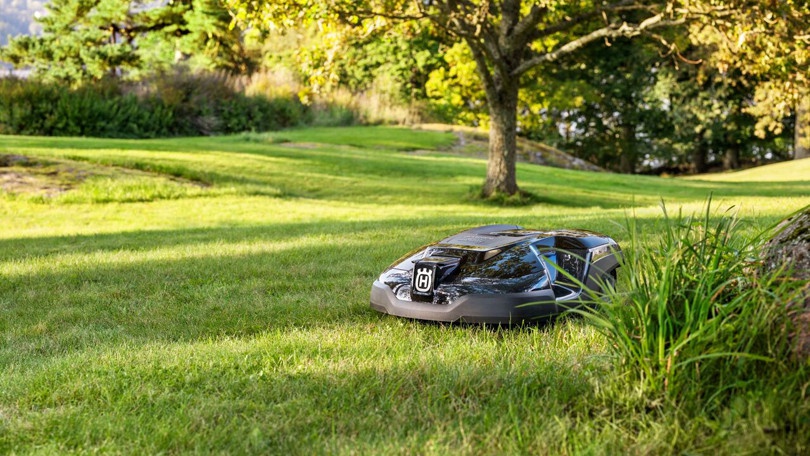 The Best Robot Lawn Mowers of 2018

If you've got better things to do than spend every Saturday pushing a noisy gas-powered mower around your yard, consider investing in a robot lawn mower and letting it do the work for you. Get started with some of the best we've tested.

I wonder how much of the money I have spent on various lawn guys/companies could have been saved if I had one.

Would like to hear whether any of them are really worth the money - have you tried one out? What was your verdict?

While we don’t have one, a house up the street has a Husqvarna robot mower which mows a blue couch lawn. The mower seems to entertain the local children’s fascinations for things which look and work differently.

While we don’t own a robot mower, some observations can still be made from the Husqvarna operating up the street as we see it at least daily (often 2-3 per day operating).

Some of the observations are:

While I haven’t checked, while the mower moves randomly, I expect that there will be limitations on the size of yard that can be mowed. The bigger the yard, the more likely that some areas will not be regularly covered.

It also may only be a proposition if one’s lawn is relative even and free of things like protruding surface tree roots, holes or rills. Based in the above observations, I can’t see the mover performing well on uneven front or backyards.

Also, the house up the street is fully fenced (with automatic sliding gate) and their foot path still needs to be mowed. I suspect that if the mower was let to run wild (it can’t get out the gate area up the street as there is a metal runner about 20mm high that prevents the mower escaping), it may get a life of its own and disappear. If one has a unfenced yard (either with neighbours or the street), one would need to investigate how to keep the mower within the bounds of the area to be mowed.

Disappearing is another issue. I expect that there is a chance of theft as the mower is visible and its charging unit also needs to be outdoors to allow the mover to dock for recharging. I suspect that being expensive and could fit in the boot of a car, it is something which may become attractive to thieves.

The last point is while it seems to be okay in cutting a fine leaf lawn like blue couch, I don’t know what the performance would be on larger leaf lawns such as buffalo or kikuyu.

I’ve posted suggesting Choice look at reviewing and testing this type of mower, given the advantages of battery operation and independence. The market appears to be delivering plenty of options.

While theft would seem an obvious concern for some situations, it might more likely be loss through mischief or one of those night time scavenger hunts. Garden Gnomes used to be highly prized.

The mower only mows within about 150mm of garden edges, walls, fences, Hills Hoists or other yard obstacles

PC Mag seemed to find no fault with the grass cutting or leaving edge strips uncut, so worth further enquire. Wet grass might be a no no as the mowers use a mulching action and need to drop the clippings as they go. 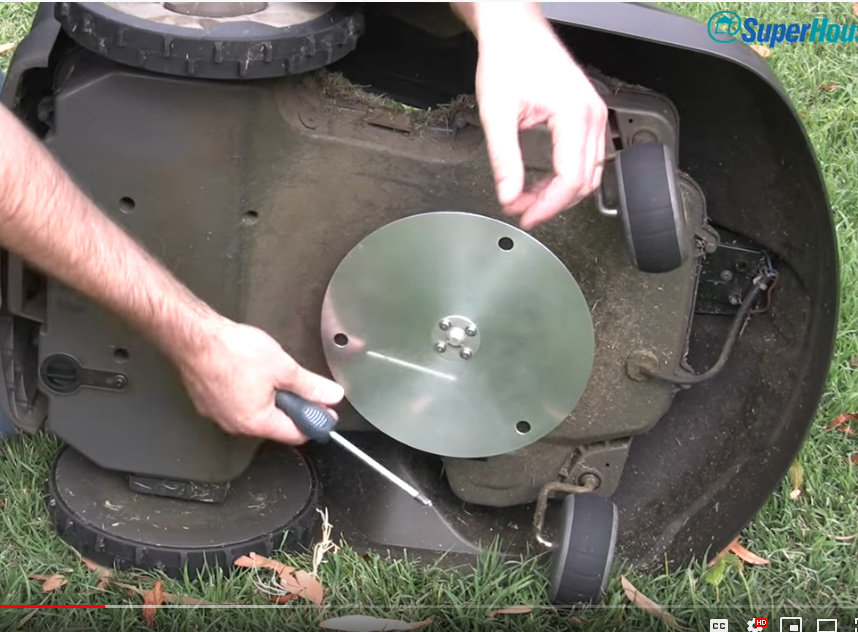 The photograph is from underneath a Husqvarna robot mower (photo capture from a Youtube video) and can see the blades are recessed some distance from the edge of the mower. The cutting blades protrude slightly beyond the silver coloured/shiny round plate. There is about 150mm (maybe more) between the cutting blades and the edge of the mower. This prevents the grass being cut close to obstacles.

REal world observations are very helpful, thanks! It won’t do, for me.

Thanks for your very valuable observations! I’ve not seen one in action yet myself, but will have to go out and see what the local shops say and whether they can demonstrate them – after all, they are not cheap!
And, I did not know the one I saw on Home & Gardens was NOT an Australian model … caught out by another inline ad!

I noticed some of the models shown used 7.5 A/H lithium -ion batteries . Check out the replacement cost of them . They don’t last forever .

Yes the batteries are expensive Graham @grahroll . I just purchased the new steel deck Ozito Cordless Lawn mower… The one I originally had my eye on , the iconic Australian( NZ )big V cost $584 and $899 at Bunnings wirh the steel deck .

Big difference in price . Both units had the same warranty . 5 years on mower . 3 years on batteries . Very impressed with the Ozito so far . Only problem it was a promotional model and not readily available yet . I believe Aldi’s may have a similar unit but at such a low allocation to stores be waiting at the doors at opening time for any chance to purchase one .

Perhaps it is well understood or perhaps not by all?

When comparing batteries on Amp-hour (Ah or AH) ratings the battery rated voltage is also important. The Total capacity of a battery is measured in Watt-hours (WH) or kilo-Watt-hours (kWH).

In making a comparison of Ah capacity alone the batteries being compared all need to be of the same voltage.

It would therefore be better to also note the battery pack voltage as well as the Ah rating and battery technology, EG lead acid, lithium etc.

I noticed in the Choice battery lawn mower reviews the battery voltages are listed as well as the Amp-hour ratings.

A further point is that some battery powered powered equipment may use expensive lithium battery technology, while others use much lower cost lead acid batteries (SLA or AGM), or Nickel Metal Hydride (NiMH). Depending on duty cycle, and frequency of use the cheaper battery technologies may be all that is required for a reasonable lifetime, and cheap replacement.

AGM is a type of SLA. Gel is another common form. There might still be flooded SLAs around too.
https://batteryguy.com/kb/knowledge-base/sealed-lead-acid-sla-absorbent-glass-mat-agm-vs-gel/
That’s going to make testing quite - errr - testing.

The Ryobi ones that are the bigger punch type are 36 Volts, not sure on the ones used for the drills etc they might be 24 Volt?? I think they also have a 40 Volt range but haven’t seen these. Online the pricing and AH ratings are different with a 2.6 AH 36V costing $245 and a 5.0 AH 36V at $299, I can’t see the 9.0 AH one but in the Store they did have one in the cabinet. Perhaps on sale as they get rid of older stock… On my Blower Vac it is a 4.0 AH 36V one so they obviously keep changing the ratings of their batteries.

not sure on the ones used for the drills etc they might be 24 Volt??

The Ryobi One-batteries for multiple tools are 18V.

Thank you for that @phb, as I don’t have those type Ryobi tools as I said I wasn’t sure. I tend for the smaller tools to use the ALDI Xfinity 20V ones. They are cheaper in most cases, can swap the batteries into even the Lawnmower just get the bigger 4.0 AH ones and they work across the entire range. Previously they had the Titanium+ 18V stuff but the 20V ones last well in all the tools I have used them in eg the Circular saw.

Forgot to mention the voltage on the Ozito batteries . They are all 18 volt .

The mower only mows within about 150mm of garden edges, walls, fences,

The Husqvarna mower in question leaves an unmoved strip of about 150mm on borders and walls…which require followup line trimming or traditional mowing to neaten.

The photo will enlarge if one clicks on it and then clicks again.

Yep, not buying one. It would be useless in my tree’d and rocky yard.

OT, but my experience with the Ryobi 36V batteries: I bought a mower that came with a 2.5Ah battery ( the one tested by CHOICE ), and purchased a second 2.5Ah battery shortly thereafter. I also bought a Ryobi chainsaw that uses the same 36V battery. That was several years ago, and I wasn’t surprised when one of the batteries died in 2018. The other is still going strong.

When that original 2.5Ah battery died, I went to buy another, saw the 5Ah version, and bought one of those. It has been a disappointment. After only a few charge/discharge cycles, it now only powers the mower for around the same time as the much older 2.5Ah battery. When the mower stops due to low voltage, the on-battery indicator shows that there is still around 40% charge left. For a while, Ryobi no longer had the 2.5Ah version - I see that they now have a 2.6Ah version. When I next need to buy a battery, I’ll probably get one of those.