Neutrogena T-Gel have a very well known Coal Tar shampoo which is a tad expensive…so I bought the Redwin equivalent that was sitting next door on the Woolies shelf to save some mula.

Couple of days after using it I had a really sore scalp…‘strange’ I thought, because I’ve never had an issue with Coal Tar before. Then I look again at the Redwin bottle…Coal Tar (in small font) ‘fragrance’ - no actual Coal Tar in it! Despite it clearly being designed to mimic the appearance of the T-Gel on the supermarket shelf.

So shonky…and dangerous for people with allergies! And for that matter, kinda Shonky of Woolies to allow the products next to each other in the medicated shampoo section. 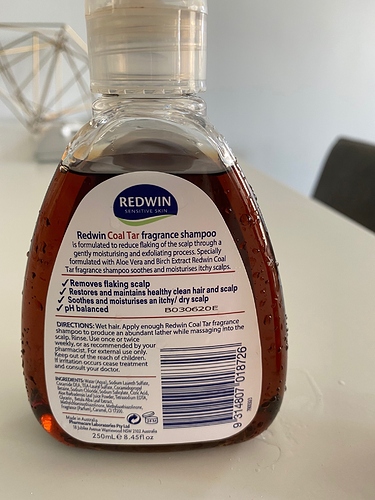 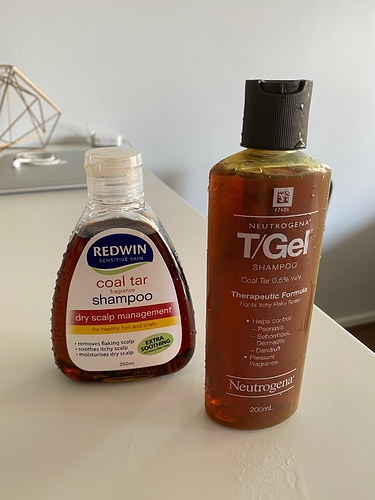 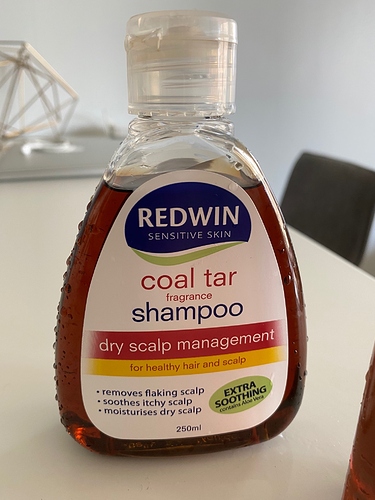 I have been using Ego Pharmaceuticals Sebitar Shampoo since a dermatologist in the mid 1980’s advised me to use to treat my scalp problem which was not only itchy but when I scratched it, it would appear like dandruff flakes coming away from it. Relief for itching and inflamed scalp.

I have also been using their Sebirinse Conditioner since the product was released. Highly recommended on my long and successful experience.

Despite it clearly being designed to mimic the appearance of the T-Gel on the supermarket shelf.

The colour certainly is close, but the presentation is quite different, so I don’t think it is an attempt to mimic.

So shonky…and dangerous for people with allergies! And for that matter, kinda Shonky of Woolies to allow the products next to each other in the medicated shampoo section.

You have raised a number of issues.

Firstly, if anyone has allergies, they should check the labelling, particularly the contents, very carefully. In this case I can see a list of ingredients (too small to read properly) on the back label.

The artificial fragrance & colour is no different to most other shampoos. In this case the product states quick clearly it is coal tar fragrance from and back.

The placement next to the Neutrogena product is again no different to what happens throughout the supermarket where the ‘home’ brands are place next to the ‘name’ brands.

In this case, I can’t agree that there was a clear attempt to deceive.

In this case, I can’t agree that there was a clear attempt to deceive

I’d argue there is an attempt to mislead. Deception might be one for a court to determine. If the word ‘fragrance‘ was equal in prominence on the label, IE font, size and style as the word’s ‘Coal Tar’, it might be other wise?

Consumers purchasing a Shampoo with Coal Tar are likely after the supposed physical benefits of the added tar. Anyone who has spent a lifetime around in the black stuff appreciates it’s ability to enter every pore and crevice of your body. The aroma of coal tar is much the same as hot often bitumen noticeable around road repair works.

I seriously doubt any seek out products for their coal tar “fragrance”.

I also suspect the fragrance of the Redwin product is far from authentic. Otherwise it might have similar sales potential as a BioNatural branded dynamic lifter fragrance Shampoo?

Yes it pays to read the fine print on the back label. Chook poo products included.

So shonky…and dangerous for people with allergies!

Most people with allergies would read the ingredients to ensure that a product did not contain an ingredient which triggered the allergy.

kinda Shonky of Woolies to allow the products next to each other in the medicated shampoo section.

Not necessarily, Redwin (PharmaCare) market the product as having potentialy medicinal benefits, namely, for:

If Woolworths was using the information provided by PharmaCare (or on the front of the bottle), then yes, it would sit within the medicated shampoo area in a supermarket and why it may have been shelved there by Woolworths.

One would assume that Pharmacare (and not Woolworths) has testing that backs up these claims. Woolworths isn’t responsible for testing all claims made by the manufactures for products on their shelves.

I’d argue there is an attempt to mislead.

I have mixed views. One could easily buy the shampoo if one quickly read the label and thought it was coal tar shampoo…the front label is not clear that it only smells like coal tar and one could be under the mistaken belief it had coal tar as an active ingredient. In such case, the front label is ambiguous and could be seen as trying to mislead a potential consumer.

On the other hand, if one reads the back label, it is more obvious that it is shampoo with coal tar fragrance and therefore less misleading.

Also if one only reads the main words when making a purchase, when a lot of companies would be in strife. There are a lot of companies which use words (brands, trademarks or company names) which gives the impression that the product is something it is not. A good example is the use of ‘eco’, ‘organic (or its derivatives)’, ‘green’ etc. There are a lot which use such words as marketing ploy (or puffery) to potentially give a false impression.

That’s at least a yellow flag for me, even a red one the more I dwell on it. It doesn’t say fragranced there, it clearly says Coal Tar Shampoo. They need to be consistent in describing it as fragranced. Very confusing and perhaps even deceptive if someone read it from the website when trying to see if it matched their need.

@dawkins.scott there are at least two ingredients in the Redwin product that for people with really bad skin/scalp issues should be very careful about. It may be safe for many but if skin irritation does occur it may be useful to try a product without these in it (that may be difficult as they are very commonly used). They are:

Methylisothiazolinone, MIT, or MI, (sometimes erroneously called methylisothiazoline), is a powerful synthetic biocide and preservative within the group of isothiazolinones, which is used in numerous personal care products and a wide range of industrial applications. It is a cytotoxin that may affect different types of cells. Its use for a wide range of personal products for humans, such as cosmetics, lotions, moisturizers, sanitary wipes, shampoos, and sunscreens, more than doubled during the f...

Just because a product presentation may be technically legal, it can also be highly misleading. Those of us who have succumbed to such dodgy (and I opine it is dodgy) labelling tend to be more judicious but still get caught out from time to time.

As @grahroll noted, Redwin’s ‘paperwork’ is also inconsistent, suggesting it is either sloppy marketing and labelling, or a conscious attempt to mislead. Considering Redwin’s corporate presence the former is most likely.

A formal complaint to Redwin with a cc to Woolies and the ACCC for misleading labelling would be my next step.

Great nomination @dawkins.scott, I’ll be sure to share this with my colleagues.

I thought it was for shampooing Coal Tar, like Baby Powder is obviously not made of babies.

“I seriously doubt any seek out products for their coal tar “fragrance”.”
Actually I buy Coal Tar soaps and shampoos for exactly that.

I have both the Redwin coal tar fragrance and T-Gel. Sadly, its T-Gel that gives me the itches instead of fixing them. I like redwin’s tea tree but theres probably no tea tree in that, either.

Hi everyone, thanks for an interesting thread.

I’m actually working on a story about cosmetic products that aren’t what they say they are, e.g. a product packaged as “goat’s milk soap” that doesn’t list goat’s milk in the ingredients.

I had someone email me about the Redwin Coal Tar (fragrance) Shampoo, too, and was pleased to find a very pertinent discussion about it here.

I may even include some of it in the article – let me know if you have any concerns about this.

And do let me know if you come across any other products used on the body (toothpaste, moisturiser, perfume, makeup etc.) that look like their making a misleading claim about what they contain.

Anything that claims ‘anti ageing’, ‘anti wrinkle’, etc might be a great general opening topic. One can look more youthful, in your own mind and from your friends who are too polite. We can’t stop time. But we can sometimes hide it’s effects.

I also wonder about all the products that claim to rehydrate skin cells. Really!?

On Google, I couldn’t get past all the scientifically proven and expensive products that offer to do just that. Apparently we all have deficient skin and need product XYZ three times a day, because …

P.S.
I’ve some great personal advice on skin care from my GP and a specialist dermatologist. We are all different, including how best to manage our outer layer of bodily protection.

Tea tree oil is clearly listed as an ingredient