Qantas while under Mr Joyce’s authority, has been ignoring the Australian Consumer Law legislation, fraudulently increasing prices on tickets, refusing to pay refunds for flights they cancelled, cancelling flights, and reducing staff.

This has the potential to be the largest Class Action Claim in our history, but the legal profession is strangely quiet. I suppose if you want to stay self regulating you can’t upset the Government.

See my post, dated 13 May, 2022 in the travel category for details of my complaint lodged with ASX
They have been strangely quiet. Their full disclosure policy doesn’t seem to apply to Qantas.
Another massive class action?

Re: Compensation claim; (Lodged with Qantas)

This claim is for flights on Booking Numbers 6WWBOM and 5JE5QY. I have not provided copies because you will have the originals on file. The original booking was made on 10 September 2021.

This claim is based on the provisions of Australian Consumer Law. (The Act)

On 29/12/2021 you changed our booking, without my knowledge or consent. You made no effort to enter into a dialogue with me to determine whether the changes were acceptable. You gave no explanation for the change.

The new date you selected was totally unacceptable. I had a booking for a cruise parting the day before.

I spent one hour twenty minutes on hold at 1:00 AM. in the morning trying to contact you, with no success.

I then spent a further four hours and thirty minutes from 6:00 AM. on hold before I was connected to your operator. That would not be considered, under The Act, to be supplying a service in a reasonable time.

Talking to your operator was totally disgusting and useless experience. Your operator was not interested in helping me find an alternative flight that was acceptable. All she was interested in was having me cancel your revised booking. Presumably so I would have to re-book, at inflated prices.

I was also told that the flight I was booked on had been cancelled. If fact it was re-numbered and rescheduled at an earlier hour. I should have been given priority access to that flight, because it was a replacement for the flight I had booked. When I asked your operator why I wasn’t re-booked on that flight she told me it was already fully booked. Unbelievable!

I eventually found a flight that was workable although it involved considerable additional expense for me. (Two nights in a Hobart hotel @ $220.00 a night, plus meals, taxi fares, and $360.00 for additional PCR testing at my expense etc.) Approximately $1000.00 additional. (I haven’t received the account from the Cruise Line for the PCR tests yet but one is expected.)

When I booked the flight you charged me an approx $800.00 additional That was for the same flight on Monday instead of Wednesday. Your Web page would not accept that change until I re-booked the second flight which was unchanged, resulting in a further charge which made a total increase of $1,603.98 for the changes. None of which were requested or required by me. I am entitled to a refund of those additional charges.

We had to cancel the return flight because we were placed in hotel quarantine.

When we came out of quarantine there were no Qantas fights available from Hobart to anywhere useful so we had to fly Virgin to Melbourne.

That makes total refund required $4,641.64. I have not included any claim for damages I am entitled to under The Act.

The changes to my itinerary did not increase your cost of providing the service by one cent, but you have increased the cost to me by $4641.64. In fact the changes reduced the cost to Qantas, because by cancelling some flights, all remaining flights were fully booked. Exactly the type of behaviour The Act is intended to prevent. Profiteering?

You have also consistently understaffed your help desk, making it impractical to obtain assistance.

You are making customers wait 8 weeks for a refund which would be devastating to someone with a limited budget. Simply because you haven’t put on additional staff to deal with the problems you have intentionally caused by changing bookings. A cheap source of working capital? You should be paying them credit card interest rates.

Claiming a refund on your web site is impossible because it just goes around in a circle. You get to “Request a refund” and it takes you back to “Manage your booking” and away you go again.

Your actions are unfair, and unconscionable conduct under The Act. You have also exploited your dominance, in the market place.

One of the main reasons so many Australians holiday overseas is cheap reliable air travel. Six of my last eight holidays have been overseas for that reason. You are further damaging the tourism industry because holiday makers have less to spend, at their destination, after paying your inflated fares.

I please find attached a copy of my compensation claim that I have lodged with Qantas.

This problem would not have occurred if the respective State Consumer Protection Agencies took a proactive approach and vetted company terms and conditions, when published, instead of waiting for claims and trying to negotiate settlements.

This situation would not exist if the respective State Consumer Protection Agencies prosecuted infringements instead of trying to negotiate settlements.

The punishment clauses in the Act are there for a reason. The clauses become meaningless if they aren’t enforced. All infringements should be prosecuted.

You would only need to prosecute one case to send the message and the number of complaints would decrease dramatically.

What is the point in having a law if it isn’t enforced.

You need to address these issues as a matter of urgency.

Most people would accept the claim by Qantas that they (Qantas) are complying with the act. If only one in ten, make a claim, Qantas is millions of dollars ahead over the years.

My options are limited. Perhaps publishing the correspondence as an advertisement in a newspaper would be cost effective and affordable. Especially with an election coming up. And I could possibly claim the cost of the advert. as damages. 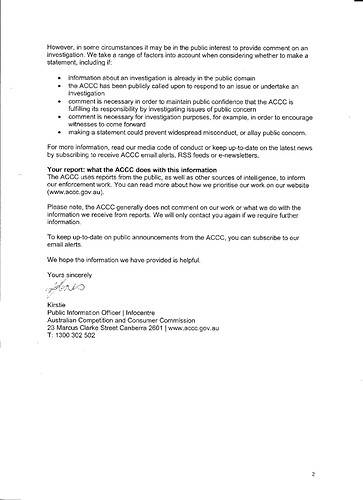 Slater and Gordon have a current investigation regarding a class action around travel claims, where interested parties can register their interest. This isn’t an endorsement of the investigation or the potential class action, so please do your own reading and consider whether you need legal advice if you decide to register your interest or become involved in any way.

Slater and Gordon are only looking at the voucher problem and are unlikely to start a class action. One wonders who is paying them. They are helping delay payments, in lieu of cash by telling people to write letters.

I have recently been bumped off a premium economy flight departing from Melbourne to London due to leave in a weeks time.

Flights had been moved, rescheduled all by qantas resulting in no flight at all. After hours on the phone with the call center, hung up on multiple times, laughed at for expecting a solution by customer service and also told to email to a customer service address and the bounce back informs me the address is no longer is monitored.

The situation after 4 days of calls was still unresolved. I have had purchase another ticket on another airline to get to a family wedding at a significantly higher price to the same destination. At this point i have no return option, out of pocket and no refund confirmation from Qantas. Qantas has “inadvertently” canceled my return flight because they wouldn’t refund half ticket.

In summary I purchased a premium economy ticket from Melbourne to Heathrow return 5 months ago. I’m advised that seat is no longer available due to Qantas cancellations however strangely a premium economy seat is available online for double the cost.

This has been happening for months. Although Qantas has been saying they haven’t cancelled any international bookings. What has happened strengthens my belief that Qantas is going bankrupt. Under Australian Consumer Law you are entitled to a refund plus damages. The ACCC which is supposed to enforce the ACT will do nothing. I suspect Qantas is making donations to political parties and therefore is being protected. Don’t book the return flight on Qantas. High risk. At the moment my best guess is we’ll be claiming damages from the liquidator. Copy of letter to editor

A summary of the situation (These comments are based on my claim, but I believe they are typical of the vast majority of flights, if not all.)

Fact: Qantas is cancelling flights on a regular basis, without warning or explanation.

Fact: Qantas has admitted liability for damages and refunds by offering flight vouchers as compensation. The offer of vouchers is just that, an offer. Consumers are under no obligation to accept.

Fact Consumers are entitled to a cash refund under the ACT and damages.

Fact: Qantas has extinguished any right to claim an exemption for damages or compensation for reason outside their control by:

Fact: The Consumer Protection Act allows the various enforcement agencies to issue compliance orders without receiving a complaint from a member of the public.

Fact: All of the various consumer protection failed to take any action, in spite of having numerous complaints and the authority to act independently.

I believe it is now essential that the various Protection Agencies explain why they have not taken any steps to enforce the provisions of the ACT. They should, if they are acting under instructions from their various Governments state that fact. Their explanation should justify their failure to act by quoting provisions of the ACT. They should also take immediate action to address the issue.

Both the respective Governments and their Consumer Protection Agencies should be fully aware that their replies could be a Government changing issue at their next elections. I expect a record number of independent candidates to be running at upcoming elections and I expect them to, if not secure an outright majority, to have at least the balance of power.

We have every right to expect our elected Governments to protect us from rogue corporations.

If you booked through a travel agent and they did not advise you of the risk of cancellations and refusal by Qantas to pay refunds the travel agent may be liable for your losses. You would need to demonstrate that the Agent knew or should have known of the risk. All travel agents should have been aware of the problem at least 6 months ago because of complaints by passengers.

A family member from the USA booked a QF itinerary for March 2023 in June 2022. So far there have been 3 schedule changes and a cancelled flight.

The purpose of the post is that when a flight segment was cancelled and a substitution made we had to ‘accept’ the change in ‘booking management’ for it to be effective. The process was confusing at first but after the fact the process made sense. There were also options to change/cancel/refund.

With only 7 months of potential QF changes to go today’s version is actually better than the original.

Hi
Be careful If you cancel a flight after they have cancelled a booking they will lock away your payment and you will have to wait 8 weeks to get access (Mine took 16 weeks), in the form of a voucher.
Qantas doubled my fares, on all flights, when I re-booked the flight they cancelled.
When you accept the change you will have to re-book all flights not just the cancelled one, and all prices could double.
Click refund you will wait for a voucher, no cash.
Qantas, on their present downward spiral could be history in 7 months.
Regards

Another thought. In my case they cancelled the flight about 3-4 weeks before departure date. They effectively cancelled all early bookings, and then re-booked them at full fare (double). You are likely to have problems 4-6 weeks before flight. International flights you have options. Don’t re-book with Qantas.
Pat