Price not identified as being in US dollars

I received an email yesterday to subscribe to two years of map updates for my 2019 Subaru Forester. The quoted price was $ 214. (?)

I duly took out the subscription and it was only when an emailed receipt was received that I noted that the price was in US dollars. The actual cost to me was $320.08

I am reasonably certain that the website did not state that the price was in US dollars but I am unable to retrieve this information to verify this.

The email that generated my purchase follows:

Please refer the user manual for instructions for downloading and installing the map update into your vehicle.

This is interesting. The website is run by Harman International and not Subaru. It also doesn’t appear to be a scam website. It appears it has been set up solely to sell maps to Subaru owners.

Assuming you received the maps, a credit card chargeback won’t work as it will be seen as a change of mind - that being that you are now not happy with the purchase as it is more than you realised (that being in USDs and not AUDs at checkout).

The website is a US based website which may not be evident when first clicking on the website. It would be interesting what the checkout page looked like and if the purchase currency was shown. This would be interest sake only as even it it didn’t show USDs, one couldn’t assume that it is in AUDs being a US website and also a website not affiliated with Subaru Australia.

You might have to put it down to bad luck as you are likely to hit roadblocks trying to take it further.

Something you could do is raise it with Subaru Australia that their website should make it clear that the prices on the Harman International website they link to is in USDs. This would make it clearer to other Subaru owners hoping to update the maps that any prices shown are in USDs before clicking on the link.

There are many websites which only show local currencies where the business is located. This includes Australian and foreign business websites and can easily catch one out if not careful.

the price was in US dollars

Yes, this is an annoying problem, by no means limited to “Harman International”.

I would contact Harman International, expressing your concerns, not specifically seeking a refund. See whether they at least are willing to fix their web site for the benefit of future customers.

If you want to back out of the transaction, I don’t see that you can lose by requesting a credit card chargeback - on the grounds that the charge was not made at the agreed price. The worst that can happen is the CC provider tells you to get lost (which, with your spiffing new maps, you won’t be able to do).

It would of course help to be surer of your facts by revisiting the needed web sites and capturing screenshots.

Even if it showed local currency for where it thinks the customer is located … that doesn’t fully solve the problem if the price is just shown in dollars.

The full solution is maybe a web site design “ban” on showing “$” and require explicitly “US$”, “A$”, “C$”, “NZ$”, … as appropriate, at least in any context where confusion is possible (e.g. don’t need Woolworths to fix their web site).

Or we could officially change over to the Pacific Peso.

That is troublesome though because Subaru don’t control that (Harman Int.) web site and if, for example, Harman International were responsive to feedback, the then out-of-date comment on the Subaru web site would be counterproductive!

I don’t think it takes much thought to assume that if you go to a US site that quotes dollars for a purchase that that means US dollars. There will be a conversion to AU dollars when payment is done.

It is more obvious when one goes to a UK site because they quote pounds.

This is the website you are taken to via the email link. 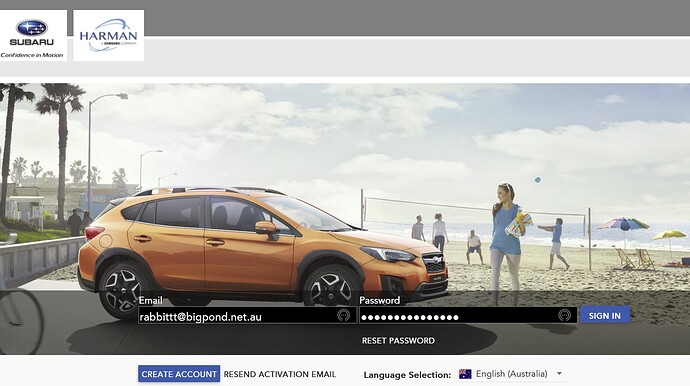 Note the English (Australia) notation. Before I completed the order there was a “Renew subscription” tab. This has since disappeared so I cannot confirm that USD advice was / was not present. I do remember the Australian flag. Also I logged in with my Subaru credentials. I have expressed my displeasure to Subaru and await their response.

The English (Australia) is picked up from your device settings. Doesn’t mean that the currency will be customized to your location.
In fact you could be anywhere in the world with your computer and it would still come up with the same language selection. Unless you change it.

That’s not a well defined term though. There are many aspects to nationality on the web.

… and none of that really tells you what currency applied to the contract.

On the second bullet point, the screenshot says that Harman is “a Samsung company”, so perhaps the answer for that is “South Korea”.

On the third bullet point, my browser says that the site is hosted in the US (via an add-on that operates for every site that I visit) but that information is most definitely not always up to date.

The “Contact info” on that web site is completely unhelpful in revealing the country of the company involved.

but many people will not read the pages of legalese in the privacy policy and in any case that is not completely definitive about the company with whom you are entering into a contract.

The English (Australia) is picked up from your device settings.

Yes, probably, or browser settings. For me that web site offered “English (US)” by default but my device is definitely set to “English (AU)” so I am guessing it is a browser setting (and maybe one of my browser privacy choices is confusing the web site).

… and on the Contact info page, for Australia, it directs you to feedback@subaru.com.au

PS Here’s one thing the ACCC has to say about this: Airbnb allegedly misled Australians about accommodation prices | ACCC

I had a similar experience when I renewed the McAffee antivirus software licence on my new laptop. There was no indication that the price was in US$ until after the payment went through and appeared on my credit card. Also the expiration date for the licence was shown in American date format, but this was not obvious either. I saw red on both counts and told McAffee that this was unnacceptable and would they refund my money and cancel my subscription.
They did.
I signed up with Norton Antivirus instead. Their price was clearly quoted in AU$ and the expiration date was also clear and unambiguous.
BB

Thanks for the feedback BB. I’m still waiting for a response from Subaru Australia.

In response to earlier posts, the site to which I was directed by the email I received had my details, my vehicles name (“Sue”) and the vehicles VIN number. So NO, I didn’t recognize that I was dealing with a non Subaru American site.

There are many websites which only show local currencies where the business is located. This includes Australian and foreign business websites and can easily catch one out if not careful.

I had a similar encounter with the carlinkit Australia car adapter website. This Australian website just stated the $ symbol and only on my bank statement I found that it was US$. The $89 purchase cost me an additional A$ 62 incl foreign exchange fees. After quite a few emails back and worth I finally got the extra cost reimbursed and am therefore happy with my purchase.

Yes, it should be mandatory to state the exact currency US$, AU$, NZ$ etc on every website.

The issue of currency has previously popped up on the forum. Lots of international sites let one pick their preferred currency. The worst, rather than not making $usd clear are some that always take one back to your home country currency even if you want to pay in usd, euros or GBP.

As for seeing Australian engish as the display mode it could reasonably called misleading if ‘$’ was anything but $aud but it is not a guarantee. Every website does its own thing so users need to be wary. ISO standard for displaying currency to a global audience?

Just noted that my bank charged a $9.60 international transaction fee on my purchase.

While the search engine may suggest it is an Australian website… 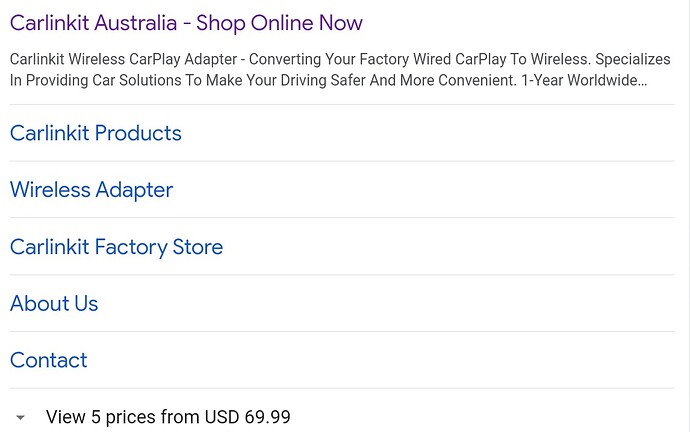 The company is located…

This is another deception which can easily catch consumers. Businesses who set to search metadata to make it look like they are Australian, use Australian references on their websites or have au somewhere in their URL. None of these guarantee the website is an Australian business.

Hi rabbitt, your bank’s A$9.60 fee for a foreign transaction is outright extortion, and the fact that you were misled into thinking you were paying in A$ added salt to your financial wounds. Frankly, a percentage-based fee is profiteering in anyone’s book as I believe the actual transaction cost to the banks is a flat rate regardless of amount. The good news is that there are some banks (not the Big Four) which do not charge percentage-based fees for overseas transactions, and moreover charge you the mid-rate for a currency conversion, so perhaps do a search and find them? Might be worth your changing banks!

ISO standard for displaying currency to a global audience?

I specifically opted not to suggest that because, while it works fine for IT people who have probably had to implement that at some stage or who have at least encountered it, or maybe people who have traveled widely enough and exchanged enough currencies to have seen those codes in use, that might be too obscure for the masses - particularly in a scenario where nothing about the scenario suggests “overseas” or “international” or “foreign currency” or “foreign company”.

If someone in the OP’s situation saw AUD, the person might think … but I have a Subaru, not an Audi. Oh well, the maps will probably work anyway.

But, OK, with adequate consumer education, ISO standard currency codes could work. I don’t think it’s the right answer though.

a percentage-based fee is profiteering

That isn’t necessarily true. The risk to the institutions involved from adverse currency movements is proportional to the amount, the cost of insuring (hedging) that risk is proportional to the amount, as is the risk of credit card fraud (to some extent). For the actual mechanics of doing the transaction, I dare say that you are right - unless there are rules in place that all amounts over a threshold amount require additional checks.

I think that “everyone” agrees though that when you are told an amount that absolutely is in Australian dollars but the transaction is then done overseas / in a foreign currency, which causes you to incur a foreign transaction fee … that is a scam e.g. spotify. That does NOT apply to the OP - because if the web site had not been dodgy then it would have told the OP that the amount is in US dollars and the OP could then reasonably expect to pay an overseas transaction fee.

There is every likelihood though that if the dodgy web site gets changed to quote an amount in Australian dollars then it too will fall foul of the previous paragraph. In other words, it could move from one dodginess to another dodginess.

I think both of these areas need looking at by the Australian authorities.

I had meant presentation rather than codes. ie it has to be displayed with notes about taxes, possible card currency rorts, and so on.Of course the US would push the $USD default and ISO might rollover