It appears that the PowerPro scammer are hitting social media and advertising platforms with this scam device. This is a scam review to try and make it look a legitimate product: PowerPro Energy [Electricity] Saver Reviews – Is It A Scam Or A Legit? Find...

PowerPRO Reviews: Is your electricity bill ridiculously expensive? If you often find yourself wondering how your monthly electric bill is so expensive even though you haven’t consumed massive amounts of electricity or if you want to consume less...

and a news article from the UK

Some elderly householders are being targeted by crooks offering to sell them bogus "energy saving" devices that are dangerous.

These devices have been around for many years and don’t work.

Scammers are also getting cleverer as they are now also posting reviews on platforms like Youtube (like this) and their own review websites to make the products look legitimate when one does a search to see if they work. Once these sham reviews and advertisements are removed, they quickly pop up again.

Don’t fall for this as you will lose your money.

Thanks for the warning. Hope you reported the YourTube. (For additional/supporting info you can put in the BBC News link.)

Hope you reported the YourTube. (For additional/supporting info you can put in the BBC News link.)

Has been done, but Youtube seems to be unable to stop it being reloaded as soon as it is removed. It would be good if they had a video scanner which could automatically detect past videos which had been removed and then have them deleted. This would annoy the scammers as they would have to create a new unique video each time they wish to upload rather than just reloading the same thing over and over again.

I just spotted an ad for this “incredible electricity saving device”. 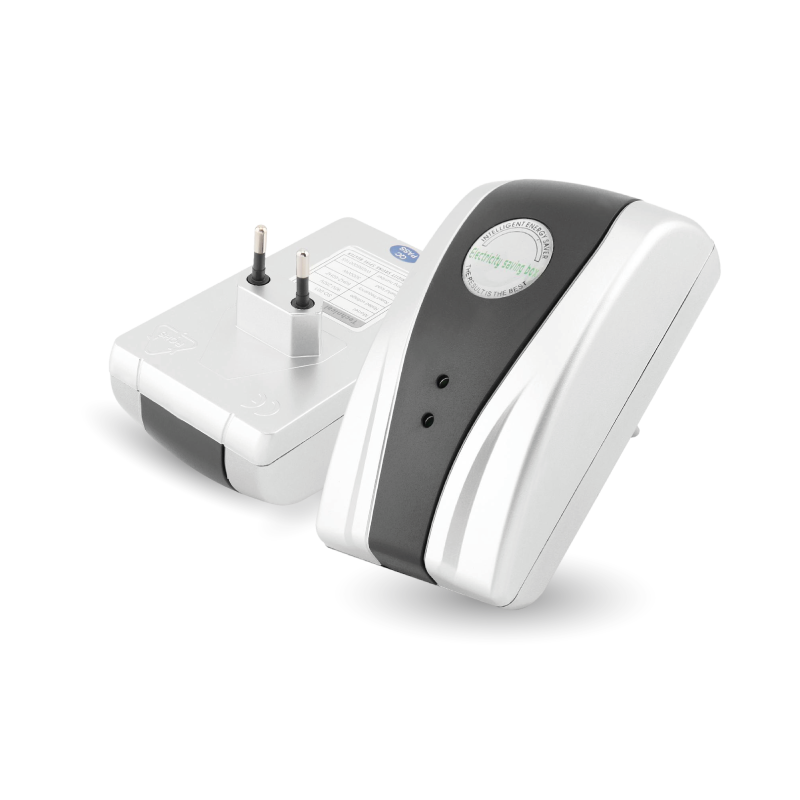 The electric power controller that will help you save money.

I also found these article regarding such nonsense. Over the years, I've seen plenty of power-saving scams. They often claim to save vast amounts off your electricity bills. The problem is, they all rely on a grain of truth in their marketing spiel. So these devices...

I loved this part.

" It’s called Watt Pro Saver and its tech was originally created by no other than the legendary Serbian-American inventor, electrical engineer, mechanical engineer, and futurist, Nikola Tesla. Initially it was concealed from the general public because it offered average families the opportunity to save on their monthly energy costs."

It appears that snake oil is just as versatile as plastic but even more dangerous.

It looks remarkably similar to the PowerPro. It is possible that the name has been changed to try to be in front on online reviews about this sham product. As they say ‘the tiger cannot change its stripes’.

It looks remarkably similar to the PowerPro

Only that the webpage you linked to has no fewer than 4 Bitcoin Scam ads on it.

I have not found any for days.

It is amazing how these scam ads automatically update to the current date.

PS. When I reopened it, there were only 2 Bitcoin Scam ads and 2 “Smart Watch” scam ads.

It appears that these grubs have hacked the http://www.ipsnews.net/ website by adding "business: to it which results in the scam ads appearing.

They are still out there along with the great digital watch deals! 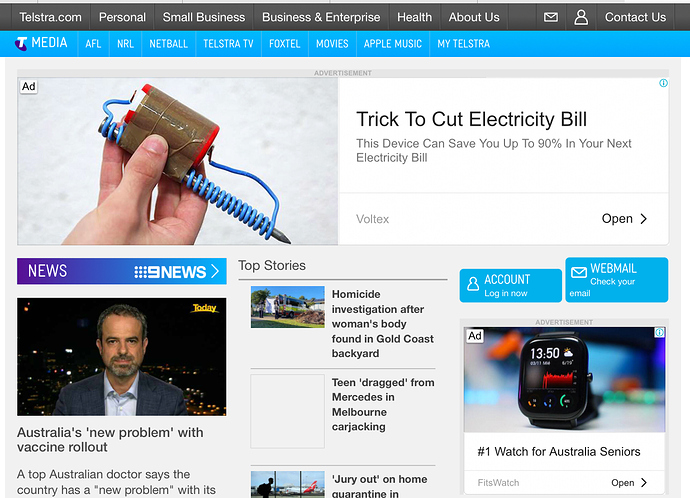 Cheaper than a colander and tin foil?

I’m now wondering whether the links provide to a users account or webmail are legitimate. Oh Telstra, you’ve done it again!

This advert has been appearing in a number of locations, including on social media and also some news websites. I recall seeing it on Fairfax and Yahoo News. Click and it is exactly the same scam as above, just under a new name Voltex. Same tiger, different stripes.

I see these adverts often on the sites I visit that have google ads etc. I think we have been earmarked as “gullible, elderly” and fed a constant diet of things “taking Australia by storm” or “every Senior must have” or “Police advise Seniors to use this device” along with “(insert celebrity eg Dick Smith or Pollie + photo) urges - buy Bitcoin / scam investment / etc”

We are on satellite NBN so our “location” varies from WA to Western Sydney to Rural Vic - with location specific adverts for Aged Care, State Elections etc. None of any relevance to us. Sick of them. They are wasting their time and bandwidth on us!

They are wasting their time and bandwidth on us!

It’s our bandwidth that is being wasted!

More an issue for a minority?
Is there a solution. Ad/pop up blockers stop items (but not all) loading in the browser window. Is the solution to stop them at the other end by filtering them out at a remote server?

Of course that would break one of the fundamental rules of the internet.

In the example I took a screen shot of, I’m assuming the issue is partly down to ‘Hoo-gle’ which has captured the address bar of Safari. Even when you type in the exact web address it still routes through Google! We remain the product.

It’s our bandwidth that is being wasted!

Perhaps I should get one of those “trick to cut electricity bills” battery taped to a nail and wrap my WiFi cable around it - and save 90% on my internet!

I am surprised some scammer hasn’t thought of that one …

Online ads have been popping up on Australian screens spruiking a magic product that promises to slash electricity bills by “up to 90%”. It’s a scam.

For starters, the party or parties behind the campaigns haven’t even used an accurate image in the ads. What is shown (displayed above) definitely won’t work as it’s a basic electromagnet. After seeing the ad eleventy-bazillion times in the last couple of weeks, I clicked to see what they were actually peddling.

The “real” device is one of the many versions of so-called power savers that are heavily promoted from time to time. They keep popping up as people keep buying them. These devices aren’t cheap given what they are – in this case costing around $75 a throw, and throwing it is what you’ll end up doing with one. It could be the worst $75 you’ve ever spent as there have been some instances of these sorts of devices overheating and catching fire.

The “power savers” have been marketed under a bunch of names. Unfortunately in this incarnation being thrust in front of Australian eyeballs, the device has been given the same name as a legitimate electrical supplies company in Australia. That poor company, which has absolutely nothing to do with the scam, has been copping a virtual earful in online reviews.

Assuming it’s like other devices of this nature, it’s just a plug containing an LED, small circuit board and capacitor; basically an ineffective power factor correction capacitor. This doesn’t reduce the real

That poor company, which has absolutely nothing to do with the scam, has been copping a virtual earful in online reviews.

Does it have a name?

Hi @cliveed_15, I have moved your post to a similar thread about the same sham products.

Yes it is and it has a reincarnation every few months as information becomes widely available that a particular product name is a sham product.

Does it have a name?

@cliveed_15, I agree with @syncretic, if you know of the current brand/name of the sham product please include it in the thread so that it will appear in internet searches of anyone looking for information on the product. It might save others losing their hard earned cash on these sham products.

They are currently using the name Voltbox.

The ACCC took action against the suppliers of a similar product in 2013.

Auscha Corporation Pty Ltd and its former marketing manager Nagarajah Rajkumar made misleading claims about the power-saving ability of its Enersonic Power Saver device, the Federal Court has found. In 2008 and 2009, Auscha marketed and sold the...

If the supplier of this latest device is outside of Australia it is more difficult an action. Whether any action should be taken or is possible against the websites which permit delivery of the content? It would be a great outcome, although they might claim to have no control.

Welcome to the power of Google and others to not care.

The ACCC took action against the suppliers of a similar product in 2013.

Wow. What a massive “fine”.

"Furthermore, the court issued injunctions restraining Auscha and Mr Rajkumar from engaging in similar conduct in the future and made orders that Auscha:

Enough to deter any future offenders, or at least make the cat laugh.

Claimed to reduce electricity usage. Has anyone had experience with this device?

experience with this device

Welcome to Choice Community. Which one did you have in mind? Do you have a link for it?

Hi @erzebet10, welcome to the community.

Do you have a link to the specific product?

There are many plug in devices which claim to save power use - and are sham products. Products are renamed/reincarnated when they are exposed as being shams.

I have moved your post to an existing thread about power saving sham products. It is worth reading the above thread.

In relation to sham products, a consumer will save money by not spending money on sham devices, but using the money against their next power bill.