I wonder if it is time for Choice to examine the consumer benefits of nuclear power electricity generation?

Solar thermal collection and storage is safer and cheaper when you include the cost of storage of nuclear waste and of decommissioning a power station a large part of which is radio active.

Thanks for starting this discussion @john.fletcher. I’ve moved it here as I thought it may be an interesting discussion for the CHOICE Community.

CHOICE is currently embarking on a range of energy-related projects, especially related to retail power providers. We’re interested to hear what people’s views are on this subject.

I certainly can’t think of any benefits, considering it costs a lot more to produce than wind or solar power, is very inflexible in output, ie unable to meet rapid fluctuations in demand, the inherent dangers of operating a nuclear power plant and transporting radioactive materials around the country, plus the radioactive legacy it leaves behind, for a very, very long time. There is still no really secure long term storage for highly radioactive waste. The US spent $billions developing a store, before abandoning the project.

Many countries are scaling down the use of nuclear power, some with the goal of eliminating it entirely, due to costs and risks. Constructing a nuclear power station is a long term- years to decades project, so has no place in solving any real or imagined energy crisis in the short term.

Nuclear power, or ‘nukular’, as many seem to call it, including one ex-president of the USA, just isn’t needed in Australia.

If we don’t need it, why has Australia just joined the Gen IV team?

As it says in the article:
“However, ANSTO stated this was not about advancing the cause of nuclear energy in Australia’s current energy mix; instead, it was about utilising Australian skills in research and development.”

It’s frustrating when the media write headlines like this one … “Australia joins” … perhaps “ANSTO joins” would be more appropriate now I read the article - I don’t appreciate the implied inclusiveness or complicity. ANSTO of course does some amazing things, but it’s just ANSTO that has joined … I feel better now I know I don’t have to attend …

The Lucas Heights reactor in Sydney is set to ramp up its production of nuclear medicine.

Some are keen to sell radioactive materials to other countries, but that is a different discussion.

I reckon it’s time to admit that nuclear power generation is dead. Here’s an old post by a Canadian, who’s actually not anti-nuclear. He just recognises the futility of flogging a dead horse. His analysis applies as well to Australia as any other nation. The only reason for Australia to build a power reactor would be scientific curiosity. We have better uses for scarce research funding.

If Choice is to get involved, it would be best to concentrate on the lowest-cost, most reliable options for the long term. That isn’t nuclear.

Renewables are variable, which adds a layer of complexity, but that isn’t really much of a problem. In August, the ANU took a look around and found 5,000 potential sites for pumped hydro energy storage. At the time, they said that was 35 times what we’d need for a 100% renewables energy supply. They kept looking and in September announced that they’d found a total of 22,000 sites. Then, of course, there are batteries. Batteries provide faster peaking response than the gas-fired generators that failed South Australia last summer.

The more geographically spread a renewables-based grid is, the less variation there is in its overall output. With present-day technologies, transmission loses about 3% per thousand kilometres. Storage technologies are typically about 80% efficient. We could transmit power across the nation with better efficiency than storage.

If Choice is to get involved in the electricity supply, then that’s where it should be looking. A nation-wide renewables-based grid.

This could be used an advantage as excess electricity at periods of low denand could be diverted to make hydrogen…from water. It is possible hydrogen will be needed for long distance vehicles in the future…such as trucks, buses or cars.

Looking at the big picture. Australia generates some 250 terawatt hours of electricity per annum 80% of which comes from fossil fuel.

Is it realistic to expect renewables to replace this?

e.g. 200 TWh would require almost 400,000 hectares of solar cells, almost the size of Kangaroo Island! Then you would need some room for the batteries…

“Reality is that which, when you stop believing in it, doesn’t go away.”
― Philip K. Dick, I Hope I Shall Arrive Soon

Can ANYONE guarantee there won’t be another Chernobyl?

almost the size of Kangaroo Island

Allowing your data to be tabled without checking, and focusing on solar alone with its current technologies, that is not necessarily unreasonable considering our empty sun drenched land mass. The proliferation of small residence sized arrays is already making a ‘dent’ in the equation. Reality sometimes bites.

[quote=“john.fletcher, post:11, topic:14728”] …250 terawatt hours of electricity per annum… Is it realistic to expect renewables to replace this?
[/quote]

SA is already running at around 50% renewable energy, and there is an awful lot of empty desert area in Australia that could take PV arrays, plus businesses are starting to realise that self-generated renewables are less expensive than grid power. Whyalla’s steelworks will be up and running on renewable energy soon too. (Whyalla didn’t turn into a ghost town because of the Carbon tax, as some clown pollie said it would)

Wind farms take up less space than PV arrays, run at a higher capacity factor in favourable areas (lots of them in southern regions) and the land can still be used for cropping or other farming and grazing activities. Whyalla’s not a ghost town, it’s the centre of a green industrial revolution

Garnaut says renewables will cut energy costs to Whyalla steelworks by at least a third, and outlines plans for large scale solar, rooftop solar and pumped hydro and battery storage. Sydney and Melbourne steel plants to be renewable powered too!

Gupta says bigger steel plants in Sydney and Melbourne will go 100% renewable, and there is no reason why an aluminium smelter could not follow.

Personally their are other better alternatives

From a consumer point of view we should consider the cost…

I am trying to find out the cost (LCOE) of PV with storage. (baseload) 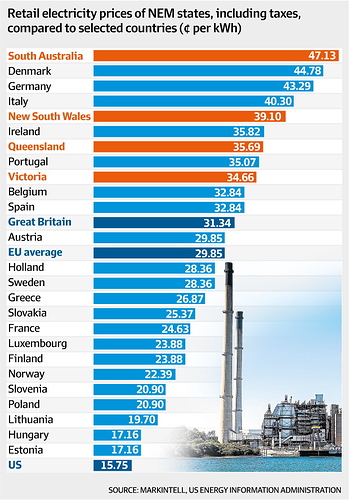 None can guarantee anything. I couldn’t even guarantee that the world could be hit by a asteroid in the coming years either.

But one thing is for certain, Chernobyl was a early generation Soviet plant. Today’s plants such as pebble beds and other reactor types such as LMFBR, are a lower risk than the early generation reactors. There is no such thing as zero risk in any form of electricity generation.

It is also worth noting that coal fired generators also emit radioactive isotopes through their stacks.

I am trying to find out the cost (LCOE) of PV with storage. (baseload)

This one has some figures for the UK which would be transferable to the Australian market - See Table 3.1. Note: the report is 2012 and the costs of some storages such as Li-on have come down.

There is a good reason SA has such high prices, and it is nothing to do with solar and wind power- it is the big gas generators ripping money out of people by gaming the system.
Average South Australia wholesale prices in the first four months of 2017/18 were actually lower than the coal-dependent states of Victoria and NSW (I don’t have any more up-to-date numbers handy), and that is likely to continue as more wind, solar and storage is developed.

There’s a cool video about the end of coal for SA here:

I’m not sure how old those LCOE numbers are, but electricity from new coal generators, especially with the laughable “low emissions” tag, is going to cost a lot more than $80-90. Even old coal wholesale prices are often running above that now, typically around $100/MWh.

Also, I think you’ll find those LCOE numbers for solar and wind are woefully out of date, contracts are around $60/MWh or less for wind in Australia, right now. Solar isn’t much more.

One developer, Reach Solar, says solar and storage is already cheaper than gas and will be “well below” $100/MWh – the current level of wholesale prices – within a few years.

It is not really possible to say what nuclear power might cost in Australia, as we dont have any nuclear power generators, and they are talking about using Gen 4 reactors, which are rather thin on the ground… last I read only a handful in existence, and only a couple have actually produced power for a grid. Nuclear power is certainly not cheap, and along with all the risks, end-of-life clean-up cost (no doubt to be paid by the taxpayer), it really is a non-starter when renewables are so abundant and inexpensive, and becoming even less expensive over time.

The graphs presented in this article give an indication of where prices are headed, although it is for the US Latest analysis from Lazard points to continuing falls in cost of wind and solar, and a growing divide between renewables and fossil fuels. And the cost of storage is falling too.

Of note is that utility scale solar contracts are being written for $US21/MWh now in Chile.

Thanks for that. I just found another publication from AEMO. It is very thorough and recent.

The LCOE $/MWh figures for PV have come down and coal with CCS has gone up. Gas turbine with CCS is now the cheapest baseload option.