Having finally resolved all issues with our office PC which commenced on Tuesday last week, I am posting details so as to forewarn others.

I had a Windows problem from hell this week. It suddenly started with Chrome reverting to previous pages viewed and even back to the Chrome homepage. Returning to the desired page would only last a short time before it happened again. Most annoying when trying to look at the Choice Community and the ABC News. I tried all the suggestions I could find online to no avail but the problem continued until the PC would totally freeze. I started using the backup drive until it wanted to install a co…

When I restarted the PC the next morning, both SSD drives would freeze once again. I removed both of them and swapped them in turn with the SSD drive in our Sony laptop and they both worked fine.and I then put the laptop drive in the PC and it had the same freezing problem, so it definitely is not a drive problem. I have checked the RAM and swapped the power supply with the spare I have to no avail, and tomorrow i will remove and reinstall the CPU in case there is a bad contact with one of th…

Believe it or not, the main problems were caused by a faulty Microsoft wireless mouse, and as I did not have a spare working keyboard or mouse, I was unable to try substituting them.

There was also a smaller problem with the 2 x AA batteries in the keyboard being down to around 1.46 volts.

I had already replaced the mainboard, the CPU and the RAM with a new Gigabyte mainboard, an Intel 6 core i5 CPU and 16 GB DDR4 RAM.

Replacing the mainboard caused Windows 10 to have a dummy spit as expected and I could not find the product key as it had upgraded itself from the original OEM copy of Windows 8.1 I bought when I built the PC in 2014 and I no longer had the product key.

I tried contacting the muppets at Microsoft a few times only to receive a message that they would call back in 1 minute, which they did, but each time the call dropped out.

I gave up in disgust and bought a Windows 10 Home licence from an Australian software vendor but I could not simply change the product key as indicated by Microsoft, so I contacted the vendor who supplied a link to the correct procedure which worked a treat.

If I had been aware that Windows needed to be reinstalled instead of simply entering the product key, I would have bought Windows 10 Professional for the same price as Windows 10 Home.

I followed their instructions but only Word operated with the other programs all displaying this error message. 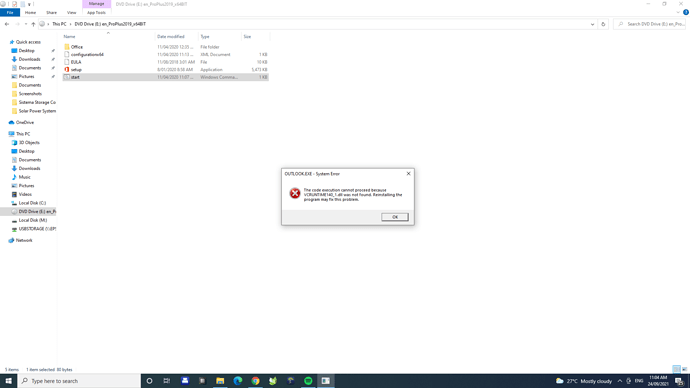 I deleted the download and deinstalled Office and repeated the installation process again to no avail so I contacted the vendor who promptly provided the solution.

So after more than a week, I finally have the PC working correctly and upgraded despite the problems caused by Microsoft and the total lack of any help by Microsoft.

A faulty mouse. That’s a bit of a letdown. I was more expecting a gecko problem from FNQ.

Replacing the mainboard caused Windows 10 to have a dummy spit

And, the free upgrade paths from 8.1 assuredly depended on it being the same computer, ie the same mainboard.

Just to add insult to injury, I just received these 2 emails from Microsoft “support”. 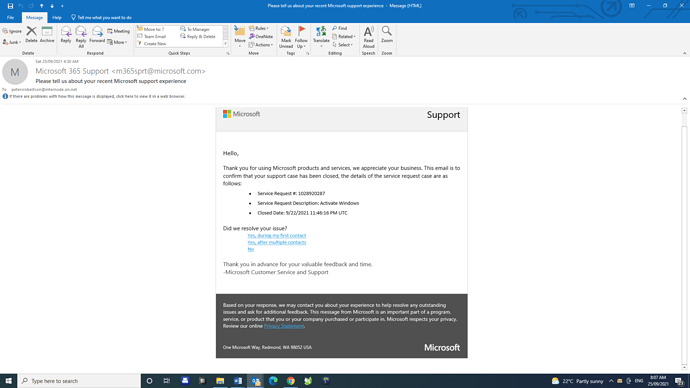 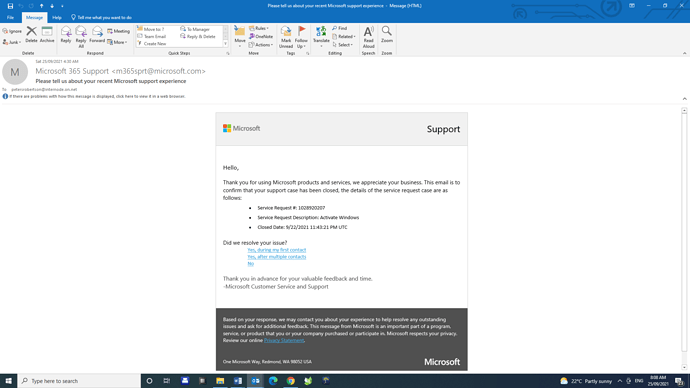 "You lot are a complete joke.

You would not know customer service if it jumped up and bit you on the arse.

You clowns cost me almost a week of my time and almost $1,000 because of your crap products."

You clowns cost me almost a week of my time and almost $1,000 because of your crap products."

That seems a very expensive mouse.

$1,000 for a mouse. I’d be angry too! But now your system is all brand new and up with the latest, is another thought.

Perhaps this would have been better value and less stressful. $139 for a 12 month pass. No clowns.

https://www.australiazoo.com.au/visit-us/annual-pass/
I’m not at liberty to say what happens to any misbehaving or errant mouse.

I’m not at liberty to say what happens to any misbehaving or errant mouse.

This one is going to get a tune up with the block splitter.

It may not make it work but it will definitely make me feel better.

Typically you can change the licence over

Would that be a retail license, or also an OEM license? I suspect only the former? 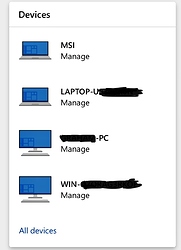 If the OEM licence is the built in OEM activation found on preinstalled laptops no it doesn’t work if not linked to a MS account, but often nowadays they each get a individual key and if you link the PC to a MS account it will store the key which can be transferred.

An educational morning, thanks

How to Transfer your Windows 10 License to a New Computer

Depending on the type of Windows 10 license you have installed, you might be able to transfer it to a new computer, if needed. Here's how to do it.

I bet they have mice available but do they have grubs? If you need to yell at something grubs are better as they don’t run away.

Once upon a time, you could simply call Microsoft and speak with someone in India, explain the problem such as a mainboard replacement, and they would provide a 25 digit alpha nnumeric code like a product key which would reactivate Windows.

Once upon a time, the licence would be stored under System in the Control Panel as a 25 digit numeric code which you could use a free program to convert to the 25 digit alpha numeric product key…

I just looked at System and there is neither the product key or the 25 digit numeric code shown but interesting it is showing that I have Windows 10 Pro, not Home.

Belarc Advisor does show the product key now but it did not after I changed the mainboard the other day.as Windows had obviously destroyed it, and even reinstalling the original mainboard would not get it to display.

To be fair to Microsoft, they put an enormous effort into testing their operating system and presentation manager, both called Windows. On almost any computer system you could think of.

From a systems programmer perspective, as I am, programs running using the Windows presentation manager operate in an event driven manner. They sit and wait for some IO event to occur. This is typically from a keyboard or a mouse, asynchronous, or from a system call for file access or network access, synchronous.

If an application started behaving strangely like backing up screens I would go straight to suspecting IO events from the keyboard or mouse. If faulty events from a dodgy mouse or keyboard were so frequent, they could overwhealm the OS event queue and affect the overall computer performance, or just crash the foreground program.

Worth having a spare USB mouse and keyboard in the diagnostic toolbag for future.

Save the belarc advisor as a pdf before or after every internal change and viola a record of Numbers.

To be fair to Microsoft

That’s unusual. “Fair” and "Microsoft in the same sentence. I thought that they were mutually exclusive.

Fortunately, the person I bought the programs from is a software developer who very promptly sorted it out in stark contrast to Microsoft’s puerile advice to try reinstalling it.

As for Office 2019, what sort of clowns would sell a product and fail to advise it will not operate without also installing another update.

what sort of clowns would sell a product and fail to advise it will not operate without also installing another update.

Sony, when they were a Laptop business?

More challenging with Sony + Microsoft when the auto upgrade to Win 8.0 kicked in. Despite the laptop requiring a bios/driver update prior. The Sony bios update and driver could not be installed once Windows was upgraded. Basically start again from the original factory install. Days of pain given the 2Mbps ADSL service.

Those were the days @Fred123 when ….
These days most of us expect the technology to just work. It does mostly. The temptation when it becomes essential will be a single portable device plus mobile. Which ever device works with the least pain with an external screen and keyboard.

I gave up on Microsoft some years ago. They offered “early up-takers” a free deal on the introduction of Windows 10 - I installed it - it didn’t work properly - they looked at it & agreed - I had them on an annual support contract, so they couldn’t dodge the bullets - or couldn’t they?
They told me the only solution was to uninstall Windows 10 and reinstall Windows 7. Which I did - with their guidance.
Then everything started going barmy. Shortly after that I couldn’t access some of the basic functions. It got worse. I range support. They THEN told me it would continue to decay until the computer stopped altogether. And that the only thing I could do to remedy the problem - one that THEY had created! - was to look on eBay for a second hand copy of Windows 7 that had both Service Pack 1 and Service Pack 2 already in it. Otherwise - they had NO solution to offer.
And the closed the conversation by telling me they were cancelling their contract to provide me with technical support, with immediate effect, and refunding the premium I’d paid them, for that support.
They did - the money was back in my bank account almost at once.
I couldn’t find any such copies of Windows 7 and so I eventually lost everything on the computer - 500 GB of programs and data files.
I don’t do business with companies that behave like that. And anyway, I have no use for a computer software company that behaves like that.
So I will NEVER have anything further to do with Microsoft. The devil will arrive at work on ice skates, before that’s ever going to happen!

I eventually lost everything on the computer - 500 GB of programs and data files.

It seems odd to me that a failed OS would destroy the data on the HDD. It isn’t very difficult to put the HDD in another cabinet with a functioning OS to retrieve what is on it. Obviously this doesn’t make apps work but you should be able to re-install them in a new or rebuilt box and then copy in the data.

Interesting. So if I can understand the situation here, it is:

And then you agreed to be a ‘beta tester’ for Win10 in prerelease, bugs and all.
And you actually paid Microsoft an annual support fee.

This may sound harsh, but your problems were all down to you.