My wife was turned away from a pre-arranged doctors appointment this afternoon at a multi-doctor practice because staff claimed that Medicare would not accept a second consultation on the same day that she had already attended the practice for her COVID vaccination this morning. (even though it was a nurse and a different doctor who did the COVID jab).
This is preposterous. Has anyone else been mucked around like this?

When I see my GP for a consultation and thr=en see the nurse for an injection, there is only the consultation fee charged.

If I only see the nurse, there is a much lower fee charged.

Presumably they had processed the lower nurse fee and could not then charge the GP fee or the difference.

Perhaps some doctors don’t know the difference between hippocratic oath and hypocritic?

I wouldn’t be too hasty with that. While the following does not directly answer the specific question it gives some guidance. http://www.mbsonline.gov.au/internet/mbsonline/publishing.nsf/Content/connectinghealthservices-patients-QA#q21

You should assume that anything to do with government rapidly gets complicated - and there may be special rules in connection with a COVID vaccination.

It is also possible that there is no Medicare restriction but there is some dubious design in the practice’s software, and that does effectively create a restriction.

I think the only way of getting to the bottom of this would be to ring Medicare and ask.

Glass half full … thank you to your wife for being part of the solution - to getting us out of this COVID mess.

Trying to save two trips to the same medical clinic, I recently tried to book online an appointment with my doctor and one for my annual skin-check with another doctor.
The response was that I could not make 2 appointments on the same day at the clinic.

The government is probably trying to get you to combine the two appointments into one.

Earlier this year I had an eye injury and internal bleeding. All good now. I reported to the regional hospital emergency who treated me as an out patient. Once they were done, I was redirected to an outpatient clinic at another hospital that specialised in eye, respiratory and other ailments. The two presentations on the same day were seperate, and covered. Does it depend on …? 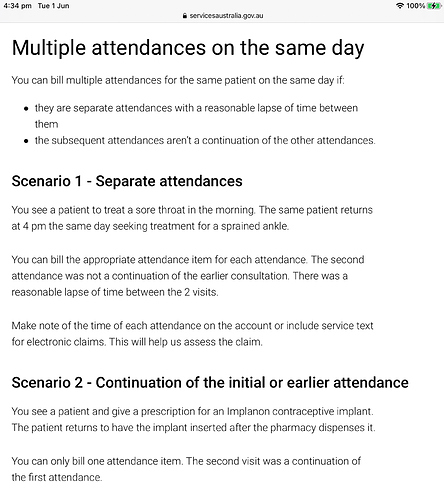 Not perfect, but it’s clear concerning treatment for different purposes. We often try to arrange more than one appointment into the same day trip into town.

I think it is abundantly clear that the government has
a) contemplated the possibility that a patient / doctor can claim for two attendances in the one day with the one doctor, and
b) allowed it under some circumstances.

It would obviously be difficult for an online booking system to judge and enforce the conditions though.

I don’t think we have got to the bottom of this.

Thanks for the various researched replies to my situation.
BTW the refusal to allow the second appointment was verbal by the booking clerk - not by the automated appointment system.

My takeaway is that we will be extra-aware in future, despite the apparent misapplication of the rules in this circumstance.

I have ever since June 2018 I believe. I been unable to claim the medicare rebate if the consultation & treatment is done the same day. However if you elect to have the treatment done on the same day (most people do as travel is frequently impossible) then you can only get the rebate on the consultation,however if you return the following day then you can get the medicare rebate on the treatment . Its a way for the government to keep costs down from their end but makes life very difficult for clinics & surgery’s as it means double bookings for almost every patient. Double travel & costs also if unwell & most patients are it is a very unfair change in Medicare repayments.

I have certainly had no problems with clinics doing two vaccinations in a day, even when I had to get a script for a whooping cough vaccine (as a new grandparent) after my flu and pneumonia jabs. I suppose that it’s up to the clinic and may rely on their good will.

I was bitten/stung/otherwise poisoned on my thumb whilst gardening. My thumb swelled and turned black. I visited the doctor who did not prescribe any treatment. In conversation with a relative later in the day, she asked, “Did the doctor give you a Tetanus injection?”. As he hadn’t, I returned and requested an injection which he gave me. He bulk billed for both visits on the same day and regarding the same ailment and it was covered. This was not a group practice.

Does sound like the original issue was caused by a misinterpretation of regulations.

My trusted local GP’s efficient staff wouldn’t make 2 appointments on the same day. They advised me that the problem is Medicare.
They bulk bill me.
I believe them.

Direct your queries / complaints to Medicare - and post your results here.

It may help all of us to tease this one out of there are any further details concerning the GP or reasons why both could not be done at the same time?

I have done the same.

I do too but the GP only charges for the consulation.

If I see the nurse on a separate day, they charge a fee of aroung half the GP’s fee.

Re “It may help all of us to tease this one out of there are any further details concerning the GP or reasons why both could not be done at the same time?”

In the original case in point, the doctors appointment was a longstanding one, made for 3pm on the day in question. The COVID jab had been separately requested and the surgery offered the choice of two dates, one of which was the same date as the doctor appointment and so naturally that date was chosen for the jab as well. However their vax clinics were only conducted in the mornings and so two separate vists to the surgery on the same day were required. Only when returning for the afternoon appointment was the refusal advised. - pretty poor form on the part of the staff who had made the vax booking, because they were advised at the time that the reason for choosing the particular date was simply because of the existing doctor appointment on that day.
From the various replies here, it would seem that we were unneccessarily inconvenienced due to inexperienced staff misunderstanding the Medicare rules. We are not expecting any redress, but merely raised the issue here to help others be aware of the potential for this to occur.

I am a type 2 diabetic and have three monthly reviews with my GP, with future reviews scheduled at the time of the last review. A review involves an initial consultation with the Diabetes nurse and a “sign-off” “consultation” with the GP. I have a sneaking suspicion that the sign-off consultation is the equivalent of a repeat script presentation fitted in between normal consultations. I am bulk-billed on each occasion.

Before my last review I received a request to have a medical review to determine my suitability to retain a driver’s licence. (Here some would argue that this is / was a normal part of my Diabetes review.)

After 3 days I again rang the GP practice and my understanding was that the need for an extended consultation was needed, and confirmed.

I duly attended the consultation but when I presented the Driver’s licence review form for completion, I was advised that Medicare would not cover this and that I would need to make a separate appointment, unless I paid $75 without any Medicare rebate available. I think same day appointment Medicare limitations was proffered as the reason. (But my recollection after being somewhat taken aback is admittedly hazy).

Because of the proximity of the end date for the driver’s licence review, I agreed to pay the $75.

I greatly appreciate the care and diligence of my GP and this commentary is not to be seen as a complaint against my GP. Rather, the complaint is somewhere between the Morrison Government’s competency and Medicare administration.

He bulk billed for both visits on the same day and regarding the same ailment and it was covered.

This would seem to be exactly what the regulations are trying to stop. However do you know whether the second consult was billed as a new consult or as a continuation of the first? (To know that, you would need to look at the Medicare item numbers, perhaps.)

I don’t have this information to hand to check if these were a continuation or billed as new. Medicare statement history only goes back three years and this incident happened more than three years ago.