May 2022 Food Champions Challenge: What is your favourite Pizza Topping?

Pizza: it looks inviting, it smells great, it tastes fantastic!
Well known, readily available, has all of the basic tastes including Umami to make it the most popular food in the world. It has even been granted the ‘Protection Designation of Origin’ status by the European Union in 2009.

From antiquity many cultures would prepare a flat bread with various toppings, but it’s only when tomatoes were introduced from America that the Pizza we now know starts to appear in Italy, the Neapolitan Pizza with tomato and mozzarella.

The dish was popular among Italian migrants in the USA and was listed on the menu’ of the many Italian eating places, especially in NY, but it was when WWII veterans returned from the Italian campaign that its popularity became widespread.
Tourism in later decades made a further big impact and pizza houses mushroomed around the world. In Melbourne Toto’s restaurant claims to be the first pizza house to open in Australia in 1961.

When we make our pizza at home we can choose the toppings: meat, fish, veggies, cheese, herbs and spices. When we eat out or take-away usually we are limited to the menu’ list: a basic Margherita, Or a hot and spicy Pepperoni, or a tropical Hawaiian….

For a chance to be awarded the Food Champions Badge for your profile, please share with us What is your favourite Pizza Topping?

Big thank you to all participants of the April challenge.
Congrats to: @ScottOKeefe @Flutterby
@killerheel @brudith @Haet
You have been awarded the Food Champions Badge.

If I don’t have time to make a decent base, I use a wrap (eg Helga’s) - sometimes two with mozzarella thinly sandwiched - toppings usually some combination of (hot) pepperoni, bacon, tomato, mushroom, olive, anchovy, capsicum - minimal cheese (sprinkle of parmesan and mozzarella) and loads of cracked pepper …

We make our own pizzas (inc base) from scratch. The most important topping is possibly tomato paste, as a good tomato paste frames the flavour for other toppings.

For a standard pizza topping, we include

An ingredient we love is fresh home grown asparagus.

We also make garlic pizzas occasionally where a knob of butter, splash of oil, salt (if unsalted butter is used) and heaps of crush garlic are mixed, and applied generously to a pizza base. Season with cracked pepper and cook until the base is golden.

If I don’t have time to make a decent base

I really like a yeasty dough for pizza and I am not too keen on substitutes like flatbread. One way around the time problem is when you are making dough is to make extra and freeze balls in freezer bags that are enough for one pizza. Thawing and second rising is much faster than starting from scratch.

While you’re here, would you care to share with us what is your favourite Pizza Topping?

I think that depends on what sort of base?

Even in Italy there is more than one type of pizza base. Pizza siciliana which is thick, fluffy and baked in a rectangular pan is a good example of difference. The style of base associated with Rome is more like a crisp cracker.

Some toppings seem to work better with different bases. As a universal topping, providing it includes anchovies as thin slices or blended into the tomato base, I’m likely to come back for more.

I’m also partial to a four cheeses pizza unimaginatively called a Pizza quarttro formaggi on a thinner base. Just add your favourites although one should be mozzarella. One would always be a grown ups blue cheese (Gorgonzola if a purist). It’s a great way to use up the last of in the fridge. Don’t try this if you are booked for a blood test and cholesterol assessment within the next week.

would you care to share with us what is your favourite Pizza Topping?

I don’t have a favourite but here is an idea that may be useful. We can’t all get access to top quality ingredients all the time so in part you have to make do. I like prawns on my pizza but have to use the peeled uncooked frozen kind. A bag lasts for several pizzas and is not too pricey.

Thaw them in cold water and then dry them before putting them on. If the flavour is a bit bland try a little marinade. A squeeze of lemon juice, pinch of salt, chopped garlic clove and a little EVOO will do good things, make just enough to coat the prawns. Let them sit marinating while you cut up the rest of the ingredients, roll out the dough etc.

Here is another idea that isn’t exactly about ingredient selection - but quite relevant. When putting the topping on layer the ingredients according to cooking time and water content. Say you like sun-dried tomatoes but they tend to burn. The reason they burn is they hold very little water and dry out quickly. Put them on the bottom so they are not exposed, similarly prosciutto. Capsicum and mushrooms have more water so they can go on top. Ingredients that need to be cooked through, like chicken, may need to be pre-cooked.

Can I now be forgiven for mentioning dough?

Pizza Margherita: well known and much loved pizza topping. There’s a charming ‘story’ about it, they say it was born in 1889 during the visit in Naples of King Umberto I
and Queen Margherita. A chef made a pizza with Tomato (red) Mozzarella (white) and Basil (green) topping, the colours of the flag of the newly united Italy, and named it Margherita in honour of the Queen. They say she loved it, a welcome change for her from French cuisine.

Many say that such pizza topping was already known and loved. Maybe giving it the name of a Queen was a marketing strategy? Fact is it’s a very popular topping, light and tasty, without some of the ingredients that some dislike such as anchovies and mushrooms

What we call ‘Sicilian pizza’ is midway between a focaccia and a pizza. It is called ‘Sfincione’ which can be translated Thick Sponge.
Started as an ancient way that poorer people would dress a soft, thick bread with tomatoes to make it appear festive.

It’s a very popular street food in Sicily, similar but not quite a traditional pizza. But then one would go crazy trying to follow the different ways Italian regions cook and the names they give to their food

Sfincione has a square shape, plenty of olive oil is used, and a lot of anchovies and a tomato sauce with onions and thyme,
then a cheese topping, and

lightly toasted breadcrumbs are sprinkled all over it.

Can I now be forgiven for mentioning dough?

Same might be said of what some pizza chains offer up in Australia. Neither the bases (cheese loaded thicker crusts) nor toppings escape updating.

Would anyone suggest mashed potato, beetroot, curried lentils or spaghetti or …?
Ham and pineapple are a winning combination, with a tomato sauce base, button mushrooms and spinach! One source says of Canadian origin, hence we can blame their French culinary traditions if it’s not a topping that appeals.

That nails it for me. I like my pizzas to be thin and simple. I certainly don’t like pizzas that are overloaded with every topping under the sun.

As a finishing touch, I love a few drops of green Tabasco.

Yep, tomato base is a must, and cheese, but the one topping that is required in our household is jalepeno, and I just go with the pickled variety. I moved to Australia more than 40 years ago from Texas, and there jalepeno was on everything from breakfast till lights out. Kept us mobile…

Shredded ham. And lots of it.

Not the awfull ham bits that you find in packets in supermarkets, but long thin strips lovingly crafted by skilled pizza makers in Australia for such classics as the capricciosa, the tropical, and the good old aussie with bacon and egg.

I make my own shredded ham using good ham slices from the deli, and a bit of time and effort.
On top of that, whatever. Pepperoni, onion, green capsicum, sliced mushrooms, olives, sun dried tomato, and if I feel like it, a small amount of pineapple, or some little shrimps.

There is no place on any pizza I have for anchovies or chicken. The former I think should be banned as a crime against humanity.

Thawing in salty water works well to develop the prawn taste, not too salty to overwhelm but enough to make it a little less salty than sea water.

There is no place on any pizza I have for anchovies

I’ll note your preferences as non-conforming.

IE. Not of traditional middle class 16th century Italian origin.
For those inspired the quality of the anchovy matters. There are toppings that go best with anchovies, and those that do not. 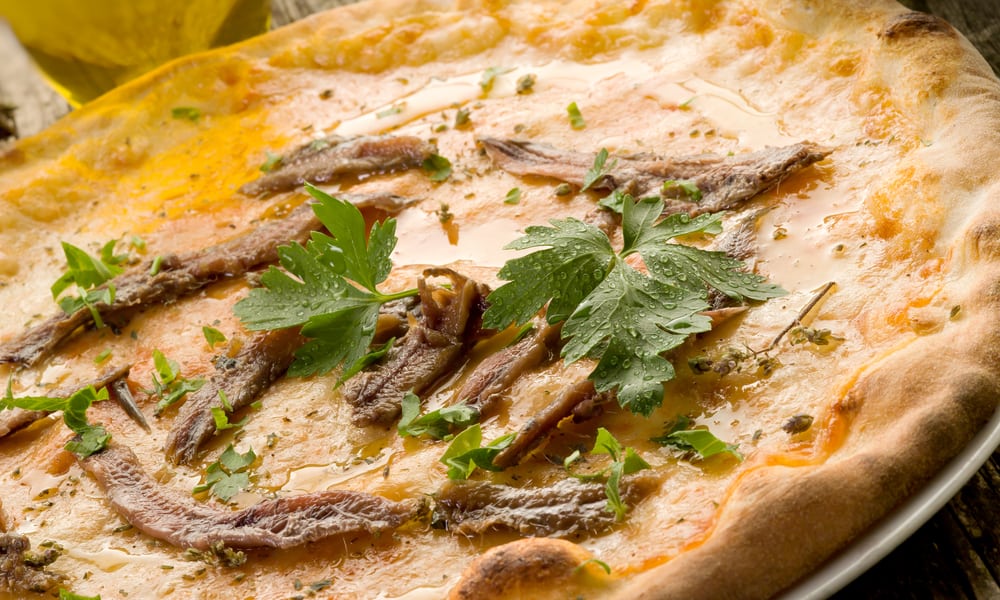 Are Anchovies on Pizza Good?

Pizzerias are increasingly becoming innovative with their choices of toppings these days. Whether you go to Domino's, Pizza Hut, or Papa John's, you'll find the anchovies replacing the humble pepperoni. But wait, is anchovy pizza good? Anchovy pizza...

Clearly an article by subversives, with a goal to poison the world.