Recently there has been on the site some discussion about EU disputing the use of certain cheese (among others) product name usage here.

Now we are having a dispute about the use of the name Manuka Honey with New Zealand (NZ) who are seeking to trademark the name in China and thus locking Australian producers out of being able to use that term in the Chinese market. Big bucks create big fights and this one seems to be starting to boil along. 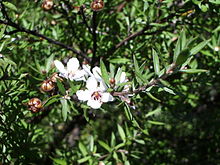 Leptospermum scoparium, commonly called mānuka, manuka, manuka myrtle, New Zealand teatree, broom tea-tree, or just tea tree, is a species of flowering plant in the myrtle family Myrtaceae, native to Australia and New Zealand. It is a prolific scrub-type tree and is often one of the first species to regenerate on cleared land. It is typically a shrub growing to 2–5 m (7–16 ft) tall, but can grow into a moderately sized tree, up to 15 m (49 ft) or so in height. It is evergreen, with dense bra...

One common name for the source plant is the Manuka myrtle. Although the common name originated in NZ. As has occurred with a certain style of Australian boots, nothing is ever certain with trademarks.

It is surprising China given it’s attitude to foreign product rights would offer any form of protection to a foreign brand name.

Will the same party try to register all the other common usage non-botanical names.

Interesting, when I was young, my late mother used to talk about the Chinese Gooseberries she would buy and peel to put in my kindy lunch in Sydney some 65 years ago.

No one had heard of Kiwi Fruit back then and they appeared in Cairns around 40 or so years ago.

Another item I was waiting to post on the forum but had not found a suitable category for was regarding Manuka Honey.

Whilst at the checkout at our local Chemist Warehouse a month or so ago, I was surprised to see all the Manuka Honey stocked on shelves on the back wall behind the registers.

Obviously theft of this expensive product must be so bad, they have had to take this step despite their attaching RFID security tage to almost every product, including even inside packs of over-the-counter medicines which are not security sealed.

A sad reflection on the society we live in.

Behind the counter also implies a pharmacist medicine, possibly giving it’s reputation a boost. Most people I know who buy Manuka honey (in preference to ‘ordinary’ honey) buy to eat it, but AFAIK the medicinal benefit is from topical application to aid healing of ulcers and the like.

Australia has been piggybacking on the success of the Maori name for Leptospermum scoparium and can see why the NZ industry would want to protect its name as it is indigenous to NZ.

If the shoe was on the other foot, say a NZ using an Australian indigenous name for a product they produced, how would we feel. If the market replied on the Australian name for success, I imagine that the Australian industry would take similar action to protect its own trademark.

I don’t know why the Australian industry didn’t use the name Broom Tea Tree or one of its Australian indigenous names to compete. Doing such may have created a niche market for Australian produced honey from the same species.

BTW, we often buy tea tree honey from either Melaleuca or Leptospermun species and it is one of our favourites (and to me tastes better than the ‘Manuka’ branded honey). It also has similar health alleged health benefits as well…and is about $10/kg from a good apiculturist.

This is behind the register counter near the front door, not the dispensary counter at the rear of the store.

success of the Maori name for Leptospermum scoparium

There is more than one way to look at whether Manuka has become simply a generic name, similar to how tea tree or blue gum might be used by some.

Others will probably decide if Manuka is indeed a unique product label or a name in more common use. So far the NZ honey industry has failed to gain a unique trademark in other places, (per the original post) in the UK or EU.

Perhaps they could also trademark as ‘NZ Manuka Honey’.

Agree there are plenty of alternate brand descriptions the Australian product might choose instead. In particular if Australian species of leptospermum can be shown to have higher levels of the active ingredient than the Kiwi version. Would it then be wise to have the same branding as the inferior NZ product?

Note:
Aussies seem to refer to a wide variety of plants as Tea Trees. Just not those of Genus Leptospermum, but others from the Myrteceae Family including Melaleuca, Sannantha, Baeckea, Babingtonia.

And then there is the historical argument as to the correct name for the tree.

FROM time to time a controversy arises in the Press on the question of the correct spelling of the name of one of our commonest trees—the ...

And 90 years ago, it was one of the “commonest” trees.

Query. So when are they going to ‘rename’ the suburb of ‘Manuka’ in Canberra as being a trademark violation?

‘rename’ the suburb of ‘Manuka’ in Canberra

Only if they tried selling it as honey or commercialise the name (make profit from the name). Otherwise anyone with a last name McDonalds would be in ongoing trademark dispute.

Maybe if they melted known the local pollies, a sweet elixir might result which could be sold as such. Maybe not, it may be more of a verjuice.

If I may make a slight amendment having lived not far from there, Manuka in Canberra is a ‘locality’ and not a suburb.

I worked in Manuka at a preschool kindy for half a year, and knew of that, but not Manuka honey, so when I first heard of the honey, I thought it must be produced somewhere in Manuka! LOL! I didnt know much back then.

It is surprising China given it’s attitude to foreign product rights would offer any form of protection to a foreign brand name.

Someone could probably get quick turnaround on a China TM for Trump Honey. Ivanka reportedly had no worries getting her many TMs there since 2016.

Looks to me like ‘Manuka’ is a suburb in the ACT… has it’s own Coles, Cinema’s, Church, football ground as well as ‘serviced apartments’… Was a heck of a lot smaller when I lived there in the late 80’s n early 90’s (giving my age away somewhat

) Check out ‘Google Maps’ which will show the place.

So when are they going to ‘rename’ the suburb of ‘Manuka’ in Canberra as being a trademark violation?

No need. The place in NZ is mah-NEWK-uh, in the ACT it is MAHN-uka.

Another article on the Manuka honey dispute which states that the Australian product has been tested as being as good, or better, than the NZ product. 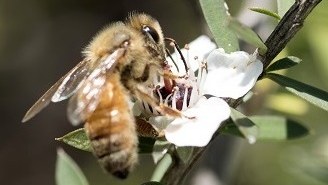 The stakes have been raised in the fight by Australian beekeepers to continue to use the name 'manuka', after a five-year study proved our medicinal honeys are equal to, or better than, New Zealand's.

the Australian product has been tested as being as good, or better, than the NZ product.

Perhaps Australia needs to redefine the problem, as suggested.

If Manuka is the brand let the product be properly labelled as ‘Manuka brand - leptospermum scoparium honey’ product of NZ. To be clear it is not from Australia.

With research to back up Australia’s claims perhaps as the article suggests, Australia needs to take the initiative. And promote ‘Australia’s Worlds Best - leptospermum scoparium/sp native honey’ product of Australia.

Putting Manuka in its place, as second best honey, as far as marketing goes.