An article suggesting that people replace their lawns with gardens.

Why lawn is secretly bad for your backyard

Home owners are being urged to take advantage of the winter months to get their backyards ready for summer, switching manicured lawns for a better alternative.

A lady we knew for many years said some time ago that the Asians will be saying that we were crazy for having lawns instead of something more productive as they do themselves.

An article suggesting that people replace their lawns with gardens.

I wonder if lawns are a European influence on Australia…many of the large estate homes in Europe have formal gardens containing manicured lawns.

In many respects, lawns are not ideal for Australian conditions as they require significant inputs (water, fertiliser, pest control) and maintenance to look good.

I wonder if community members have their own views on lawns and what alternatives exist?

own views on lawns and what alternatives exist?

In the back yard a ‘Patio’ would look good surrounded by plants, bushes and small trees to suit the size of the place, and a vegetable and/or herb garden if space permits.

Lawns are very nice but labour intensive: watering, mowing, weeding. Takes a lot of water to keep it green and lush, nothing worse than a struggling yellow grass patch; and often toxic chemicals, dangerous to kids and pets, are needed to keep it weed free.

I also think that caring for our lawns has gone the way of washing and waxing the car at home: just not enough time to do it anymore

own views on lawns and what alternatives exist?

Every urban house we have lived in has had a yard and a lawn. They’ve all needed TLC and generous amounts of expensive town water. Plus time, fertiliser, weed and grub control.

If ever again it would be turned into garden with smaller natives, home grown F&V and gravel paths. A small 10m square of couch might be all that we could handle. One of our Landcare group has done so on one of those miniature 250m2 modern urban blocks. It looks great, and is very inviting.

P.S.
In our current rural setting - I mow around 8,000-10,000m2. I call it bush fire protection rather than lawn. It’s never watered or fertilised. It gets an annual spot treatment of the worst weeds, and a mow as needed. The local wildlife seem to sort out most of the lawn pests, assuming you don’t mind the bandicoot aerating the soil.

The lawn mowing and fertilising team. 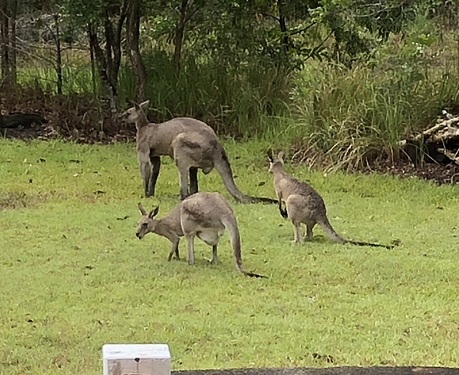 I still think I have too much lawn, aka grass to mow. 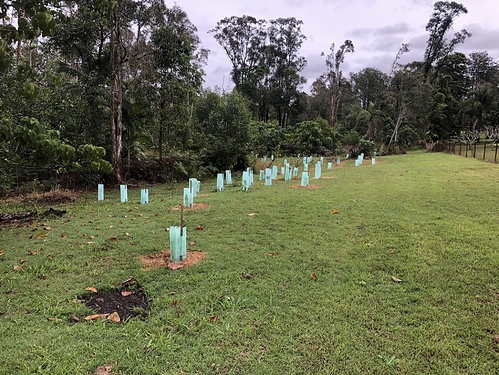 But can one have too many trees? I think not.

Advice on designing what goes around a house says to keep garden beds a distance away from the house external walls for two reasons:-

I love my lawn, we pay $100 every 3 months to have our lawn cared for. We have it fertilised, sprayed for weeds and pests. We don’t have a large area, but big enough to provide a cricket pitch, swings, a sand pit, cubby house and trampoline. Our children are adults now but our Grandchildren are enjoying our lawned back yard.

On the Gold Coast we have to keep the lawn between the kerb and the front fence because the GC Council will not allow plantings. Years ago we wanted to turn our frontage into a fruit/veg garden, leaving a kerbside strip for people to get out of cars, and a boundary strip for the postie to traverse. We asked Council if we could do this but were told that if we do, it may be demolished by Council.

Out the back we have a area of grass which is slowly being converted into a produce garden.

we have to keep the lawn between the kerb and the front fence because the GC Council will not allow plantings. 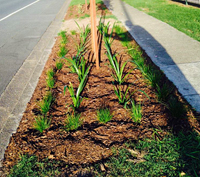 Council has developed guidelines to support residents establish verge gardens between property boundaries and the road kerb on residential zoned lands. Learn more about the guidelines, starting a footpath garden, who is responsible for maintenance of...

What can we say about the Gold Coast Council in comparison?

What can we say about the Gold Coast Council in comparison?

I once had several neighbour in the burbs who enjoyed a good stoush. We had these little nature strips in front of the house between the gutter and the concrete path about 1.2m wide. The Council insisted that these were the responsibility of the owner despite them being outside the property boundary and they had to be grass. Most were grass-ish. Some mainly weeds, some never mowed and a few done with loving care.

Neighbour A
Was annoyed when the Council came around and planted trees in all the strips whether you wanted one or not. Over a period of time many died or looked so ratty death would have been better. His died because he refused to water it and left a large eyesore. He harassed the Council so much about it they sent somebody to cut it down and remove it. Then he tripped over the stump one morning. So he harassed them again and again until they sent a team with a stump grinder to remove it. He then complained about the hole and about then they told him to fix it himself.

Neighbour B
Grew a vegetable garden and had a small sign asking people to help themselves. Council told him to stop it. He refused. They threatened him and he said see you in court, and by the way if there is a fine I refuse to pay it so you can send me to jail. And whatever you do, he said, I will get at least a half page in the local paper each time you do it. The paper was staffed by a crew who loved sticking it to the Council so he was right about that. They told him very sternly this was his last warning. He did nothing. He never heard from them again. AFAIK his garden is still there.

Neighbour C
Was at the steep part of the street. There was no room for a strip as the front of his property was a sandstone cliff about 4m high with the path at its base. He took a great deal of time and effort to turn the cliff into a rockery. It was wonderful for years and then he stopped maintaining it. I am not sure why. It became more and more overgrown until it covered the path and you had to cross the road as you couldn’t walk along that side. There were complaints. I heard that The Council sent stern letters demanding the owner fix it. I am not sure if that was the man who built it by then. Nothing was done. The Council sent a gang and a truck and it took two days and several truckloads but they removed every living thing they could lay hands on. It looked horrid. I don’t know who paid.

Nothing silly about nature strips at all.

I moved to a new house in a new town. My large footpath faces west - not ideal in Queensland. I approached my local council and was approved for tree plantings. This is their first spring and they’re looking good. Now if I could only get them to topdress the footpath to remove the uneven “grass” cover. I tried but was told it was my responsibility. Ah well - win some, lose some.

Now if I could only get them to topdress the footpath

How times have changed.

When we bought our first home over 40 years ago, our local Council would supply and deliver top quality soil to top dress the nature strips, free of charge, which a neighbour religiously took advantage of and used inside his yard instead.

They would also supply 2 trees suitable to plant on the nature strips for free. Residents merely had to visit the Council nursery at the botanical gardens to select and collect them.

We were recently told that Council has now banned planting trees on the nature strips.

The actions of the selfish, greedy few have cruelled it for residents wanting to beautify their street scapes.

The actions of the selfish, greedy few have cruelled it for residents wanting to beautify their street scapes.

There are a number of reasons why tree planting isn’t allowed on footpaths. They include:

If Council allows the planting of trees on the footpath they accept any impacts which can result from the planting of the trees. Decisions made within council are driven by public safety and liability. Anyway councils can reduce such risks is often pushed by their lawyers, accountants and insurers (where self insurance does not occur).

Unfortunately it is becoming more the case that residents also don’t want trees on their footpaths and when Councils do plant them, they are found dead soon after planting.