Is the truth always necessary?

Every day there are many reports in the media about fake news and how we live in the post-truth era. Daily a new account appears of one of our leaders being economical with the truth, of cover-ups and secrets kept through careful management of freedom of information legislation, or freedom from information as some would have it.

There are cases where we are told secrets must be kept for reasons of national security and it is hard to argue that this is not reasonable - if the matter really is of national security. Similarly we are given ‘commercial in confidence’ as a reason for secrecy and it must be required sometimes during complex multi-party negotiations but too often it seems to me that this is code for ‘likely to cause embarrassment’.

Some sections of the media proudly proclaim their credentials in tracking down and exposing government and corporate lies and truth hiding, some create their own lies hourly and some are in between.

Look at government and media responses to the pandemic. There seems to be some tension between governments who want to prevent panic (or disguise their incompetence) and the media who want to ensure we read the truth (or beat up a story and sell more clicks and subscriptions).

So what is new you say? In war the first casualty is always truth. The pandemic has been described somewhat excessively as a war. I have two questions.

It did not help the situation to incite people to want facemasks and COVID tests that simply were not available.

Images of empty toilet paper shelves went a long way towards causing shelves to be empty. Society created a problem out of nothing. Sections of the media, social media in particular, make a living out of generating and sustaining such self-reinforcing loops. There are obviously times when this is quite destructive.

The pandemic will be one of the great economic disruptions of our time and sadly some people are dying but it isn’t of the scale of a world war. How serious must the situation become before we give serious thought to the question of what truth should be told and when?

when is it reasonable for the media to abet this?

Never. The media should obey the law, nothing more. This forces the government of the day to expose any proposed restrictions to the scrutiny of parliament and the political process, rather than relying on cozy back-room deals.

Images of empty toilet paper shelves went a long way towards causing shelves to be empty.

Partly. You could equally well blame profiteering or even foreign entities.

However the right way of addressing that, in my opinion, is not to censor images of empty toilet paper shelves, but instead to ration - as supermarkets have done (voluntarily).

In my opinion, commercial-in-confidence should never apply to public projects. Part of the cost of doing business with the public sector should be transparency. If a company is not prepared to be transparent then it should voluntarily exclude itself.

I think many, myself included, would share your cynicism regarding how FoI and C-in-C are used to conceal failure and incompetence, and to avoid embarrassment.

if the matter really is of national security

There are times when this applies, but we definitely don’t have the balance right at the moment.

Reviving this topic because it seems relevant to a Chrome addon that was recently recommended to me. Increasingly, it seems, truth is relative. There’s a part of society that views any conflict between reality and its beliefs as a problem with reality. Associated media tend to report belief as reality. The addon deals with some of that media. 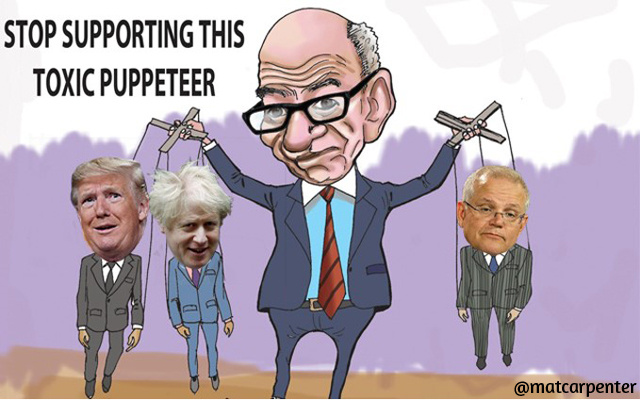 Installing this extension will block all websites that Rupert Murdoch controls.

Every day hundreds of thousands of Australians read online content that has been designed by News Corp to manipulate their readers views in order to push a political agenda. We’ve seen it in the past with the 2013 Federal Election, the National Broadband Network, the 2018/2019 Australian bush fires and more. When it comes to politics, Australians deserve an unbiased, fair report of proceedings, NOT low quality “journalism” that aims to make a man who renounced his Australian citizenship more money.

I made “Bye Rupert” in an attempt to stop giving his online businesses pageviews. Less pageviews lowers the amount of inventory the websites can sell which means revenue will drop. It will also allow users to support smaller websites that compete with News Corp who report the real facts without an agenda whilst having respect for their readers - something News Corp has long gone without. Put simply: installing this extension will block all websites that Rupert Murdoch controls.

Installing this extension will block all websites that Rupert Murdoch controls.

A pity that Big Tech caved in to the government then. You could have had those news web sites blocked automatically

without having to install an add-on with unknown functionality.

I personally would prefer to use something like PiHole if I wanted to block content - because I control it and I know what it is blocking.