How To Cook Your Steaks Correctly

This afternoon, I watched Donna Hay on the SBS Food TV channel contradict virtually every thing I have heard other chefs and cooks state about how to cook steak.

She started with 2 large thick pieces of rump steak which she placed on a tray covered in rock salt, then covered the top of the steaks with more rock salt, and left them for 20 minutes.

She then brushed off all the rock salt, brushed them with olive oil, and put the steaks on her BBQ, turning the steaks over every minute.

Once she believed that the steaks were cooked to medium rare, she took them back to the kitchen and sliced them, saying that she does not believe in resting them and that she likes to eat her meat while it is hot.

For your entertainment, amusement, and comparative cooking techniques

It is a difficult skill to salt down one’s arm, causing people to be wiling to pay $1,000+ for one of his steaks. 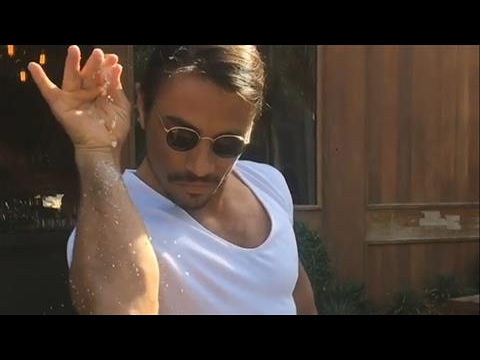 SBS Food TV channel contradict virtually every thing I have heard other chefs and cooks state about how to cook steak.

The thinking is not unique. Heston Blumenthal has a similar technique. I’ve used it a number of times. The result was great, although I suspect it is not so easy to judge with a thinner cut. I still prefer for really thick cuts, to sear (Caramelise) each side and place in the oven to cook to desired colour.

I’m not convinced that the Donna Hay salt bath is anything more than a silly way to waste good salt.
There is more than one technique for cooking rice. Why not steak?

Each to their own.

I was taught by a swiss chef back in the early 70s to flip flop steaks first to seal in the juices. Many chefs since have said only turn the steak once. Who knows where the truth lies in how to best cook a steak?

The truth is out there!

Using a bed of salt is a pointless waste, you can sprinkle the right amount on more easily. I would not do this more than a few minutes before cooking as if left too long it will start to draw out the juice. Juicy steak is desirable is it not? Rock salt? Make sure it is very expensive pink or purple rock salt from a country far away, this will show your sophistication.

On the turning I agree that frequent is better as it gives more even cooking through and quicker. My favourite food scientist Harold McGee has done extensive testing (not just repeating what he was told by somebody) and comes to the same conclusion.

On the resting it doesn’t matter if the steak is thin. If it is thick resting will tend to bring up the centre temperature and allow the juices to settle through better. Obviously the time cooking must be adjusted to give you the desired doneness either way. I prefer it that way as I don’t like the greater gradient of colour and it will be plenty warm enough. I could see that this is a more personal choice.

And at the risk of a holy war the reason to brown the outside on high heat is for flavour it is not to “seal the juices in”. I know Escoffier and various other pundits say the reverse but that is tradition it has no basis in fact. It doesn’t matter what reason you have do it anyway.

There’s no “correct” way to cook your steak. Mr Z has some autism; texture and colour are very important to him. His steak must be well done, with no juices weeping or any hint of blood or pink. He does not like sauces on it, although loves gravy served separately. I cook thus:

Pre-heat non-stick pan on low heat on largest gas ring, olive oil. Just before smoking add the rump steak (with fat trimmed off). When blood starts to weep through to the top side, turn and wait for blood or moisture to appear on the upper side, turn briefly (to brown the blood). Place on a plate and pour any pan juices over. Rest for half cooking time (5-10 mins). Turns out brown throughout, warn, tender and to his liking.

I have tried salting the meat for 20 mins but this didn’t make any difference. I have tried “searing” each side quickly and then turning twice. But the above method has been more acceptable to him.

There’s no “correct” way to cook your steak.

Yes in the sense that we do not all prefer our food to turn out the same but no in the sense that there are a great many ways to cook steak and only a few of them are likely to become food that at least somebody will like.

Expressed another way, if you have some technique the outcome is predictable, it is up to you to decide then what that ought to be according to your taste. If you have no idea then you cannot choose the outcome and the chances are not good of an enjoyable result.