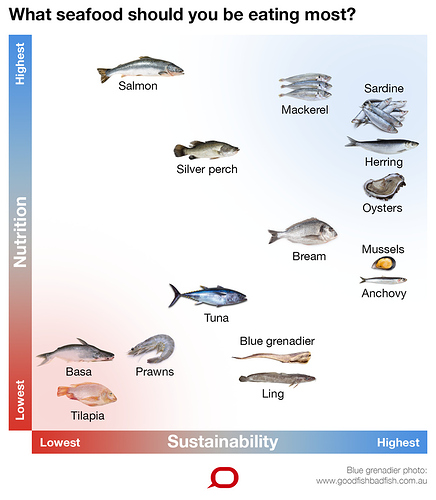 Here's the seafood Australians eat (and what we should be eating)

For the most nutritious and sustainable seafood option, try small ocean fish.

At last, a guide to fish and seafood that takes into account both health and sustainability. It doesn’t discuss mercury etc., however the recommended fishes are mostly small and less likely to have accumulated much mercury, plastic, etc.

It is strange that Tilapia is shown as being so low on sustainability.

I didn’t realise there were tilapia in Australia and wondered about their inclusion.

I know it’s one of the fishes commonly recommended in the USA for aquaponics, due to resilience across temperatures and broadness of diet. Those same characteristics would help it to thrive in the wild here. Not good!

Perhaps unsustainability is related to them being a pest, and not a species we should be farming or encouraging? The original article (in Frontiers in Nutrition) doesn’t say, nor does it include a relevant reference.

Tilapia are infesting Australian waterways to the great detriment of native fish species. 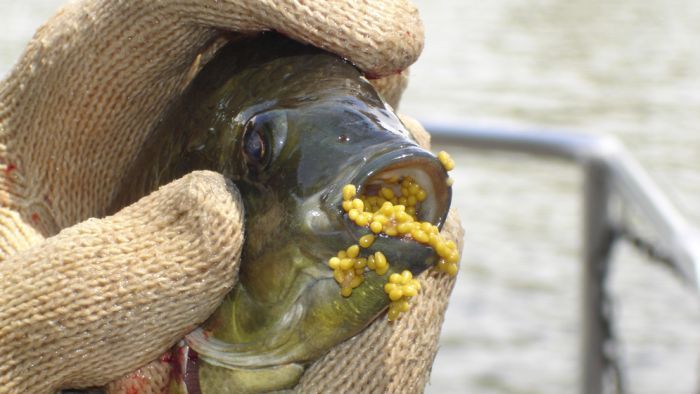 An invasive fish species called tilapia are taking over Queensland's freshwater catchments, and authorities concede they are powerless to stop the spread.

The Qld DPI has been trying to eradicate them for many years and at one stage were trialling electrical cables trailed from boats to electrocute them.

There was a fishing competition held recently at Lake Tinaroo on the Atherton Tablelands to see who could catch the most Tilapia.

That is why I was so surprised that the article you posted lists them as having such a low sustainability.

They are not good for the environment, hence not sustainable to have them there at all.

I wonder if this is an article that was poorly researched or just poorly presented due to an unintended bias?

One clue is that Barra (farmed or wild caught) and Snapper are nowhere to be seen on the list. Also the sea and estuarine mullet both oily and prolific and absent. Great battered or in a pie! Pilchards are great too!

There is no such fish as a herring in Australian waters. There is the Tommy Ruff also know as the Australian Herring. It is not related in any way to the Atlantic herring other than as a fish.

Sustainability is not defined. It has elements of abundanance, replenishment and methods of capture to consider. @Fred123 feedback on the Tilapia demonstrates this most directly.

You could add European Carp (also an introduced invasive pest fish of inland waterways) to the Chart on the same basis that Tilapia appear on it.

There may be a sound basis for the chart, however the reasoning of why certain fish have been included or excluded is not adequately explained.

poorly researched or just poorly presented due to an unintended bias

I tend to agree.

I don’t know of anyone who catches and eats tilapia…in fact, one can be fined in Queensland in doing so… 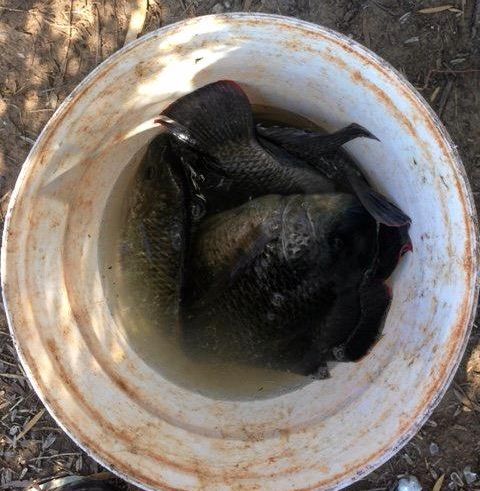 THE offenders were fined $3132 by Queensland Fisheries patrol officers after a member of the public reported the unlawful incident.

Tilapia is widely eaten in Asia, we had it regularly when living in China. It has a earthy fresh water fish taste and very fine and sharp forked bones which can make its consumption difficult for those not used to eating fish wifh such bones.

I suspect that Tilapia may be eaten by Australians with Asian hertiage, this this wouldn’t be as common as eating other fish species such as salt water varieties, which have sweeter and more pleasant tasting flesh.

I wonder if the figure has been pulled from some other report/article without the author understanding its context or meaning. If pest invasiveness was a measure of sustainability, then tilipia on the figure would be in about the right location…however, if one looks at the sustainability of the fishery which looks like has been used for other species, tilapia should be at the far right hand side. Removal of fish from waterways/fishing of tilapia would improve the environment and therefore improve the environmental outcomes/sustainability of the wayerway as a whole.

As tilipia is included and not known why since it is not supposed to be consumed (esp. in Queensland), then one has to question the accuracy of the whole article.

Likewise with salmon (assuming Alantic and not Auatralian salmon). If the salmon is imported from Alaska or Canada, then it would be sustainable as are right controls governing its wild harvests to protect the species. If bought from Australian salmon farms or imported from farms (such as those in northern Europe), these would seen to sustainable as they are farmed. They may have environmental impacts associzted with their farming, but this is different to tbe sustainability of the fishery.

Maybe the authors have confused sutainability with potential enfironmentzl impacts, or used by metrics in the one figure without realising that each one means. It is a bit like comparing apples with oranges.

@mark_m and @phb,
There is a word limit for TC articles, so they often have to leave out a lot. However, some of your questions might be answered in the full journal article, linked from the TC summary.

Also, if you ask questions in the comments at The Conversation, the article authors will usually reply.

@jen is correct there. The Conversation ensures that the articles are not too long, don’t have explanations that are too complicated, and not too jargony or data-drenching. It is designed to be inclusive of readers from all backgrounds and education and literacy levels. If the layarticle doesn’t answer your questions, definitely read the original paper. I love the enthusiasm!

The full article states the following in relation to sustainability.

I am still not sure what tilapia is unsustainable as it would be a wild species, a pest which left unchecked would cause significant impact on other fishes and its exploitation in Australia would have a positive ecosystem impact. A little confusing and potentially an error in the report/assessment. Maybe the tilapia figure was supposed to be on the far right as outlined above. It would then make sense.

I’ve read the original paper. The graphic, chart does not appear in the paper, although there are source tables with more detail.

Noted the paper has been independently written and published in an online journal, and uses principally data for other sources including Australian Govt survey data.

I’ll plead one level of ignorance, being a Queenslander. We do not have Australian herring, or their cousins the Australian salmon locally, and oddly not listed as an option given its abundance. We do have Blue Salmon and Threadfin Salmon, which are nothing to do with the spieces of Australian salmon/herring from southern waters. They all just look more like an English style herring than a shark and hence all have been given the same common name.

So the herring in the table is meant to be the so called Australian herring (not a herring), but the salmon in the table is the farmed Tassie Atlantic salmon (a real salmon) and none of the Australian wild salmon (not salmon at all).

If this sounds confusing, the graphic becomes all the more puzzling as it lacks the wild caught fish that some of us often consume.

The intent of the paper to suggest we change which fish we eat based on what is sustainable and what has the greatest food value is admirable.

The paper did point out there is limited data relating to sustainability and further work was needed in this area. The other factor not accounted for was the taste texture culinary attributes of each fish. Although after smoking in an Aussie bush fire for a day nor two and given enough tomato sauce even herring is edible. Kippers anyone?

I’m not sure that I am ready for the eat your horrible tasting fish, it’s good for you future.

And thanks for the link. It is an interesting project, rediscovering all those fish. 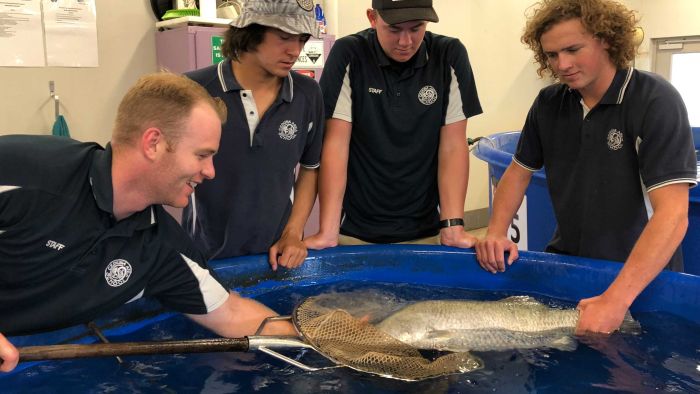 Demand for Ceduna Area School's barramundi from its student program is so high that the local pub's menu has had to change to accommodate it.

One has to wonder at the origin of the article based on the fish species displayed in the chart.

A visit to your local fish & chips shop or seafood retailer would provide a vastly better image of the types of fish that Aussies eat.

Reef fish species such as Red Emperor, Coral Trout, Nannygai, and many more.

Shoreline species such as the various types of Bream, Whiting, Tailor, Snapper, etc.

Other wild caught species such as Barramundi, Mangrove Jack, Trevally, Kingfish, Queenfish, and many more.

I think I have worked out the Tilapia…

There are a number of Tilapia species which are listed as being endangered, these include:

Oreochromis niloticus (Nile Tilapia which is not listed) is a commercially caught variety which is popular and common in supermarkets in the US. It is one of the world’s most important food fishes and is caught wild and also used in aquaculture.

Tilapia is also the common name for nearly a hundred species of cichlid fish from the tilapiine cichlid tribe. The specific tilapia species nominated in the report is unknown and it can only be assumed that the unsustainable tilapia is one in the above list.

Some of the species like Tilapia guinasana are on the IUCN list for being endangered due to pressures from fishing & harvesting of the aquatic resources.

It is not known if any of the endangered species have been imported into Australia and sold. There has been past reports that some tilapia has been imported and sold as ‘Kariba Bream’. This particular species is the same as one of the invasive/pesr species found in Australian waterways and indications were is was sourced from aquaculture in Indonesia and not wild caught in Africia. I can’t find, from a quick search, of other tilapia species imported into Australia for human consumption.

I suspect that the Tilapia listed in the report may be a legacy from USA assessment of the species of from the environmental impacts of tilapia/Kariba Bream production in Indonesia.

It however appears that the volume of Kariba Bream imported into Australia may be very small compared to many other fish species available to the Australian consumer from either local of imported fish stocks. Personally, I have not seen tilapia or Kariba Bream sold in any western or Asian style fish markets we frequent from time to time.

Possibly, the report has based the sustainability on the same criteria used for Australian salmon farming.

I find it surprising that the authors have decided to place the pressures on fish populations in the same bag as impacts from aquaculture. To me they are quite different.

The pressure on fish stock is particularly concerning as some populations one that pass a critical population number, the fish stock which once exist may never recover. Impacts from aquaculture can be very much on a farm by farm basis, with some with high level environmental controls to reduce impacts while others with minimal/no controls. The farming may be seen as sustainable in relation to reducing impacts on wild species, but may have environmental impacts which I believe is/should be a different measure to sustainability.

Being a relatively small import, I wonder why other species commonly caught commercially in Australia such as whiting (blue or winter), breams, sole, snapper, barra etc are not included in the chart. Silver perch (and blue grenadier and ling) which was included on the figure isn’t noted in the report (I wonder if this is American silver perch and not the Australian one). I suspect that maybe the figure is possibly not Australia origin and has been taken from another non-Australian report (such as USA origin).