We received this submission via Twitter, These wine drops claim they can reduce hangovers.

Is there any evidence to support this claim? We’ll be awarding the BS Buster badge for any help shining a light on this product. 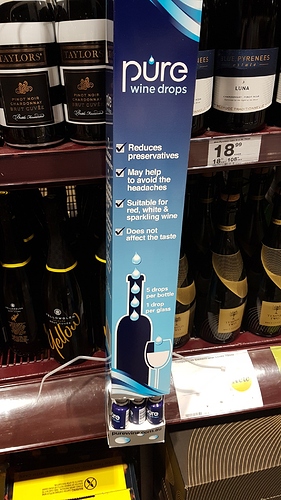 After reading the web site, might not be as shonky as it looks.

Not sure about reducing hangovers although it might alleviate symptoms caused by preservatives rather than too much drinking, but nausea and headaches, maybe.

I will buy a bottle in the next week or so and report back after sufficient personal experience. I am susceptible to preservatives although a Rennie is all I need when it hits.

After reading the web site, might not be as shonky as it looks.

Here are some academics discussing the concept:

I think the claim that is reduces hangover is shonky, as hangovers are principally caused by alcohol and its metabolites. Page 6 6of the book explains this:

Sulphur dioxide is a known allergen which is different to a hangover. If one gets the sneezes from drinking beverages with sulphur dioxide present, then the additional of a weak hydrogen peroxide solution may reduce the concentration of free sulphur dioxides, if there is adequate mixing and time allowed for the reaction.

The claim that it may reduce headaches, which is allergy symptom, may be correct, but there would need to be proven evidence that the drops as used in the video on the website and for drinks consumed immediately after treating , reduces sulphur dioxides to concentrations to levels less than that required to trigger a reaction in those sensitive to sulphur dioxide.

The Pure Wine Drops website states "We also believe the preservatives in wine are a major contributing factor to hangover type symptoms such as headaches, fatigue, nausea and lethargy.

There is considerable anecdotal evidence which demonstrates that preservatives actually contribute significantly to hangover type symptoms."

Even the results of limited trials outlined on their website had conflicting outcomes.

Believing something and anecdotal evidence is not proof that it works.

Based on this, it falls into the shonky category for saying that it prevents hangovers. The way to prevent handovers would be to find a magic drop that removes the alcohol…but this is possibly available anyway in the form of zero alcohol drinks.

Is there a metaphorical “ litmus test”?

For those of us who enjoy abundance, the quality of the night/early morning before can often be assessed from the extent and persistence of the after effects! The more youthful of us tend to take this to extreme to ensure a successful result.

If the drops do work, the assessment of the good time based on the degree of lingering after effects would produce a poor score “Must try harder next time outcome”?

Hence if the drops work increased consumption of alcohol under certain conditions is likely to lead to increased sales.

There is no need to test the myth. When wine makers start providing the drops for free with their product:
Either
A) it really does work and you can consume more without adverse side effects,
Or
B) it doesn’t work, but costs so little to produce it is just another convenient marketing gimmick. You know like the little black and white plastic scotch terrier figurines tied to every bottle of? Now that is showing some age😋

Ps alcohol as we are aware is a preservative, so why ruin a good drop of anything by adding other chemicals, 9 out of ten of our jars of museum specimens all agree. 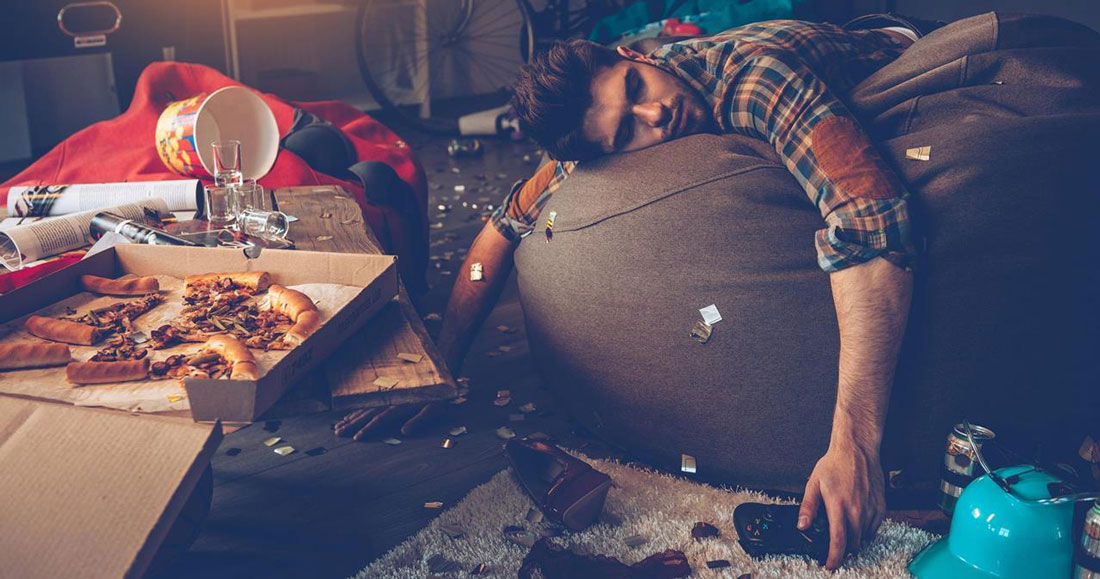 But before you stock up on Berocca and Gatorade, one man who spent 10 years 'studying' hangovers has some tips he would like to impart.

I will buy a bottle in the next week or so and report back after sufficient personal experience. I am susceptible to preservatives although a Rennie is all I need when it hits.

A bought a bottle and serendipitously found it on sale for $5 and tried it as scientifically as I could manage, although with many uncontrolled variables such as diet, but still think I experienced a trend.

My only related symptom is heartburn from seemingly random bottles. For process I had a 150ml serve (to meet the dose instructions) without the drop to see if it caused heartburn as a control, and if it did followed by a 150ml serve with the drop the following day. In each case depending on the initially perceived severity the drop seemed to noticeably reduce or eliminate ensuing heartburn. My ‘test’ would not withstand scrutiny as a test case in a research paper, so take it for what it is.

I have nor suggest there is any evidence the product reduces hangover symptoms as a group, but seems it can reduce at least one of the common symptoms, although heartburn and nausea might not be congruent. OTOH one Rennie has a similar effect for me and is much cheaper. I won’t be a repeat customer.

Thanks for taking the time to run this test, I’m sure that other Community memebers will appreciate it

My ‘test’ would not withstand scrutiny as a test case in a research paper, so take it for what it is.

It would need to be a double blind test.

Even though one may think there is an anecdotal difference, if one knows what it being tested the placebo effect becomes a very strong influence to the outcome.

I suffer with an allergy to preservatives used in wine, so shall also try an uncontrolled* personal trial.

Trial won’t be double-blind. Consumption rate will be controlled.

… indeed, ‘blind’ is bad enough, ‘double-blind’ would be some hangover

‘blind’ is bad enough, ‘double-blind’ would be some hangover

I bought a bottle yesterday ( $5 at BWS ). I added one drop to a 125ml glass and poured in the wine, and gave it a good swirl. I let it sit for around five minutes, and then consumed with dinner. My sinuses seemed unaffected, so so far so good.

When I explained the product to my partner, she asked, “Would it also remove the sulphites from my shampoo ?”. That led to an interesting discussion over dinner.

( Sulphites in shampoo reportedly kill the benefits of using a keratin-rich shampoo. Maybe that is another question or two to be mythdefied ? )

I understand that over time the sulphites in wine disappear over time…so firstly assuming that sulphites have been added as a preservative in the first place, enjoying a bottle with some age may have the same effect as adding drops to a very young preserved wine.

To be fair, it is worded “hangover type symptoms” which is part of what sulphite reactions may cause. I don’t see where is actually claims to prevent or cure hangovers.

In my vast experience of alcoholic research, I have found dehydration to be the #1 cause of hangovers if sulphites aren’t involved. Drinking enough water some time during or after drinking eliminates any hangover symptoms for me. Beverages that contain high amounts of sulphites will usually give me headaches regardless of how much water I have.

In my vast experience of alcoholic research, I have found dehydration to be the #1 cause of hangovers if sulphites aren’t involved. Drinking enough water some time during or after drinking eliminates any hangover symptoms for me.

I’ve had plenty of hangovers in my day, but ever since deciding to separate every glass of booze with a glass of water, I’ve never had a single hangover.

Why not blind your experiment? Put a label on the bottom of each of two identical glasses, one with “yes” written on it and the other with “no”, such that you can’t see the writing even when drinking from the glass, and the glasses look the same.

In the “yes” glass put a drop of the magic potion, and in the “no” put a drop of water. This assumes the product is colourless - otherwise add food colouring to both so they look identical. Then (have someone) switch around the glasses so you don’t know one from t’other. On each of the next two nights, pour and drink a glass of wine, and on the third day after you rise again, decide which glass appeared to positively affect your tipple. Only then, look at the labels.

At my work site, we pay $60 for 15L of 30% Hydrogen Peroxide which is dosed as a biocide into our potable (drinkable) water plant. It contains a stabiliser as H2O2 breaks down easily to oxygen and water when exposed to light which is why it is stored in dark containers. It is harmless once broken down after reacting. These wine drops claim to be <3% so 4ml would cost us 0.16 cents plus packaging when diluted down. It would be cheaper in bulk.

Ps alcohol as we are aware is a preservative, so why ruin a good drop of anything by adding other chemicals, 9 out of ten of our jars of museum specimens all agree.

Many museum specimens use formaldehyde as a fixative before placing in alcohol. I reckon that may affect the bouquet of wine. Alcohol in certain beverages can ferment to vinegar over time under certain conditions. I’d suggest this may be what the wine makers are trying to avoid.

Agree, but (with a big but) why didn’t they state ‘allergy type symptoms’. If they had been more correct in their marketing, then there would be less of an issue.

Using the term hangover infers that it may have a benefit to reduce hangovers, which it won’t

I’m now able to report that after some more personal experience, I’m not convinced that the drops alleviate my allergic symptoms. Over the course of 12 glasses of red wine, from different winemakers, on different days, I found that only three glasses left me reaction-free. On the occasions when my sinuses reacted, there may have been a slight lessening of symptoms, but at this stage I wouldn’t bother using the drops regularly.