An article regarding Geosciences Australia to stop printing and selling topographic maps from December. 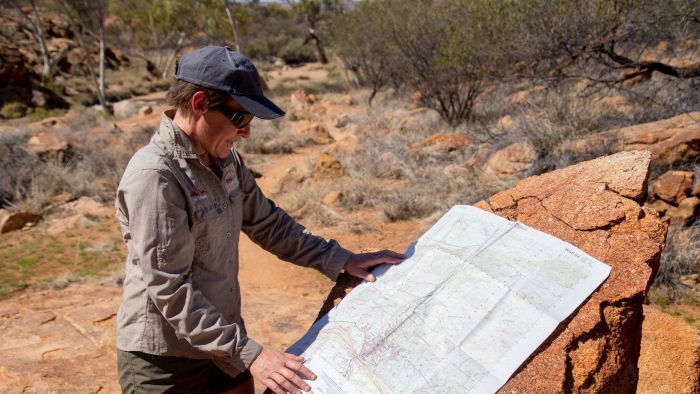 Bushwalkers and map sellers say the decision by Geoscience Australia to stop printing and selling topographic maps will put people's safety at risk.

I wonder what the military uses these days?

Have quite a few. Might have to stock up before December.

Anyone who thinks that a non-topographic map on a 5" phone screen is a substitute is kidding themselves.

I wonder what the RFS uses?

Rather ironic that they chose Friday 13th.

I wonder what the military uses these days?

Now where did I put my A0 screen iPad down?

P.S.
That would need approx 1456mm screen. Just round it up to 60inch for the US market and Apple to think about.

Just round it up to 60inch

A 60" iPad ? I’m not coming anywhere near the lithium battery on one of those

I don’t think my bank manager is letting me near one of those anyway.

The article suggests people print their own. I would suppose that most people have an A4 printer and a few people may have an A3 printer. So to print ones own would really require downloading onto a flash drive and taking it in to an office printing place and paying non-trivial amounts of money for each sheet.

And then there is the question of copyright unless the Federal Government relinguishes it.

I was going by:

Certainly better than nothing.

I used to buy quite a few maps for business use decades ago and they were not cheap so hopefully users will be able to get them printed at a reasonable cost.

Apparently doubles as signal mirror for when the battery goes flat and you realise that without the map you are hopelessly lost.

P.S.
GPS can be useless in denser forests although with accelerated land clearing you seem to get lucky often enough.

Free download is half way to the right solution. One of the things our American tyrants do better than us is having it illegal to copyright public documents, and it seems that just about all public documents are available free. Here, public and state governments routinely charge extortionately for what should be public domain info.

So free download is certainly good, but if the economics of printing high quality maps for normal retail distribution is so prohibitive, then what’s to stop Geoscience providing an at-cost service printing and posting on demand?

As for the question about the armed forces, I suppose they’ll just have to buy their maps from the US, like most other things.

Here, public and state governments routinely charge extortionately for what should be public domain info.

The US has a history of expectations that government delivers something to its citizens and residents in return for taxes beyond pollie pay and perks.

Australia has an increasing tendency to treat tax income as money for the pollies and everything for the rest of us has to be paid for a second time through fees and charges by whatever name; eg government is run like a for-profit business. As we live the reality, some businesses are more profitable than others, and those not profitable enough for government get closed.

Voters endorse this by who they elect, not that any of the viable alternatives would do much differently.

It is a tradition, examples of which can be found stretching all the way to the early days of colonisation.

The rum trade comes to mind.
Or the East India Company if you look further afield to the parent for inspiration.

And for more important things.
Early exploration includes a mishmash of funding options for exploration expeditions. From Flinders who had the support of govt in a tiny open boat to circumnavigate the coast to Burke and Wills who were funded by the Royal Society of Melb.

So much has been done and achieved in difference to the lack of an open public purse.

By the late 19th century the British Govt saw the opportunity to save what to it was then a loss making enterprise (Australia). Federation was encouraged, but on terms acceptable/favourable to the British Govt.

That most brands of politics hold similar values regarding public service is no surprise. It’s in their DNA.

Perhaps an opportunity for yet another Choice consumer product review of alternate digital mapping services, paid and free options. @ScottOKeefe?

Although if you can download for free the whole of Australia in high detail grid referenced, has that just killed the Australian mapping industry?

I used to use those maps in my youth when bushwalking/hiking. They were not expensive to buy, and there were lots of mapshops to buy from.

I went to Geosciences Australia (GA) some 10 years ago to look at their maps. I must say I quickly backed out the door when I saw the prices. You had to have a real pressing need to justify the cost of buying one.

It should be remembered that GA produce topographic maps, but there are other maps which will not be phased out (at least not in the short term), and they are

I think it would be foolish to rely on digital maps once leaving Australia’s seaboard population areas. I wonder what people in remote areas where there is no reliable power or phone signal will do?

Maritime maps. At least the seafaring vessels still carry and use hard copy maps too

They are required to carry the maps for the sections they sail in on large and commercial vessels eg trawlers, cargo even in domestic waters. This requirement exists even if they have state of the art GPS and electronically stored maps.

I think it would be foolish to rely on digital maps once leaving Australia’s seaboard population areas. I wonder what people in remote areas where there is no reliable power or phone signal will do?

Digital maps would need to be downloaded prior to the trip similarly as one would buy hardcopies prior to the trip. If the batteries are good and the device rugged and reliable it could work but looking at the local terrain in a bigger picture on a small screen could be more than challenging. I could imagine challenging enough so the ruggedness of the device could be tested in the field.

As map (re)sellers lose one product they might offer another in lieu. If you mean those without service where they live in the regions and bush, arranging maps on a USB might become ‘products’ as would receiving hardcopies in the post. It seems 4WD and bushwalking organisations could be keen to step up. Maybe not because if government allowed that it would also have to admit neither the NBN nor mobile services are up to it, and they could not politically do that even though it is common knowledge.

I’ll one again take the position that maps are another offer from government that they operate as a business not a service, and those ‘honourable’ MPs who have never ventured outside Canberra or the state capitals or major metro areas defer to the likes of google maps in the mistaken belief that is similar enough, it is free, so why should government persist.

They are required to carry the maps

Re aviation this is a good intro

Thanks Phil that was interesting.

As suggested there are work around or off the shelf products for most situations.

I still wonder how it all works if you have no GPS for one of many small reasons. In some situations loosing the support of your digital map device and or GPS might not be that life threatening. In others it may be essential to have more than one.

Having to activate an EPERB because your gps enabled mapping device failed and you can’t find your way to safety might be too embarrassing.

I hope they continue to update the toppo maps after they stop printing.

Being slightly ancient I still know how to use a military style compass and protractor. If only the screen on the iPad would stop rotating the map every time I try to plot a bearing!

In some situations loosing the support of your digital

I have always been of the opinion that those who survive will be those who know how to hunt, fish, butcher, farm, and forage with no reliance on anything modern. If (when?) modern technology fails it could be ‘the big one’ and those of us in cities will pay the price worse than anyone.