The Federal Court has penalised Valve $3 million for refusing to offer consumers a refund, which is a consumer guarantee.

The ACCC received more than 20,000 complaints over consumer guarantees. More than a quarter of total complaints were around returning electronics and white goods to retailers, and some of the common statements made by retailers sparking complaints are:

Did you get a faulty product this Christmas? Make sure you know your rights. 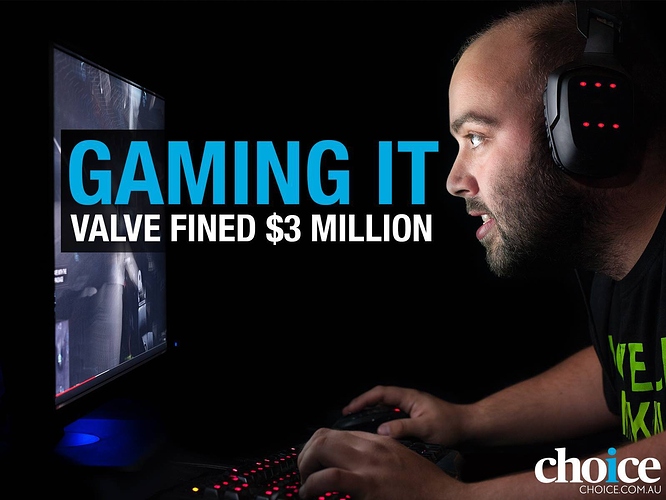 Hooray , hooray , Valve finally get their just deserts . They got too big , too powerful but their treatment of customers never a grew along with the former . Maybe now they will see that there are PEOPLE behind the money being spent on Steam .

This is wonderful news! Valve will be forced to return to the old policy of “the customer is always right” and hitting them in the hip pocket is the only way to teach some companies to respect the customer. It is marvellous to see people power in action and hopefully Valve will finally learn their lesson and listen and respect the consumer more than they have in the past.

Good news in theory…but Valve is US Corporation and unlikely to have any assets in Australia. So the ACCC won’t get the money unless it is prepared to pursue the judgement debt through the US courts. This effectively becomes a retrial with Valve having the home court advantage. Can Choice tell us if Valve ever have to pony up?

@Marnie, good question. Failing to pay the penalties would affect their ability to do business in Australia, but complications as you have suggested are always possible. Hopefully this won’t be the case for Valve, but if so, we’ll let you know the developments.

Yet, telcos daily get away with their dodginess, inability to admit fault, backed by their major franchisee - the TIO…disgusting how one company is fined so hugely and no doubt deservedly - whilst other greedy, lazy companies walk away with a slap on the wrist…unfair that consumers are expected wear the telco rip offs, again and again…

Any updates on Valve beyond what google found (A Feb item)?

Valve Is Appealing Against The $3 Million Dollar Australian Consumer Fine

A source has told ChannelNews that Video game distribution giant Valve has lodged an appeal in the Federal Court against a ruling made against them last year, which would see them fined $3 million dollars for breaking ACCC rules. A court ruled on...

The High Court of Australia has dismissed a special leave application by one of the world’s largest online gaming companies, US-based Valve Corporation (Valve), which operates the Steam game distribution platform. Valve had sought special leave to...

Yeah the Valve Group would try to re-contest the issues as they like any business don’t want 1, to give up any money they don’t have to and 2. they don’t want the precedent to stand as it will set an ongoing standard they and others will have to meet. So very glad the HC dismissed the special leave application and cements the precedent into Case Law.

A good outcome. If one reads the original judgement, it was clear that Valve/Steam were attempting to negate their consumer responsibilities by trying to remove, through T&Cs, those requirements which did not suit their business model/profit line.

It does show the strength of the ACL at a high level and also that agreements such as T&Cs can’t override statutory consumer rights.

It was quite a while ago that I had this experience, but I thought I’d share it here. I also submitted this into Choice’s submission to the inquiry into refund rights.

Some time ago I purchased The Elder Scrolls Online through Steam. After about a week straight of my computer downloading the game, I opened it to the launcher (a separate application that manages patching [updating] the game). I attempted to patch the game so I could play, but on reaching about 90% patched the update would ‘fail’ and need to start again. Another week of downloading and it still hadn’t successfully managed to patch the game so I was unable to play.

My first go to was to log a support ticket with the ESO support team. After several days I’d heard nothing, so I requested a refund through Steam, stating in my request that ‘I have 79 hours played according to Steam as that was the time I had the launcher open trying to patch the game. I’ve been totally unable to actually load the game itself.’ I rapidly received a reply stating I could not get a refund as I had 79 hours play time. I responded by reiterating that was 79 hours in the launcher and I hadn’t been able to launch the game itself. The next reply simply said that was not within their refund policy and they were closing my request.

I wound up uninstalling the game and spending another 2 weeks downloading it and that fixed the issue, but it was disappointing I had no help resolving what was a clear ‘major flaw’ with the product I purchased. As for the ESO support ticket, after a month I got an automated reply asking if I still needed support. So much for that.

I bring this up now because with yet another digital games store now available (Epic Games Store) this is STILL an issue in every digital game store available. They offer a minimal refund system that doesn’t allow for cases where you’ve received a faulty product or experienced an issue but didn’t discover it within 2 weeks of purchase/a set play time (varies by store). As consumers we need to make more noise about this!