I have only just noticed this with the packaging in the apples I recently purchased. Why bother telling consumers apples are so called " wax free" does this mean prior to me seeing this that they were covered in wax but now they are not. First time I seen this. Maybe you guys at choice need to investigate this further. Why not approach the supermarket directly or look out when you shop next time and you will see what I mean. 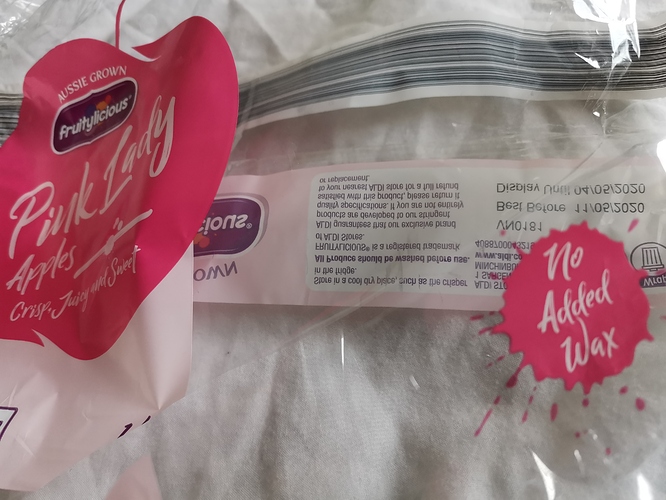 Why bother telling consumers apples are so called " wax free" does this mean prior to me seeing this that they were covered in wax but now they are not.

Apples in grocers and fruit shops were commonly waxed for many, many years to make them look more appealing, in addition to their natural surface sheen. This might explain.

After apples are picked they are washed, which removes their natural wax so often a food-grade wax is applied to replace it to return the apples' shine.

In these days when people seek out more natural products added wax has become a deterrent to many consumers so it is not surprising the marketeers present it front and centre on their packaging.

Where did you buy them?

Apples may soon have a bit less of a shine to them, with the major supermarkets announcing they are phasing out selling waxed apples.

It could be like selling some meats as hormone free, when in Australia hormones aren’t used to accelerate meat production rates.

It is possibly a marketing misnomer…or advertising something which does not really mean anything.

Waxing still occurs from foreign suppliers and is done for some OS markets. Thus some product that is waxed can end up on shelves domestically, I believe that it must be advised that it is waxed but I am unsure. While mostly just a selling gimmick in my opinion at least they could be held to account if wax was ever used.

APAL state in their article linked by @PhilT that waxing is Best Practice. The article that references this is from 2016 but also has been amended to disclose that Coles and Woolies would not be supporting waxing fruits in future from 2017 as noted by @phb. This is however still considered best practice as apples have a natural wax coating that protects the fruit and is lost when the fruit is washed before packaging and so generally a coating of wax is applied after this wash to again cover the fruit and make it appear shinier. It also has a possible list of other benefits:

“Also, some research shows that waxing apples helps to keep apples crunchier and firmer for longer by retaining moisture inside the apple and preventing the apple going dry and shrivelling up. This helps increase the shelf-life of the apples and adds to other factors that contribute to consumers having a good experience when they eat their apple – such as the variety and taste of the apple.”

The article also notes that a whitish powdery looking coating may be seen, this is likely Shellac wax that has had a temperature change that makes the Shellac go white but is quite safe to eat. If you see Glazing agent 904 this is Shellac wax (if Vegan you would probably want to avoid this as it is an animal derived product), 414 is Acacia gum or Gum Arabic, 903 is Carnauba wax.

Many of our local F&V shops sell obviously waxed apples. They look so much more ‘come eat me’ (tastier) than the unwaxed ones in the Colesworth shops. I doubt they are imported apples, but never thought to ask since nothing suggested they were.

i purchased them at aldi. i just wondered why i had not seen it written on the packaging before. the apples still taste fine either way.

i just wondered why i had not seen it written on the packaging before.

My best guess is a new marketing / ad team that is more savvy about touting current ‘in vogue’ trends.

Can’t say I have noticed this anywhere as I buy loose apples.

Perhaps Aldi have moved from selling waxed fruit to non-waxed fruit, and are wanting to let you know?

Many of our local F&V shops sell obviously waxed apples

When I was a teenager, the leading picture theater in Cairns had a fruit shop on the corner which was operated by a Chinese family.

They would individually stack each piece of fruit on the sloping displays and they would polish every apple with a cloth.

I don’t know if they were waxed but they were super shiny and a sight to behold, even for me as someone who does not like apples.