Yesterday we released our report - End the Sugar-Coating (PDF), which makes the case for added sugar labelling in Australia. The key findings from the report include that added sugar labelling could help individuals avoid 26 teaspoons of unnecessary sugar each day and up to 38.3 kilograms a year.

We would love your help! Join the campaign at www.choice.com.au/addedsugar and please share to your social networks. Huge thanks to everyone who contributed to the campaign via the CHOICE Community. 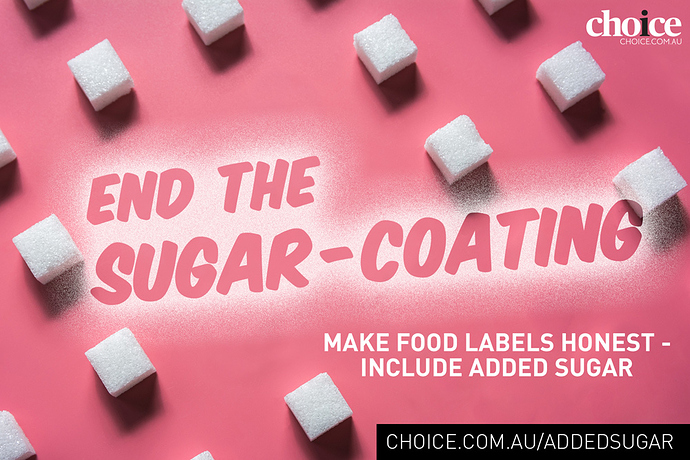 Signed the letter to the Minister

It is a shame that sugar cubes are not as popular now as they were a few decades ago…as this would be a great way to display visually the amount of sugar in a product. Would also be hard to manipulate the image to make it look better than it is.

A sugar cube is slightly bigger than a teaspoon.

The NZ Minister for Food Safety, Hon. David Bennett has replied, but nothing more than acknowledgement of the letter so far from Oz ministers. It looks like nothing will happen until after November.

You have raised an issue that Australia and New Zealand are currently considering. In 2011, an expert panel that reviewed labelling law and policy recommended in its report ‘Labelling Logic’ (http://www.foodlabellingreview.gov.au/internet/foodlabelling/publishing.nsf/Content/home):

Ministers considered a report in November 2016 and recognising the complexity of the issues, asked that sugars and fats/vegetable oils be progressed as two separate pieces of work.

Yes received a reply from David Bennett . Interesting update on where things are heading .

Also received the same response from NZ. Only have received a auto reply from OZ but expect a response after the spin doctors draft up a non-committal reply…which ia the usual reaponse from any OZ politician (no matter what party they belong).

Been away from the computer, but have now sent the form off into the ether.