Dymadon Medicine for Kids and for Babies

Interesting with Dymadon medicine for baby’s and for kids
There is two types , one for Baby’s and another made for kids

Which calculates as the same

Plus Recommended dosages are based on 15mg of paracetamol per kg in body weight. For both 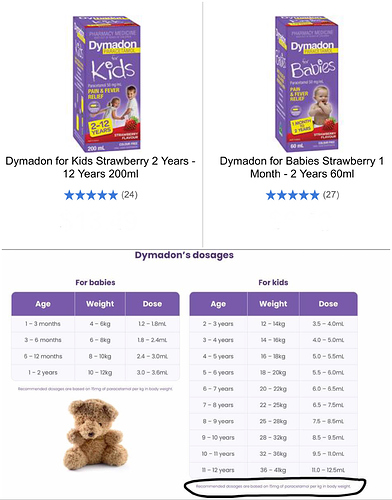 Nurofen's fine for misleading consumers is raised from $1.7 million to $6 million after a successful appeal by the ACCC.

Since individuals sometimes have little impact as a voice of one perhaps @BrendanMays could tap the most appropriate Choice Staff to follow up to have a look and if appropriate, make a complaint.

While the concentration of paracetamol is effectively the same, the bottle design and dispensing is different. It also appears the packaging size is similar, and there may be a reasonable reason why…

The bottle for babies comes with a syringe type dispensary kit, while it appears the kids one has a standard liquid dosing method, namely pouring contents into a measuring receptacle.

While the baby bottle may be smaller, packaging may be the same to allow packing of the dispensary kit.

Dymadon Oral Liquid Paracetamol for kids & babies provides relief from pain and fever in as little as 30 minutes. It is effective and great-tasting too!

The differences in package contents/dispensary methods could attribute to difference is cost even though the contents seem similar.

Unit pricing for smaller amounts is usually higher for many products. The baby bottle is possibly smaller as dousing amount is significantly less and potentially to reduce wastage from the contents expiring before they are fully used.

Many medicines marked as being for babies has a syringe style dispensary as it can be more accurate/easier to get the exact dose right which is important with babies where sensitivity to doses us greater. It would be reasonable to differentiate a product suitable for babies and kids, where dispensary methods are different even though contents may be the same.

It is also recommended that one seeks advice from a medical professional before giving any over the counter medicines to babies.

It is also the case where some medicines appear to be effectively regulated by high pricing to dissuade use unless one really needs it rather than just wants it because it works for the customer.

That is anecdotal, but seems right when international prices from similar outlets are compared. In this case the baby product might be priced to dissuade use in infants unless there is a clear need.

There are many possible reasons, some justifiable and others maybe not so much?

packaging may be the same to

There are a great many reasons for prices to vary aside from the value of the content, in this case the active ingredient. Packaging, marketing and competition are just some. For this product the delivery is just as important as what it delivers as it is aimed at parents being able to give a measured dose to a child who cannot take pills.

Paracetamol is now out of legal protection so anyone can make it without a licence. The active ingredient is not expensive to synthesise so all kinds of anomalies can occur. Look at the price per gram of the no-name versions against the brand names like Panadol and Tylenol.

I see no prospect of any action against them being a success, there are too many ways to explain the anomaly unlike the Nurofen naming debacle.

It would be reasonable to differentiate a product suitable for babies and kids, where dispensary methods are different even though contents may be the same.

It appears logical.
Whether that is consistent with the suggested difference in unit cost or just convenient remains difficult to assess?

It would be useful to identify whether the different packaging for essentially an identical pharmaceutical is based on direct TGA advice/regulation for the product and intended use, or at the manufacturers discretion. Only one answer required?

There are many possible reasons, some justifiable and others maybe not so much?

We’ve bought both bottles in the past 12 months. I believe it is just a marketing ploy; both bottles have the same dispenser.
It’s hard enough when you’re a parent of a sick child, then you start to question yourself when you give the kids medicine to a baby.
I’m prepared to pay a premium for smaller packaging as that can be a convenience (ie keep a small bottle in the nappy bag), but I don’t like to pay more just for a picture of a baby on the bottle.
Regarding the dispenser, I’ve found some systems can be removed reasonably easily once you’re at the end of the bottle, so keep the dispenser system for other medicines that don’t supply one.

My daughter has a baby that wasn’t well and was in a small country town and they had the kids version and not the baby version so she didn’t buy it and went straight to the hospital;
But the hospital told her it’s the same stuff, same dispenser just a different label .