On Thursday I went to Woolworths and bought two loaves of multi-seed grain sliced bread based on the label photographed. The bread looked the same as the others, but had an additional circular yellow sticker on it which showed it was low GI. 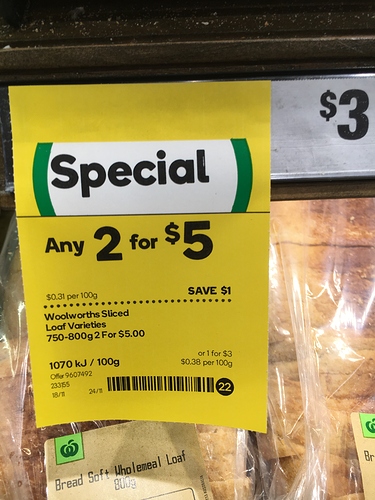 I was in a hurry, so only checked the register docket when I got home. I had been charged $6 for the two loaves instead of the $5 I was expecting.

The next day I went back and talked to the customer service person who checked with the bakery only to be told that the $6 was correct even though the loaves were WW sliced 750g.

I asked him to show me where it said that the low GI was excluded, and his response was that the pricing only applied to the bread below the sticker not above the sticker and the low GI bread was different.

After pointing out that it was deceptive advertising and going around in circles a couple of times, it was apparent that he was a doer and not a thinker, and had no clue about consumer law. So I left to do the rest of my shopping.

Ironically, the bread there including the low GI bread in contention had been marked down to $1.95 a loaf, so I grabbed a couple more.

What do others think? Is the extra low GI label enough to exclude it, or should the low GI bread have been charged at the advertised rate?

It seems to be extremely poor form as Woollies 7 seeds low GI 750gm bread and their 800gm loaves are normally priced at $3 each.

However, the images of the 800gm loaves do show a special offer of 2 loaves for $5 which the Low GI bread does not show.

Coles sell their version which is 800gm for $3 so slightly better value.

However, the images of the 800gm loaves do show a special offer of 2 loaves for $5 which the Low GI bread does not show.

Agreed. But there is nothing on the shelf labelling pictured which excludes the low GI bread. Without that exclusion, I believe it should include ALL loaves which fall within the criteria on the label.

I agree. They covered themselves on their website but it is poor service instore.

His explanation was that the bread I bought from a higher shelf was low GI bread, and was not included in the pricing on the label.

The label would apply at least to the shelf above that which the label is fixed. All supermarkets put pricing on the shelf holding the products, not the shelf above. If they did, it would be confusing for a customer to shop at one supermarket one day, and another the next.

The fact it says Any 2 of the Woolworths sliced Bread 750-800g varieties should mean any of those Woolworths branded breads are included. It would need to specifically exclude the low GI if that was the intention. I would say it was even deceptive marketing practice.

I would say it was even deceptive marketing practice.

I agree and I would be writting to Woolworths website with a formal complaint. This can also be done through the Everyday Rewards Card login. Attach the above photo and what you were told…as well as info in this thread.