Could the COVID-19 coronavirus affect your superannuation?

Worried about how the coronavirus might affect your super? No need to panic.

What are your thoughts on the coronavirus impact on investments?

Could the COVID-19 coronavirus affect your superannuation? - CHOICE

Markets have reacted to the public health crisis, but 'barefoot investor' Scott Pape says there’s no need to panic about your retirement savings.

I know my current balance had gone down about 7% over the past month, last I checked a few days ago.

Those with super funds which invest in oil companies may be hit quite hard, given recent developments in the Saudi - Russia price war.

What are your thoughts on the coronavirus impact on investments?

The inpacts will be short term. Historically, disease outbreaks only have a limited duration where society, and its health, returns back to normal. With modern medicine working flatout to find drugs and a vaccination to protect fhe broader community, they are likely to succeed …while it may take some time (estimated are 12-18 months).

If one is planning to retire in the short term (wighin say w years) when the impacts of the coronavirus are at their greatest, and these retirees have exposure to investments impacted most by the panic, then they are likely to be the most worse off financially. For the remainder, in the medium to long term things will return to normal (the virus will be remembered as a blip).

One has to think of the future rather than the events of a day/short period.

coronavirus might affect your super? No need to panic.

Hopefully.
All great advice in the Choice link on the best strategies.

Most super funds once they move clients to a pension phase are very defensive in their asset allocations.

I had my industry super split between short term low risk (stable investments) and longer term medium risk. When the GFC hit the overall impact was negligible with no gain in value for several years rather than a large loss. Australia was slow to rebound, but having not gone into recession had lost less than many other nations.

I should have also said that, if one has spare cash or excess in cash in super, and downturn in the market provides buying opportunities for equities and other investments heavily impacted. While it may be negative for those about to retire, it can be a positive for those who are risk takers and beleive that the market will return pre-coronavirus levels (which historically shows it is likely to occur).

And with any financial decision making, get the right advice from a suitably qualified, independent and recommended financial advisor.

Just what I was thinking about the other day, it seems like a good opportunity for some. If only I had some cash!

With any serious financial disruption there are winners and losers. Since super is share market dominated some realities. Apologies for using the US market as an example but I am most familiar with it.

Consider the timelines for recoveries each time it tanked. One could argue the DOW is not the whole market and the S&P500 or another index is more relevant, but differences are irrelevant to the point but I’ll add both. 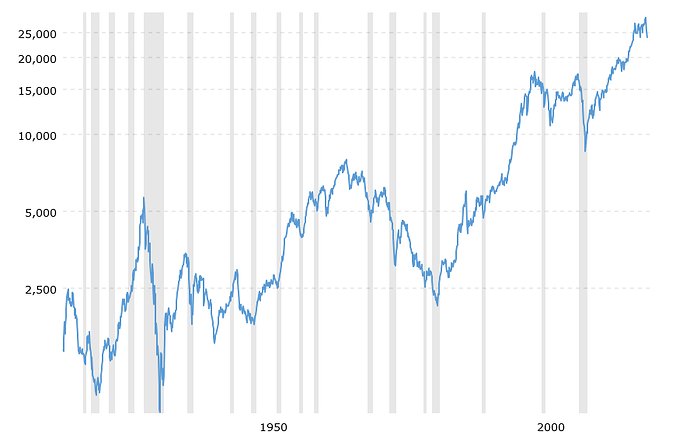 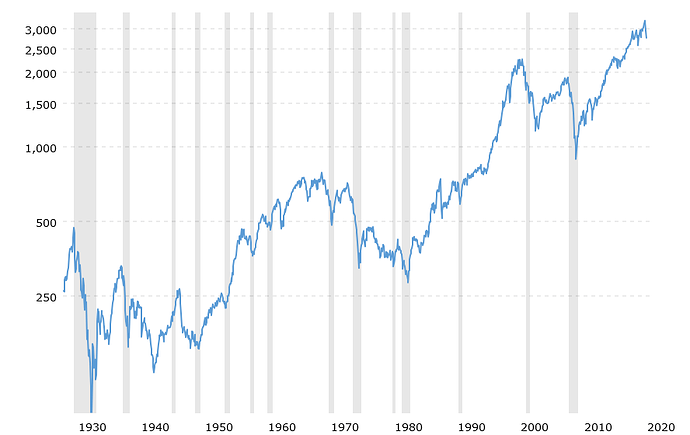 A ‘this too shall pass’ is what brokers and financial types do. If you had the worst hit from the 1929 crash you were even around 1955. From the 1965 correction it was about 20 years. The 2009 GFC was over fairly quickly in comparison. This one? TBD.

edit: the financial community often uses the resumption of upward prices (eg a bullish market) as the end of a crash, not the point when parity with pre-crash net worth is achieved, so be careful how time lines are presented and what they mean.

I have a annuity superannuation, (with State Plus), that we have to take a certain percentage out each month (this helps with my pension but if we take out too much it reduces the annuity too much). During the GFC they reduced the mandatory amount that was taken out each month. I have not heard anything about them reducing the monthly reduction yet? I thought we should have heard something by now.

If only I had some cash!

What is this thing of which you speak??

Courtesy of an ABC story, I can supplement the DOW and S&P500 data I previously posted with the ASX. 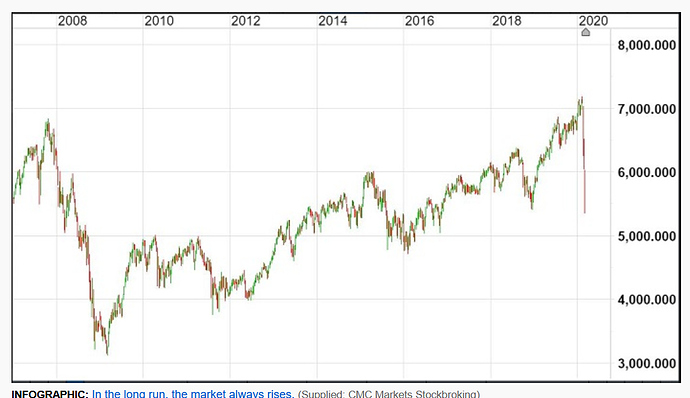 The coronavirus will likely have a finite life, but the damage it does to the share market and the economy will take time to work through, writes David Taylor.

Just checked my super, balance now down over 15% in the past few weeks, and since I’m in pre-retirement/unemployed and currently using it for living expenses, it is certainly a worry. Nothing much I can do other than sit it out though.

Clearly I should have cashed it in in January and bought a few kg of Gold!

Got questions about COVID-19 and your super / insurance through super? We would love to hear them - send your questions through to ebarz@choice.com.au.

Nothing much I can do other than sit it out though.

The fragility of market economies and the share markets and over exuberance of investors, and especially those who convinced themselves that what goes up will always keep going up with nary a serious correction, has been laid bare. The difference between this crash and others is that this one has considerable human content ‘driving’ the problem, whereas the others were mainly financially driven.

My expectation is that within a year of a vaccine being widely available the markets and thus super will stabilise but for those who ‘sat pat’ it will be a few years before pre-Covid19 parity might be reached again. Those who need to sell in the near and even mid-term will be the losers and those who can buy in with ‘new money’ or ‘excess funds’ will handsomely profit in the near term and beyond. It is how it has always been …

A way out would be that since our illustrious governments can pass retrospective laws, if folks in your situation could make a retrospective withdrawal with 2 January valuations

I do find it concerning that my current and future finances depend on the levels of fear and greed of investors unknown.

Yes, a retrospective withdrawal would be handy!

If 60 or over you have reached past the point of compulsory preservation so you should be able to remove your money from the fund. Problem then becomes where to put the funds. Banks provide little or no return, the share market/Futures trading and similar are fraught with risk.

Annuities are a same risk product as Super funds.

The thing here is that no or little return but with some security by putting it in a bank account rather than losing more of your investment in Super is possibly the safest choice to make. A Financial Adviser is the best one to get advice from, as my thoughts are just that ie thoughts. Do you know a good ethical one? Or ask a FIS person in Centrelink for their advice, they can’t recommend particular products but may be able to give you advice about how different options might affect your Centrelink eligibility and affect on payments.

Given how much the balance has fallen (and I have not bothered to look for quite a while now, but no doubt it is worse now), I think just riding it out is the best policy now, drawing as little as I can. I have taken a bit out over the past 12 months, since I turned 60, but would rather keep reliance on it to a minimum for a while longer, as pension isn’t available for another 6 years.
I remember a work colleague once saying that he thought superannuation was a waste of money, and he didn’t really expect to get anywhere near as much out of it as he had put in. Seems he was pretty close to the mark!

Retaining it in the fund is costing you more it would seem. It isn’t that you are drawing it out to spend it so it is still savings when you withdraw it to put in a savings/fixed term/online investment account eg CBA’s NetBank Saver or similar account. But let us think on what if another 15% or more is lost from your fund…So at least a 30% decrease in the value of your fund ie like you had withdrawn 30% and thrown it into the wind…no benefit to you. Even putting it into an account that pays no interest you only lose inflation value on your money (perhaps 3% or so at current CPI rates)…27% or so better off by withdrawing from the Super. Getting a good Financial Adviser’s opinion I think would be very worthwhile.

No doubt the tax I would have to pay on a large withdrawal would change the calculations somewhat.

Assuming things start to pick up in a year or 3, i expect the value will increase rather more than if in a bank, i suspect low interest rates are here for quite a while.

You could set up a SMSF account with the bank and rollover into it and when things improve roll it back into a new Super fund possibly?? Why I suggest talking to a FA re what to do. Tax would be no more than 15% which is the tax rate for super and your contributions would not be counted in that calculation. Rolling into a SMSF however would not be taxed.

The worst thing one can do is a knee-jerk reaction when the crash may have bottomed out. Is it bottomed yet? Only time will tell.

Reality of previous crashes is that once recovery starts the funds are in the hands of professional managers who are expected to know their business (excepting from those self interested companies called out by the RC and maybe a few others). Doing it yourself and putting it an interest bearing account? 0.25% or maybe even 2% after bonuses? The fund could recover (or lose) that amount in minutes.

Moving money after the loss to preserve what is left is almost always a bad financial decision although it may provide psychological comfort. Re an SMSF? Unless one has significant funds and the ability to do winning hands-on management it has been shown to be less successful than an industry fund. The SMSF dilemma: would you be better off with a professional fund manager?

The debate rages on whether self-managed superannuation fund (SMSF) investors would be better off handing over their savings to professional fund managers.