The cost of these tablets on prescription in Australia is about $10 each. I notice some pharmaceutical companies in India are offering them for about 40 cents a tablet. Has anyone had experience with this please?

I notice some pharmaceutical companies in India are offering them for about 40 cents a tablet.

One has to be very careful comparing Australia’s pharmaceutical prices, especially to those in many Asian countries…as fradulent or fake medicines are rampant in many countries. These medicines look the same, are packaged in a similar way, marked as having the active ingredients (which they don’t have) and are sold to the unexpecting. Some of these medicines also can be very dangerous, bot only because they don’t treat the underlying ailment, but they have also been known to contain harmful ingredients.

Here is the answer Choice gave in August 2016 to the question of buying medicine from overseas:

Do you shop online? Shopping

Hi @shorty2012, CHOICE looked into saving money on prescription medication recently. We note the The Therapeutic Goods Administration (TGA) warns that medicine bought from overseas may not meet the same safety, quality or efficacy standards as ones bought in Australia. For this reason, we don’t recommend sourcing cheap medication from overseas. Have you had a look at our cost-saving tips in the article above? We’d be interested to hear if any of these were useful for you.

often one will get potentially a very dangerous placebo

With deference to Choice as well as conservatism, many third world purveyors of medications are owned by multinationals and large conglomerates that have as good a reputation for quality, honesty, and reliability as any.

Recent actions in India are highlighted in this article.

As for quality of legitimate medicines made in India? Not exactly unbiased but factual anyway.

It is possible to save money on certain scripts and OTC medicines, but one must be familiar with the foreign country and its businesses and its government oversights.

For prescription medicines one should need a script acceptable to the government in the country of supply. That may not be one written by an Australian doctor. A vendor that does not require a prescription should be suspect of peddling questionable counterfeits.

I remember a current affair program I saw some years ago regarding shonky medications from India.

I don’t recall if it was Four Corners or 60 Minutes but it highlighted both the problems with false or dangerous “medications” and “medications” which did not have a sufficient quantity of the active ingredient, in particular, antibiotics.

There were valid concerns that not only would these shonky antibiotics not treat patients correctly but also increase the risks of developing antibiotic resistant superbugs.

During one segment when the reporting crew were walking in some backstreet, a pile of timber “accidently” fell from several stories above which narrowly missed them.

Cialis is a prescription only medication in Australia.

Can I import a medicine for personal use?

Provided all appropriate rules are followed, many medicines can be imported for personal use under the Personal Importation Scheme.

There were valid concerns

Absolutely @fred123. As I wrote as a counterpoint, those who ‘know the deal’, eg how ‘it’ works in another country, who and how to trust as a legitimate business, oversights, and so on can do. Others should not even think about it.

many third world purveyors of medications are owned by multinationals and large conglomerates that have as good a reputation for quality, honesty, and reliability as any.

That is true, but if one is searching online for a particular medicine, how would one know:

There are many examples of medicines which are marketed (advertised in spam emails, marketed through social media advertisements or found by internet searches) which have duped those thinking they could save money by fulling a prescription or self diagnose their own conditions, and have bought sham products. There are also many warnings (e.g UK NHS, ACCC, FDA etc) about risks of buying online medicines, especially from foreign countries.

Unless one knows with absolute certainty that the products they are buying are genuine (which is possibly impossible if one is buying from another country where standards, controls and enforcement are less rigorous than Australia), then there is a high risk that the medicines purchased may not be the real deal.

At least the telco’s have put a stop to the formerly endless emails from charlatans offering opiods including oxycodone, ED medications, and numerous other prescription only items at “bargain” prices.

No perscriptions needed. No worries.

if one is searching online for a particular medicine, how would one know:

As I wrote as a counterpoint, those who ‘know the deal’, eg how ‘it’ works in another country, who and how to trust as a legitimate business, oversights, and so on can do it.

An individual from or who ‘knows the deal’ in that country (one time resident, frequent visitor, friend from…) would reasonably know the genuine from the risky to the shonkies.

Others should not even think about it.

Easy for me to say, we can afford to purchase local stock - can online deliveries be a trusted product? We’ve bought OTC meds when travelling and been amazed at how different they perform, every time.
I’m naive, I admit that, but trust Aus regs to deliver a standard for meds. Please that this this standard is maintained.

In Beijing you can buy Viagra and Cialis over the counter from Chemist Shops. From memory, about 5RNB each which is about A$1.

Thanks everyone for responding to this topic. The consensus seems to be that buying such items from overseas countries is distinctly risky. Unfortunately, the $10 per pill cost remains extortionate.

Yet it is less than in the US - note this is in $USD. The 10mg is pretty special! 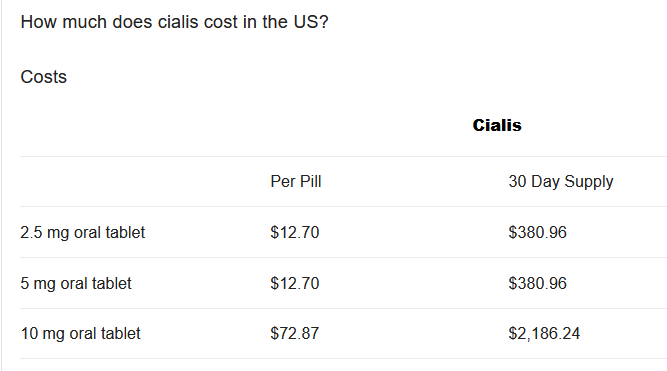 Americans with health insurance may or may not have it covered partially or at all, or have annual excesses they must meet before anything is covered.

Why are we so interested in saving a few bucks by risking our health on dubious medicines?. Our PBS system makes most medicines affordable especially for those of us on a pension. I agree that the cost of $10 per pill is high but I would still rather pay that then risk my health.

For more than one reason.

There are apparently specific risks with usage that a qualified Medical Practitioner needs to assess on an individual basis. A DPMQ ($502.30 for a pack of 56) reflects the Govt cost when prescribed on the PBS.

Cialis (Tadalafil is the generic name), is also available subsidised on the PBS, subject to approval it’s necessary medically to treat the diagnosed condition.

One source suggests that no more than one 20mg strength tablet should be taken in a 36-48hr period. A lower dosage may be medically recommended. A pack of 56 is going to last a long time.

I never said it was risky. I said they were approx $1.00 per pill, and they worked fine. I am only disappointed that I did not purchase more.

On a slightly different note regarding pill pricing irregularities, I have just ordered another pack of Nexgard Spectra for our little dog from Budget Pet Warehouse who display these prices for the 4 different pack sizes.

Actually it’s only $30 for 8 generic tablets at chemist warehouse by Sandoz - probably made in India.

My friend has been using an Indian version for about 15 years. Whether or not psychological- they do the job it advertised at about $3 per tablet

Whilst the 6 pack is much better value than the 3 pack, and the 12 pack is slightly better value

Thanks to Nexgard Spectra - Go little doggie!
At nearly $12 a dose they need to be good.

Thanks for that. I’ve checked Chemist Warehouse on line and their price is $29.99 for 8 Sandoz Tadalafil (Cialis) tablets. A lot better!!!