From time to time we see posts here asking for Choice to conduct reviews that have not been done or to do them in more detail. In some cases the reason that Choice hasn’t reviewed the category is that it was too ambitious, that Choice lacked the technical ability or that it would be too costly for a non profit organisation.

A recent example is the review of computer monitors where Choice provided a very simplified review that was generally considered not very valuable. The explanation was lack of resources made more difficult by COVID.

Sometimes Choice uses or refers to reviews done by similar consumer organisations in other countries. I can’t bring one to mind but I recall this has happened. So it seems Choice has evaluated some external reviewers and is prepared to recommend them. Would it be possible for this idea to be extended?

There are review organisations around the world that are not non-profit and so are not ‘sister’ organisations that still do good work. Some of these are standard references for technical reviews such as computer components or photographic equipment. It is hard to know for sure what goes on behind the scenes but such reviewers trade on being impartial and are often accepted as such except for some individuals who have an axe to grind.

My proposition is that for specialised and technical categories that cannot be dealt with locally that Choice review the reviewers. This would be a summary of the major providers and an assessment of the scope that each attempts, a rating of their general competence and if they live up to their claim of impartiality. The point of this is to avoid every consumer having to go through the same process themselves. There may need to be disclaimers that not being able to see under the hood Choice cannot certify their impartiality. However, it may be possible to get a look-see if such reviewers are prepared to let Choice in to study their processes and expertise.

I realise that this could be seen as Choice endorsing a for profit organisation but in a sense that happens each time products get favourable reviews. As with the individual products the reviewers don’t get favourable mention for nothing but have to earn it.

Hi @syncretic, thanks for the suggestion. It’s true that sometimes we may utilise results from other consumer organisations, or share expertise/costs. One arrangement for example is with Consumer NZ, when the products and markets are similar. We appreciate the suggestions to expand and develop the approach here, I’ll make it so they receive some attention.

What about something like a searchable wiki of trusted alternative sources if information is not available from Choice.

The contents might be a listing of organisations with - country; consumer org or commercial enterprise; area of expertise; topics they cover; and their web address.

What about something like a searchable wiki of trusted alternative sources

Considering business models that could be problematic. Without regard to market and product differences, once one has a list of worldwide sources and resources why would anyone need an ongoing subscription excepting it was the right thing to do? Partner organisations yes, but ‘all’ maybe not?

once one has a list of worldwide sources and resources why would anyone need an ongoing subscription excepting it was the right thing to do?

An ongoing subscription to what? I imagine this as member only material within Choice.

An ongoing subscription to what? I imagine this as member only material withing Choice.

A business consideration is if the member stores the list of resources they might decide they no longer need a subscription. Not being a Choice business manager I cannot make a decision, just noting it could be a valid reason why they might not be amenable.

Perhaps Choice needs to reconsider the priorities of it’s Purpose and Objectives, notably 2.2.1? 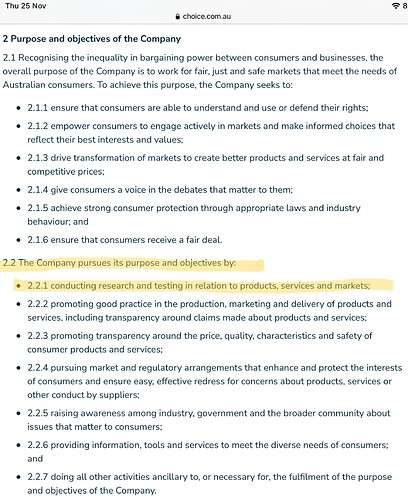 The ACA-Choice was founded on a reputation for independent reviews of everyday consumer products. Does more consideration need to be given to:

Does Choice have the capacity to provide a comprehensive product review resource?
I’ll propose that Choice needs to reassess the priority it places on the first listed action 2.2.1 and either:

Given the rapid rate of change of the consumer market place, should the greater emphasis be on equipping consumers with the tools required to adapt and stay ahead?

In respect of business, business representative organisations, regulatory authorities and government should Choice seek greater representation and more direct involvement in advance of decisions that affect consumers? This is not a criticism of Choice. There are however examples where other organisations have representation, if only by invitation. IE Government pretence that consumers are consulted, if I’m permitted some cynicism.

A business consideration is if the member stores the list of resources they might decide they no longer need a subscription.

That applies to internally conducted reviews, the value of such things is time limited and they need to be updated from time to time.