We received this Shonky submission via Facebook, spotted on sale at Red Dollar.

What do you think, harmless fun or a poor example for children’s play time? 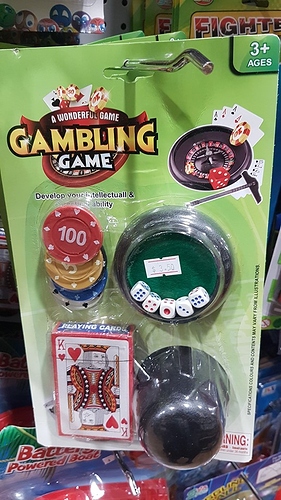 Shonky for sure! Especially the spelling of “intellectuall”!

Definitely not good to be getting 3yo children into this.

Not something any three year old we know would grasp, or find exciting.

Is the 3+ age group aimed at a purchasing decision by children who can’t read or write at that age, or the apparent age of the responsible parents?

Not something any parent should be purchasing for young children.

Notes:
Educationally the two games we learnt the most from at an early age were:

monopoly - in life there are more loosers than winners,

and a Roulette (wheel) - you can’t beat the bank, everyone looses.

Monopoly is the better of the two as it also has hidden lessons in sustainability and the finite nature of resources.

For me it was cards. You learn that life has a random element and that you can’t always win but if you polish your skill and try hard you can improve the odds in your favour.

Not quite as high in the shonky stakes as the RSL club in Qld that provides children’s entertainment by lending them personal screen ‘devices’ with pretend pokie games.
Youngsters should be gambolling, not gambling. But card and dice games have their merits for somewhat older children, especially the very older like me. Pre-TV and internet that’s how we kept our brains functioning and amused and learned how to take defeat gracefully.

it’s not the worst kids toy I’ve seen for sale.
My son is 5, but because gambling is so prevalent in our society it’s a conversation we’ve already started to have with him (mostly because the little darling asks questions about EVERYTHING and is never satisfied with the easy answer…). Thankfully he’s pretty woke for his age, and he’s developing a good understanding.
Would this normalise gambling for kids, or is it a harmless toy? I guess that’d depend on the attitude of the parents. In our house it would be a harmless toy, in another house where the parents weren’t having that kind of conversation maybe not.
It’s not really necessary though, is it!!

Would this normalise gambling for kids, or is it a harmless toy?

Not everyone gambles. Some of us apparently are more (personality) predisposed to gambling addiction than others. Good parenting may not change that if you believe the shrinks?

Alternately being mathematically inclined, analytically obsessive, and prone to procrastinating might be good traits to be born with in this instance.

The current bombardment of gambling adds in prime time TV from 6:30pm (our household), appears to encourage normalisation.

Some adds that ran a little way back also appeared to send the message that the male orientated targets would be socially unacceptable if they did not participate.

If it is right to give little girls mini shopping trolleys to push around the supermarket to prepare them for their role in adult life it is right to train little boys to use gambling toys and apps - and guns of course.

The same argument was used fir the cigarette/cigar lollies in the 1980s…with a more recent ban in the last decade in some states. I have noticed that the same products are sold, albeit with a different name to try and ‘break’ the cigarette association…so in effect the ban has not been overly successful.

It should be banned as children in their impressionable age should not be exposed to gambling thinking it is fun thing to do. Gambling is financially dangerous and a blight on modern society and the games teach children how to gamble…

Such games provide responsible parents with tools which could be used to explain how gambling works, its pitfalls and probabilities of success (namely, the odds are stacked against the punter).

I am mixed minds, but hope that if it is bought it is done so by responsible parents and not those who wish to encourage their children to gamble (either in play or in reality).