An article regarding charity donation bins being used as garbage dumps. 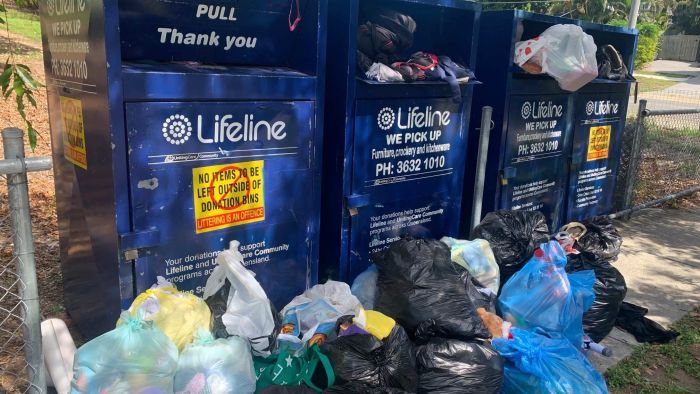 'Worse than we thought': Surge in illegal dumping prompts charities to ask...

My wife and I have been strong supporters of Lifeline for many years and we both did voluntary work at the local distribution centre until our health problems caused us to have to stop.

Whilst working there, every day their tip truck would be filled with rubbish not fit for sale and they had to pay the Council dumping fees to dispose of it.

That did not include the piles of garbage that grubs would dump outside the charity bins which used to be located in shopping centres across the Cairns region which now appear to have all been removed.

And then there where the grubs who stole items from inside or outside the charity bins. On one occassion around 20 years ago, I witnessed two extremely suspicious persons pull up in the undercover carpark at our local shopping centre, and whilst one proceeded to go inside the centre, the other proceeded to go to the Lifeline charity bin in the far corner of the carpark and rifle throught the items on the ground outside it, and take some of them.

His grub mate returned a little later empty handed after his “shopping excursion” and they drove off following which I called the local police, way back when they had a local number that was actually answered, and gave them a full description of what I had just witnessed.

Surely persons who refuse to do the right thing and pay dumping fees for their rubbish could at least illegally dump it at Council premises instead of effectively stealing from charities.

This is terrible and costs these charities significant amounts of money to dispose of others waste … when the monies should be used to help others. Unfortunately we live in an age where some individuals don’t care and think that they can pass their problems onto others (whether dumping waste materials in charity bins or dumping non-recyclables into recycling bins).

We are possibly fortunate that our local St Vincent de Paul has a loading bay which one can drop off unwanted, but usable goods during normal business hours. We often take unwanted items and ask them on dropping off whether they want the goods…if they have a value and would assist SVdeP in making money for their charity organisation. Fortunately we are careful and only take things we we believe have a value to others and SVdeP has willing accepted all the items we have taken to them.

Maybe other charities should also adopt a similar approach to ensure they aren’t dumped with waste that costs them money to dispose of.

While this is very sad, it is merely an indication of where our society is headed. In large cities, there seems to be less and less community spirit, except for during our more and more frequent crises

On the other hand, some of the ‘donations’ may be deemed useable by those leaving them, but rubbish by the charity?