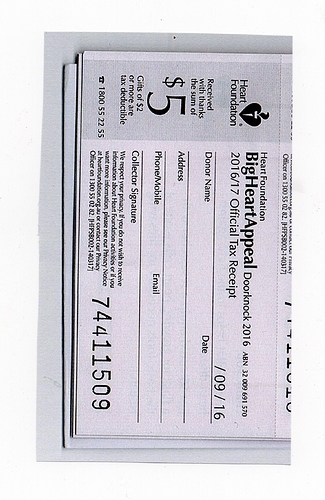 The current Heart Foundation doorknock appeal receipt asks for the donor’s name, adress, phone number and email address. This is a deliberate breach of privacy and is most likely intended to be used to badger and harass the doner in the future. It should be disallowed as a matter of public interest and protection.

Asking charities to unsubscribe or remove you from ANY mailing list, is a real chore and, often, has to go into the ‘too hard’ basket. CBM are one example.

I have the same issue here…They really ring all the time and I tell them that my donations are over for the year… AT times I really bombarded. We should take have them on a No Call List" also.

It’s the donors choice what details they give. Is this to prevent theft or to build their data base?

Even with an unlisted number, I get them ringing about once a month trying to get us to do door knocking of our neighbours on our behalf. I have asked to be removed from their call list, but doesn’t seem to work.

I wish they had to abide by the do-not-call register or have similar centralised system to opt out (it would be good if the same could be done for political advertising).

I wouldn’t lower myself to give a receipt like this without asking for these details, so I posted the doorknock pack back to the heart foundation who are doing all charities a great disservice with this offensive approach.

I agree it is very difficult to get removed. In the last 14 months I have returned at least 3 dozen mail items sent to my Mother, who died more than a year ago. These were all from charities she had not donated to for more than 4 years.
I also find it confronting to have a continual bombardment of mail from charities that I have made a specific one-off donation to. I am largely offended be the bulk of paper that is wasted that donations have paid for in both material and someone’s time.

I agree. The amount of mail that arrives from ones you have never dealt with too. So annoying that they waste donated money.

We regularly get charity calls, perhaps because we do donate across a range. But I am very sick of these calls especially at dinner time. So now when I’m asked: “is that (my name)”? I say, no, sorry, she’s out. So they promise to ring back. Just keep on doing that and they give up. It’s so counterproductive for charities to behave like this as their behaviour builds resistance to appeals.

I was told by someone who worked in the charities telephone drive, that they have a list. If the person answers in a nice way, the will get called back. Only the persons that swear and abuse get struck of the list. It is pathetic to think one has to lower oneself to such a level to be left alone from these harassing phone calls. I get about five a week. I never donate over the phone, but pick my particular charities that I like.

After making a donation to the Heart Foundation I kept receiving requests for donations and also they would include a little gift. I felt guilty if I didn’t contribute a little bit because of the expense they were going through.
The next time I received from them, I wrote back requesting to be taken off their mailing list explaining that I didn’t like the way they were spending precious money on little gifts for me and that I would make donations whenever I’d be able to. This was happening with the seeing dogs foundation also and I made the same request to them. So far I have not received any more unsolicited mail from either.
I must add that I consider both charities to be doing a wonderful job in their field but wish they would not waste so much money on unsolicited donations requests!

I think the actions by the organisation doing the collection are very misleading and deceptive. People thinking they’re helping Surf Life Saving when in fact they’re giving money to a commercial fund raising organisation.

We get lots of requests over the phone and in the mail by charities whom we’ve never donated to. With the mail ones which include gifts such as cards and address stickers, I just return to sender. I don’t even open now as I recognise the type of envelope - they often come from a PO box in Strawberry Hills, NSW.
With phone calls now, I say I donate to certain organisations and I am at my limit of donations. In the past we donated over the phone but then they rang every few months - so never again.
And then there are the door to door for certain charity weeks etc. I usually give a small amount as they don’t take your details back to their head office - if they did, I wouldn’t donate.
Some of my regular and semi regular charities use to send mail with updates and asking for money but I have contacted them all and said to send via email only - I hated the idea of all that wasted paper.

I am a disability pensioner and my charity dollar is spread out over about 5 charities that I support. What really annoys me is the fact that charities make money by selling their list of donors to other charities. These charities I have no intention of donating to then go on to call and harass me for money. This is ridiculous and creates bad feeling about those charities that I do support.

I agree. I post one return to sender asking for removal. If they continued happily put them straight into paper recycling.

The charities sector is completely ‘off the leash’ and rapidly earning a very bad name for itself. Further, the government won’t move against them because they are relying on the general public to pick up the slack after abandoning their support for most charities in recent years.Half of Australia is pre-screening calls coming in on their landline phone just to avoid their harassment.

Several years ago I donated some money to a particular project run by an overseas-focussed charity, only to receive a thank you email for a different and totally unrelated project. When I queried this with them they were so arrogant and dismissive I immediately took steps to remove myself from their lists. It still hasn’t happened, these guys are un-flushable!

I’m also tired of fielding multiple daily phone calls from charities asking for more donations or selling raffle tickets. I refuse to give out my credit card details over the phone to a voice who says they’re from “XYZ Charity.” Some of the charities I’ve never heard of and some of them have been, shall we say more than assertive, in their requests. I asked to be removed from the calling list for the Red Cross as the calls were so frequent and becoming more demanding. I was told my number would only be removed from their current campaign and that I would continue to receive calls for all their future campaigns and that I had no control over this. Seriously reconsidering my donations to some of these charities. I would also be pleased to see charities have to abide by the Do Not Call legislation.

My wife and I are retirees and consequently on limited income. We support with a monthly payment a couple of charities and each Christmas have a look at our situation and invariably send a donation to half a dozen others. During the year we get requests from ALL the aforementioned for more. These are those which come through mail and in fat envelopes filled with information about the appeal. They must cost a lot to produce and send but unfortunately they all end up in the recycling bin so I suppose that does some good. Further, we get ad hoc phone calls usually for raffle tickets for other deserving cases and we are a soft touch as we do buy some. In all, I feel we don’t do too badly but there is no way I can - or will - give more or we will find ourselves looking for support from the Smith Family, one of the charities we support.

I at 77 retired from a lifetime in the Defence Force and work part time and give about $4,000 a year to various charities but I get pretty annoyed by requests and telephone calls asking me to give more, I also get annoyed at receiving pens and other GIFTS which Ii don’t want from charities who should be spending the money on charitable acts rather than giving me stuff I don’t want or need.

The worst experience I had was from Save the Children. I arranged an automatic monthly deduction which they started harassing me to increase after one year. The final straw was when I received a letter from the CEO saying that as I hadn’t increased the amount they would go ahead and increase it themselves. And they did!! Apparently they can do this when you authorise an automatic deduction. Now they get nothing.