Using TV product codes, you can find out which year a particular model was released and then use that informaiton to unlock a bargain.

Find out how to understand the codes here:
https://www.choice.com.au/electronics-and-technology/home-entertainment/tvs-and-projectors/articles/tv-bargains-2018 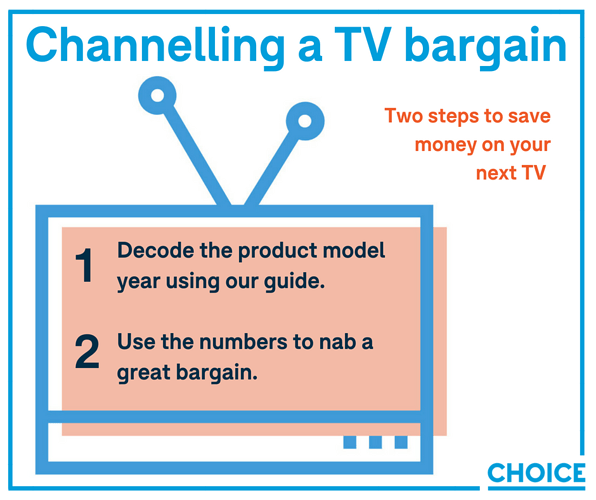 Good one from Choice. No doubt it applies to other electronic products as well. If there are it might be good start to see the product reviews by Choice include a first released date in the comparison or summary data. No doubt the major stores also get advance advice on new model releases 3-6 months ahead for marketing and purchasing commitments. Useful for more than just TV purchases. Hopefully this can save a few more of us from buying at a great discounted price only to see a new model pop up 4 weeks later with more features, new technology and an near equal or even lower rrp!

When we were recently purchasing a new mid range camera, the first sales person we spoke with did point out a particular model would soon be replaced. We used the Choice recent Choice reviews to help with a decission. A second sales assistant we spoke with seemed also to be full of knowledge. Only not so up to date re the Choice rcommended models, and certainly very coy about the age of each model since release. One model the store suggested had been released 4 years prior! Not so great given the rate of change of technology. I’ll be adding relevant feedback on the everyday Choice web site against the relevant review section when the new camera and I are better friends.

Thanks for the comments @mark_m. I’ll be sure to pass it on to our TV expert @DenisGallagher, look forward to seeing your thoughts on the camera too.

It’s is an unusual product category with all the major announcements in January, February and 90% of the product arriving anywhere between May and July depending on the brand. For example, Sony have announced another ‘2018’ model that’s not going to hit the retail stores until October. While this is technically a 2018 model you will most likely not see this one on sale before next June while some of the LG and Samsung models released in April may be part of a Christmas sales push, mixed in with a selection of 2017 models.

The Apple i_product release cycles and speculative features are keenly followed on several dedicated user web sites. The same can be said for the penultimate average consumer icon - the motor vehicle. Motoring magazines and journos are all over up coming model releases long before the current model is in run out. It’s just a little more obvious once the new model hits the yard.

It’s rare for tech to change dramatically or too much in external style and appearance between models. Except for step changes (eg the first iphone, ipod mini etc). Choice’s pickup on the TV model changes is a great one. Minor changes to the external styling and random model numbers hide what can be major upgrades to the internal electronics, speed and processing quality of the video data being received.

We can see evidence across three different models of flat screen TV purchased over the previous decade. All Sony branded. All purchased on price point as a compromise between the latest models, screen size, features, and picture quality.

I’d suggest for Choice’s reviews understanding key changes in products between model releases are equally important. Some of these such as 4K or Quad HD panels are hopefully obvious and usually demand a premium. Others such as step changes in the processing electronics are more subtle. They have made menu navigation and channel changing improvements ten fold in speed for little change in cost.

I’d happily purchase a full HD TV at a run out price over a new 4K one. We did! Because I know that we will by living in a rural area never see the benefits of 4K broadcast TV (the NBN will see to that). Alternately I’ve seen the step change in reduced power consumption, faster menu operation, brighter sharper screens and great WIFI options arrive with each new model for new model prices similar to the sell outs on the previous often very inferior products. I’m sure Choice’s advice on grabbing a bargain will point out the key consumer features that differentiate the new and older models.

Digital cameras, digital computing devices, mobile phones etc all use the same types of technology and in many instances cost as much as a TV if not more with even greater consumer turnover. Hopefully for Choice there is an opportunity in the near future to get inside the cycles of some of these other products. For many just knowing a product was released (column in the Choice review table) over 12 moths prior should be enough to ensure the sales reps at your favourite telco are not just off loading another dog.

We’ve updated this article in case anyone is thinking of grabbing a TV in the end of year sales.