Can anyone provide caravan recommendations?

Great article but without naming the brands, how does a punter entering the market for a van know whether the manufacturer is reputable or dodgy?

Hi @petengill, I’ve moved your comment to a new thread in the hope that @Travel-Campaigner and Community members might be able to share their experiences. A key recommendation is to also seek out an independent expert for some advice once you are narrowing in and have a better understanding of the product.

If anyone has a reference for an expert or can share their process, please add to this thread.

Hi Bendan, when your looking at a new the best time is at shows as better deals are given more items are added to caravans at a saving in price. May I say take booklets on the caravans you like and know what you want to use it for off road, weight is a big issue like the caravan weight the the load young can carry you have to look at this very carefully, many manufacturer say it but the compliance plates contributed it in some cases your payloads are two or three hundred kilos find out what your water tanks take and these days you need a dirty water tank depending where you want to camp, look at what you suspension can carry as many dealers give fales info. Have to know what your want the caravan for how long you are going to travel in it if you want a shower and toilet combined or seperate as it all add to weight if it’s going to be a pop top or a full caravan, this adds to fuel savings, solar, batteries, tyre size, a lot of sales persons offer the world but if not written into the contracts you get a lemon and not what your paying for take someone with you as a witness take photo of what you see and make sure all is documented and a date month of delivery is written in of all you wanted.
Al

Thanks @bigalan7, appreciate the tips

If you are looking for a exceptionally good and well equiped camper trailer with real off road capabilities my son swears by T-Van. They are quite expensive when new but really hold there value and the company has been making them for a long time with good reputation in the 4wd circles so they must be doing something right.

You can also join some Facebook groups which detail some of the brands to avoid. Search for “Lemon Caravans” or “Shonky Caravan Builders”…

Hi, to recommend a caravan what you need to know is; what you want it for and how long your’re going to take it away for and where. Full height caravans are great with an en-suite but theyr’e a lot of weight, wind drag and beware of the true weight as to what the plate states. 9 times out of ten it isn’t correct. You have take into consideration where you are going to travel, aerodynamics, the fuel cost. Are you going to free camp and save money or stay at caravan parks? Are you going to travel long hours? Pop tops have the advantage of fuel savings, less wind drag and depending on single or twin axel. First work out what you are going to use it for either travel alone, as a couple or with friends staying away for long periods. You need a caravan to carry your load and there are a lot out there that tell you one thing and sell you something else. Get everything documented in words you understand. If you don’t understand it get them to write it down if they won’t go somewhere else. There are a lot of shonky operators so take photos of what you see and read up on what you want. Look at the quality and the things like a generator, out side/inside cooking. This also adds weight. Don’t believe what you are told till you’ve seen it and get it in writing. Weight is a big thing and the allowance of the weight that can be carried is very important. Compliance plates on the Caravan are never a true indication because of extras you put in there and add to the Caravan. If you have many ask questions write them down.

An article regarding caravan and motorhome scammers.

Carolyn just wanted to hit the road after months of lockdown. Instead she was...

With international borders closed and uncertainty about interstate travel, sales of caravans and motorhomes have been booming in Australia. But consumer watchdogs believe "increasingly good" scammers are taking advantage of the demand.

Looks like my reply on Fred’s original thread has been lost in the ether. I did say… there are lots of other big ticket items also being put up as bait, and theres just no stopping the psychopaths.

I have move this to the caravan recommendations thread, because this is where people will go to find out what to buy.

This is a salutary lesson in where not to buy a caravan or motorhome.

It should also be noted that the people behind this scam are also suspected of being behind other scams involving large ticket items. “Over the past year we’ve detected caravans, motorhomes, tractors, farming equipment generally, construction equipment, motorbikes, boats,” acting deputy commissioner Ann Holland from NT Consumer Affairs said. Ms Holland said while the watchdog could not definitively prove it, they suspected it was a group of scammers based overseas creating multiple sites.

This is a salutary lesson in where not to buy a caravan or motorhome.

For any major purchases, also do an internet search of any new unknown companies to see if anyone (e.g. @fred123 or a government agency), has reported it as a scam/sham company only operating to steal one’s hard earned money. And never give over any money when buying a product without it been seen in person. Never rely on photos or word of others.

Only pay deposits or payment if the company is well known and reputable (e.g. a major retail chain) and once the product has been inspected to determine it is legitimate. An even for known legitimate companies, only pay only using methods where payment can be recouped if necessary (such as credit cards or Paypal). Never pay by bank transfer, gift cards or cold hard cash. Cash can be used if you are with the item you plan to buy, at the time of purchase.

Whilst out and about today, I saw this massive outfit. 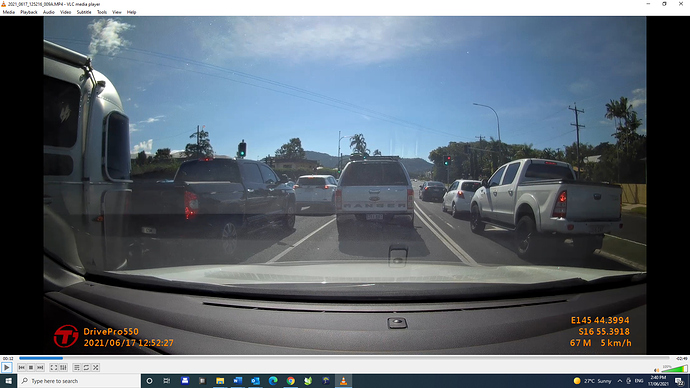 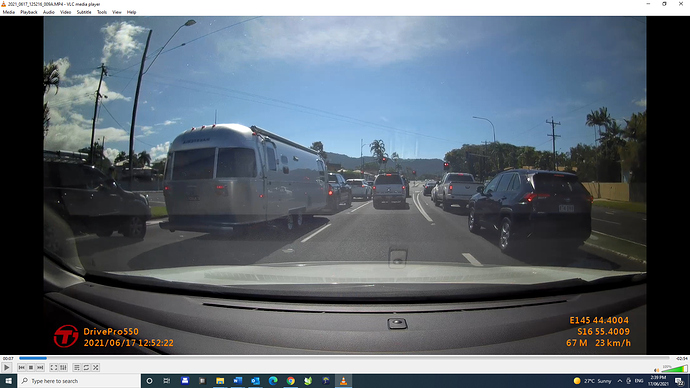 For a moment, I thought it was a road train.

Now that is what I would call serious caravaning.

I also spotted this Ford F250 Super Duty Dual Cab Ute making sure that Ford was not upstaged by Toyota.

Sold in Australia for around AUD $200,000. Should cover shipping, RWD conversion, taxes and GST quite nicely.

Official 2021 Toyota Tundra site. Find a new Toyota Tundra at a Toyota dealership near you, or build & price your own Tundra online today.

relatively cheap in the US in comparison to over AUD

You could just wait a little longer and be the first on the block to go electric. Ford's take on an all-electric truck will be shockingly affordable, priced from around $40,000 before incentives. Can it change the EV game?

From around US$40,000 before generous rebates from the US Fed and Stare Govts. Caravan not included.

It would be interesting to hear from those who are avid caravaners and read US publications often.
Are Caravans in the USA significantly cheaper than Australia? Does the US market consumer suffer similar levels of poor build and consumer complaints as Australians.

If one includes differences in taxes and exchange rates (assuming wholesale price the same in both countries, dealer delivery margins are the same and ignoring shipping), this would be starting around $72000+ in Australia.

this would be starting around $72000+ in Australia.

before generous rebates from the US Fed and Stare Govts

Even more affordable in the US.

this would be starting around $72000+ in Australia.

Perhaps the maths would be useful, but it’s not about caravans. I’d make the fair price of the F150 Lightning in Oz AU$48,000 rounded based on comparison of the rrp of Toyota’s made in the USA vs those imported to Australia.

Even if you look only at exchange rates, US40k = AUD53k

The US tax rates on vehicles is less than Australia, and the difference would add another $3-6k+. Add in Australian compliance and converting to RHD and this can be another $10k+ (I recall reading somewhere for another vehicle it was in the order of $20k-40k+ if it wasn’t a factory conversion - which it won’t be as Ford has ruled out RHD factory conversions for the vehicle).

It is now over the luxury car tax threshold…so $ even more.

Being likely to be a special or limited import, this also causes a premium

$72k was conservative, and possibly realistically would be substantially more if one adds in shipping, rego and Australian dealer charges.

Add in Australian compliance and converting to RHD

Which assumes an Aussie import of a USA private sale vehicle.

Alternately if Ford ran a batch of RHD through a factory for export?

In Australia the current Toyota Camry Hybrid Ascent just AU$33,500. Plus what ever the dealer adds less discounts.

The ratio is approx 1.0 US car dollars equals 1.2 Aussie car dollars. Reality may be different, but any thing else says we are being robbed blind. Whether it’s by our governments, car importers, distributors or dealer networks.

As the original article linked by @Fred123 suggested the base model F150 Lightning in the USA is cost competitive.

The difference between our two evaluations. It’s a demonstration of how our government decisions are ensuring ICE remains the most viable option. Not a subsidy for a hydrocarbon fuelled future. More a protection racket.

Another comparison might be the cost of a Kona Electric in the USA vs Oz. It suggests a fair price for the Ford in Australia is somewhere in the middle of our two numbers (AU$60) with the Kona priced similar in the USA to that suggested for the base model F150 Lightning.

There are luxury car tax exemptions for commercial vehicles, depending on …
The Kona depending on spec is not so lucky!

Apologies to all caravaners. Perhaps the option of a reasonably priced EV tow vehicle appeals.

P.S.
Does this discussion really belong in this topic @phb ?

Alternately if Ford ran a batch of RHD through a factory for export?

Nope, Ford have ruled out a RHD factor conversion for the F150 Lightning. Any conversion will be expensive as outlined in the previous post.

You can’t compare US made sedans (sold in the US) with Australian made sedans (exported to Australia). If the F150 comes to Australia, taxes, exchange rate etc become relevant as it would be an import of an US vehicle.

If one assumes that a factory RHD conversion vehicle was made, comparing another US ute markup (RAM), the F150 Lightning would start around $98K.

There is no more add as there is no way a RHD F150 Lighting will be sub-$50K in Australia. It is more likely to be double this if the RAM calculation is used and Ford make a RHD version (which they have ruled out).

I just did. It’s all hypothetical, and not to be taken too literally.

What ever the price difference suggested the higher the estimated retail price in Australia, the greater the rip off.

It continues to highlight why so many OS companies want a piece of our uncompetitive over priced consumer market.

The reality is in an internationally competitive market the price of a vehicle in Australia should be comparable to that of other similar nations. It does not matter which way we dress it up. We’re being dudded.