Native brush turkeys are attacking and forcefully trying to mate with domestic hens and there is very little that can be done to stop them.

I was very surprised at this claim by an ecology professor.

“He said they were the only birds to emerge from their shells that do not receive support from parents.”

Perhaps he needs to research Australia’s other 2 megapodes, the Orange Footed Scrub Fowl and the Malleefowl.

The malleefowl (Leipoa ocellata) is a stocky ground-dwelling Australian bird about the size of a domestic chicken (to which it is distantly related). It is notable for the large nesting mounds constructed by the males and lack of parental care after the chicks hatch. It is the only living representative of the genus Leipoa, though the extinct giant malleefowl was a close relative. Malleefowl are shy, wary, solitary birds that usually fly only to escape danger or reach a tree to roost in. Altho...

So the male turkeys get violent with domestic hens; well roosters get violent with hens. Hens have an instinct to submit to anything large and threatening that approaches them. They assume a crouching posture and wait to be inseminated. Congress with a rooster is short and rough and involves riding while wearing spurs, neck pecking and feather pulling.

Submission is not limited to roosters, it can be to humans or in my case a 300 kg mower. I have tried telling them this is not what evolution had in mind for their contribution to the future of the race but they take no notice.

I do hope that hens are not being injured by the turkeys but it is also possible that some backyard hen owners who have never seen a rooster in action (they are forbidden in many places) might be getting alarmed over normal behaviour. There is almost no chance of actual breeding and zero chance of fertile eggs but that will not change hen behaviour.

Perhaps he needs to research Australia’s other 2 megapodes, the Orange Footed Scrub Fowl and the Malleefowl.

Port Douglas or any number of North Qld coast line all the way to the Cape there are plenty of the Orange Footed SF. Hopefully on the next field trip he is more familiar with their call than breeding habits.

On a Professorial income perhaps not, or is it just poor reporting?

So the male turkeys get violent with domestic hens;

Equally aggressive with other males. Territory and a harem equals success. Survival rate of the offspring is not high apparently. Our near to the kitchen mound attracts all sorts. Lace monitors, pythons, feral cats, the fox, and lots of girls for Mr Turkey.

plenty of the Orange Footed SF

Years ago i was given an old bushman’s recipe for cooking Orange Footed Scrub Fowl.

1.Clean and pluck the fowl.
2.Place fowl in a camp oven with a large rock and water.
3.Boil over high heat until the rock is soft.
4.When the rock is soft, discard the fowl and eat the rock.

PS. We have plenty of both Brush Turkeys and Scrub Fowl in the rainforest covered creek outside our back fence.

An answer to them that may help is to place mirrors that reflect their image back at them. They think it is a rival and posture until they think they can’t win and they move off. Not perfect but it will discourage most of them, they will posture at the mirror before going anywhere near the hens. It also can help dissuade them from building their nests in your yard.

plenty of both Brush Turkeys and Scrub Fowl in the rainforest covered creek outside our back fence.

Canberra of the north, although your turkeys are around for more than an occasional few weeks each year?

Ours are media junkies and like to show off for the cat-cam. The girls tend to only show up when it’s party time. They have their own bachelorette pads most of the year. I think our guy is a bit of a softie, he Sometimes there are up to four keeping him company. 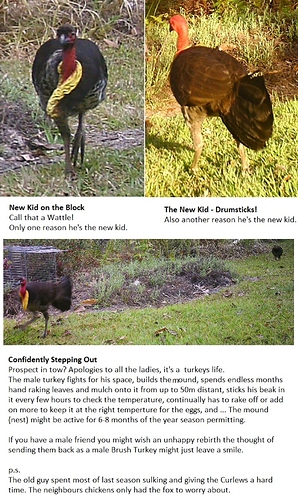 While the mainland has brush turkeys, the birds in Tassie which are a nuisance to gardeners are the common black birds. Gardeners find that when mulch is placed in the garden, it is a fight with the common black birds to keep it there. They are ground foragers and will throw much around 0.5m behind then when looking for things to eat. They never seem to throw if back into the garden, but onto adjacent lawns or pathways.

This results in regular raking and sweeping to keep the garden neat and tidy.

Perhaps a meal option for your guests.

“Four and Twenty blackbirds baked in a pie”.

That should quickly reduce the problem.

Perhaps a meal option for your guests.

“Four and Twenty blackbirds baked in a pie”.

Traditional to boot, and so very in tune with the background of the 19th century English immigrants to Tassie.

Do not try this at home!
Doubtless being Australian Fauna they are protected from such exploitation and physical harm.

Common blackbird is an introduced species and sits outside the protections afforded to native fauna…however, if one decides to make blackbird pie, they have to be treated humanely in the process to give up their meat.

I was not previously aware that these blackbirds were yet another species of vermin introduced to Australia by European stupidity.

Definitely a great reason to have them on your guests’ menu in keeping with the traditional UK sounding name of your establishment.

Who knows. National Pies may end up paying you royalties for your recipe.

I’d prefer the snails, I think.

I’d prefer the snails, I think.

I would prefer neither, but are you suggesting eating protected native snails, or is the only native snail Austpost?

My father used to have about a dozen chooks that were visited regularly by a peacock. He had to put a chicken-wire “roof” on the pen.

My neighbour’s hen died as a result of a brush turkeys attentions.

but are you suggesting eating protected native snails,

I think we have that covered.

Can you eat common garden snails?

Having moved recently to Tassie, I have noticed an abundance of common garden snails. They are everywhere and anywhere where they are protected from the elements.

I prefer mine to be cultivated, that way there is less risk they have consumed something they should not have.

My neighbour’s hen died as a result of a brush turkeys attentions.

It’s unfortunate and saddening to hear. If you are in a built up urban environment the turkeys have proven highly adaptable. Most local councils have policies on managing them if they are a problem. Usually only a phone call away if there is a problem.

In more rural areas keeping chooks is akin to opening a fast food take away for the local feral animals and depleated native species. Our rural neighbours who are successful with chooks have substantial pens and lock the birds up at night. Mostly it’s foxes and wild dogs that take out the chooks around here. I’ve another further away who has a feral cat the size of a lion (err, not quite but can be over 10kg) that is also keen on fresh chicken.

The local snakes prefer the mice and rats the chooks attract, while the eggs are a favourite of the pythons. Some prefer to have a cat or two to keep the mice etc at bay. Unfortunately cats when treated or used in that way tend not to understand this and indiscriminately kill wildlife in large numbers. Which is counter to why many choose the ‘tree change” to hear the birds in the morning and have a few chooks.

I prefer mine to be cultivated, that way there is less risk they have consumed something they should not have.

Apparently, purging of the snails, a lengthy process, takes care of eliminating anything unsavoury that might have been ingested by them?

Apparently, purging of the snails, a lengthy process

Yes, 7 days on a special diet such as corn meal.

Bran is great to do the purge.