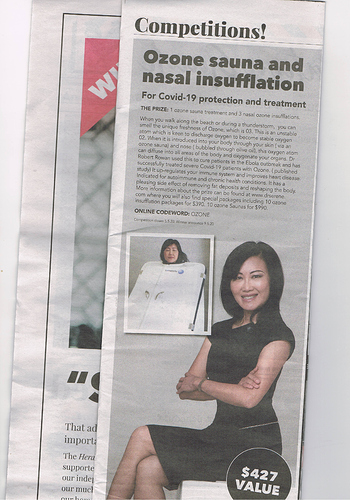 May be worth a mention/complaint to the Therapeutic Goods Administration:
https://www.tga.gov.au/media-release/tga-issues-warning-about-illegal-advertising-relating-covid-19

The supposed expert’s name is misspelt. It should be Dr. Robert J. Rowen

The Wikipedia article on ozone therapy makes interesting reading. Among other things:
" In April 2016, the FDA prohibited the medical use of ozone, “In any medical condition for which there is no proof of safety and effectiveness”, stating “Ozone is a toxic gas with no known useful medical application in specific, adjunctive, or preventive therapy. In order for ozone to be effective as a germicide, it must be present in a concentration far greater than that which can be safely tolerated by man and animals.”"

For Covid-19 protection and treatment THE PRIZE: 1 ozone sauna treatment and 3 nasal ozone insufflations. When you walk along the beach or during a thunderstorm,  you can smell the unique freshness…

and to a conspiracy type US site –

and some words about Dr.Robert J Rowen in a blog, not exactly rigorous research, but

Robert J. Rowen is apparently an MD, but probably one you should stay clear. Rowen is also an “ integrative physician ”, and his probably...

He also publishes on Dr Mercola’s site to make the point. He is featured on numerous ‘alternative medicine’ type sites including accolades from admiring customers.

Is Dr Mercola a quack?

Joseph Mercola , who is widely considered to be a quack , and whose health “advice” has been the target of several warning letters from the U.S. Food and Drug Administration.Mar 19, 2015

For those who have not had a little taste of ozone it is NOT the fresh smell of a sea breeze. Ozone is caustic and irritating, it smells like the worst overdose of pool chlorine you have ever had - doubled. For anybody with asthma or breathing difficulties it is likely to precipitate serious problems. Breathing strong ozone for any length of time would be like drinking bleach, best left to the Leader of the Free World.

best left to the Leader of the Free World

Just as a complete aside, why do they call it the ‘free’ world when it’s so damned expensive?

I thought that the seaside “smell” was Dimethyl Sulphide related to Dimethyl Sulphoxide (DMSO). Both have antiviral properties but probably not in non-harmful concentrations to kill a virus like the latest pandemic
pH

I thought that the seaside “smell” was Dimethyl Sulphide

Quite so, the idea of the seaside smell being ozone was debunked a century ago.

It is naturally occurring and of course it makes the protective ‘ozone layer’ in the stratosphere but that does not mean it is safe to breathe. It is a recognised and regulated air pollutant. The selling of treatment using ozone by alternative medicine is in part based on the naturalistic fallacy of natural=good, man-made=bad.

Chronic exposure to emissions from photocopiers in copy shops causes...

We assessed indoor air quality in photocopier centers and investigated whether occupational exposure to emissions from photocopiers is associated with decline in lung function or changes in haematological parameters, oxidative stress and inflammatory...