I do not buy canned food frequently; I primarily buy fresh or frozen. However I do buy them sometimes, usually assorted beans. So, I opened a can of Heinz beans on Sunday and found more than beans in the can. The inside walls were covered with what looked like mold, a black substance that you can scrape off with your nails. Unfortunately, I consumed half of them before I noticed (BLAH). I contacted Heinz and they did respond promptly with a phone call and a follow up email but I am not so sure that their explanation is valid . They said it was harmless staining, a reaction between food and the metal which was a Natural occurrence??? Really?

Personally, I think it is black mold and I find it strange they would so easily dismiss this as harmless. If nothing else it is pretty disgusting. They also said that the code identified the can as being manufactured in 2018 and was quite old. Ok, So, should the inside of a food can look like this after two years and does it really not affect people at all?

I must say when all is said and done that their response time was excellent and on the phone she was very courteous and emphatic so a plus for that. 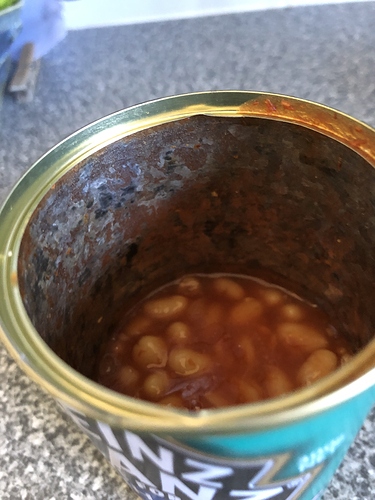 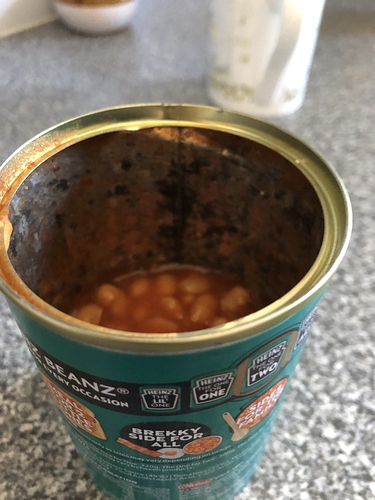 Personally, I think it is black mold and I find it strange they would so easily dismiss this as harmless.

Unless the can was damaged and allowed spores in before you opened it I doubt very much it was mold.

Hi @Marctoch, welcome to the community.

Personally, I think it is black mold

A can is sterile until opening, therefore it won’t be mould unless the can was bloated or damaged (meaning air has got in and contents are spoiled).

I agree with what you have been told. It is possibly a reaction between the food acids and the zinc galvanising under anaerobic conditions (no air present). The result is the black discolouring of the galvanised zinc surface. While it may not look all that great, it shouldn’t impact on the quality of the can’s contents.

According to the British Corrosion Journal the staining from sulphides of iron is harmless.

You are not the only one who was distressed about this staining. Something similar from MumsNet.

Personally, I think it is black mold and I find it strange they would so easily dismiss this as harmless.

I’ve often wondered as to the longer term integrity of the ring pull opening cans. It’s such a thin section of metal where the lid has been pre cut to aid opening.

That said, is it reasonable to expect other evidence of moulds, discolouration, odours from the beans in the top of the can if the can seal has failed. None observed it suggests what has been said prior.

Note:
Not all product is OK with tin, which is why cans for tinned fish and some other products usually have a secondary internal coating. Tin is used in cans as it is corrosion resistant and considered non toxic. It is still vulnerable to attack from strong acids, alkalis, and acid salts. Perhaps the can of your beans has a little extra of something? More likely there has been a passivation failure during manufacture of the tin plate used. IE quality failure in can manufacture.

While it may not look all that great, it shouldn’t impact on the quality of the can’s contents.

The key here is knowing whether any damage to the container has actually occurred, in what form and to what extent. In the extreme case where there is either clear evidence of leakage or external penetration/contamination as a result of such damage the diagnosis can be easier. In cases as @mark_m suggested where an internal process/reaction has taken place it might not be so clear. The industries I’ve worked in that involved packaging weren’t food related but the strange stories of packaging issues were amusing at best, a little scary in a couple I remember.

As a consumer I can relate one story of problematic can containing a beverage. At point of sale (a big red machine with a coin slot/etc) the container appeared as any other, but on opening it was found to contain ‘white-ish lumps of something’ - which of course were not discovered until the first mouthful. I contacted the manufacturer who was more than happy to both admit to and describe the problem they had in the canning process (and assure me it had been rectified) - on visiting the plant which was conveniently only a few blocks away from my place of work, the person I met had an example of the canning problem which showed a barely visible crack which had apparently been present in a substantial number of cans across a whole production run due to a fault in the can manufacturing process. I was told that ‘what was in the can was not harmful as nothing bad can live in productnamehere’ - I’m not completely convinced, but he did give me a slab of cans to make up for it and I experienced no ill effects other than being a tad paranoid drinking from cans for a while.

It would be interesting to sample a range of cans from the same bean vendor to see whether this is ‘normal’. The explanation from Heinz sounds vaguely plausible to me - I’m not sure which is preferable, some staining and potentially a boost in mineral intake from the can itself, or consuming product from a container with a ‘safe’ lining made from who-knows-what …

Thanks all for your input, I feel a little more comfortable now