Driver assist features like AEB have been demonstrated to be a beneficial positive for road safety. But when the systems go from giving a warning to alert drivers of a situation, to actively taking control of the vehicle, then those systems had better be good. Very, very good.
Whilst car makers undoubtably put a lot of time and testing into their systems, there will always be an element of keeping up with what other makers are offering, and an element of marketing.
Some car makers will produce very good active systems, others not so good.

Turn the damn thing off.

This advice isn’t recommended as it could potentially affect an ability to make a claim in the event of an accident. The first policy PDS I pulled was Budget Direct car insurance. It’s PDS states for a general exclusion:

It is possible that turning off a safety feature would be considered ‘unsafe’ which may result in a claim not being paid, especially if there is any chance the accident could have been prevented with the safety feature activated.

That is a pretty long bow to draw. Not using a driver assist function would invalidate an insurance claim.
If you want to go down that path of thinking, then if I was driving along using due care and attention behind another car and it suddenly emergency braked for no apparent reason causing me to rear end it, I would argue the fault was not mine in any insurance issue.

another car and it suddenly emergency braked for no apparent reason causing me to rear end it, I would argue the fault was not mine

This example would be it still is. It is classed as following too closely. Road rules require adequate distance to the vehicle in front in the case of heavy or emergency braking.

As I said, driving with due care and attention. That also includes following all applicable road rules and distancing.
Probably a very good reason to have a dash cam to support your version of events.

That is a pretty long bow to draw.

Since most of us turn off lane departure ‘assistance’ as an example, it would appear that few claims where the vehicle was not squarely in lane might ever be paid if that were the case. Claims seem to be paid based on at fault determinations, not whether a particular feature was disabled or enabled.

As insurance ramifications are well OT regarding the reliability or lack thereof of MG or other AEB systems this should be another topic of its own if ‘we’ wish to pursue it; it is an interesting thought and perhaps more so if Tesla ‘autopilot’ crashes are included in that discussion.

Even more so if autonomous systems like crewless trains going wild, and a certain problem that Boeing had with their 737max.
But that is way off this topic now, but a general concern as technology advances.

I think that it is not to far away when an insurer tells the assessor , who is examining a vehicle after an accident claim , to plug into the CAN bus plug on the vehicle and like a black box it will tell whether the AEB , and related kit , was activated at the time of the accident . The claim will/could be decided on that outcome .

I have spoken to people in the motor trade and the control of safety kit by the operator of the vehicle is certainly being debated .

It is also likely that safety features such as AED become part of the Australian Design Rule for Vehicles, like has been done for ABS, airbags and such like which is mandated for new vehicles after a particular date.

In such case, a vehicle certification for sale in Australia is based on the installation on operation of the safety feature. Turning off such features could make the vehicle unroadworthy, like that for not having a functioning an airbag or ABS system.

One had to think about the consequences of turning off a safety device and whether it should be recommended.

I am uncomfortable with someone providing recommendations to turn off a safety device, when such devices when they are needed save lives or could reduce serious injuries. If someone suggested permanently removing batteries from smoke detectors because they beep when batteries are low which is annoying, would one recommend that this be an appropriate course of action?

not having a functioning an airbag

Do you mean not having any airbag or having a Takata airbag?

To answer the topic, in relation to whether safety systems are safe, I remember when airbags first came out there was discussion that they were dangerous as they have exploding forces when they deploy. There was arguments that the deployment may cause more injury than not having airbags. There was also discussion of why are they needed if one wear a seat belt (in relation to this, there was also talk of US fitted airbags set to deploy at lower speeds due to some states not mandating seatbelt wearing - @PhilT, might know if this is still the case).

If one looks in Australia there are reports from 2009 that ‘Airbags and other improvements to car safety have saved at least 2700 lives and the Australian economy nearly $20 billion since the early 1990s.’. I expect that this figure now would be more than double this and it shows the benefits of safety systems.

While some safety feature are a ‘pain’ and ‘annoying’, they do serve a purpose by protecting lives and reducing severity of injury than would otherwise have been the case.

I am sure that there are examples of safety devices causing injury through their use or poor quality (Takata airbags is one), but, I would be very surprised if any road safety expert suggest that a removal or turning off of a safety feature poses more risks than leaving it on. Even potentially defective Takata airbags possibly are safer to have in an accident, than one not at all as not all Takata airbags are defective (it is just hard knowing which ones are or aren’t defective).

(in relation to this, there was also talk of US fitted airbags set to deploy at lower speeds due to some states not mandating seatbelt wearing - @PhilT, might know if this is still the case).

As with many things some US states are more about freedom and the willingness to let people do silly things than others. Re seatbelts, scroll down to the LAWS section for an eye opener.

Information from IIHS-HLDI on seat belts

For air bag differences, while a 1999 paper I believe it is still accurate.

Driver Injury Patterns in the United States and Australia: Does Beltwearing...

Airbags in the United States and Australia are fundamentally different. In the U.S., airbags are designed as primary restraints to protect unbelted occupants while those in Australia are design as supplementary to the seatbelt. The deployment...

and motorcycle helmets in the US, although not an inbuilt safety feature.

Which States Have Motorcycle Helmet Laws? How Do They Impact Your Insurance?

In most states, it is legal to ride a motorcycle without a helmet, as long as you're at least 21 years old. Only 19 states in the U.S. have universal motorcycle helmet laws that require all riders to wear helmets, no matter their age.

Front airbags deploying in low speed events proved to very unsafe for children who happened to be in the front passenger seat.
The bag deployed straight at the head, rather than the chest of an adult.

I understand as a result national road rules were changed. Children (under 4 years) aren’t allowed to sit in the front passenger seat however, children 4-7 years are if there is no other option (such as a single row seating ute or van or all back seats are taken by other children).

Voilvo and Renault for two, and probably all cars, have switches to deactivate the front pax airbag if a child seat has to be fitted there. Many owners manuals are generic and these are obviously LHD market diagrams, so whether they apply in Australia? Nope. 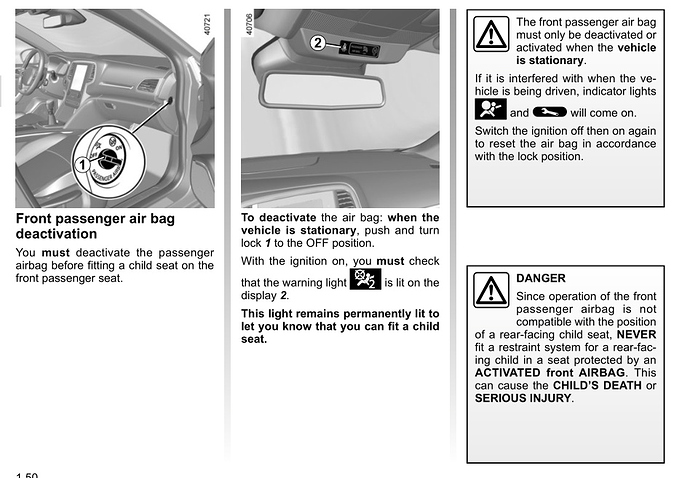 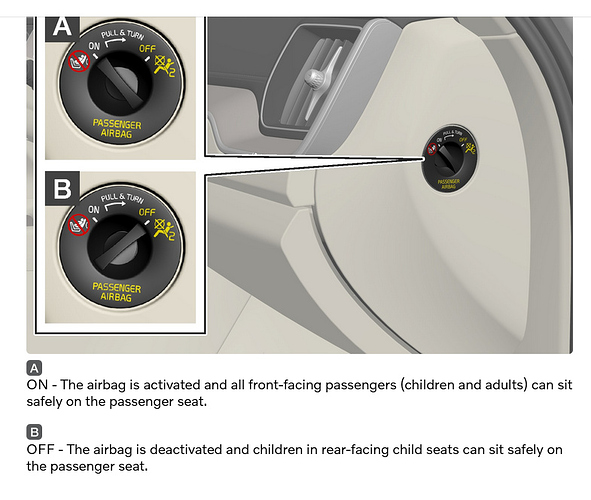 I trust the real point is things can be turned off for safety when it needs to be and that does not go against ADRs being modified over time, or features added to vehicles for supposed as well as real safety (ANCAP issues).

As Australia apparently demands, the switches in the Renaults are replaced by a no child seat in the front decal, and I suspect the same with others.

Hopefully we can assume this is one of those standardised across all states traffic laws. 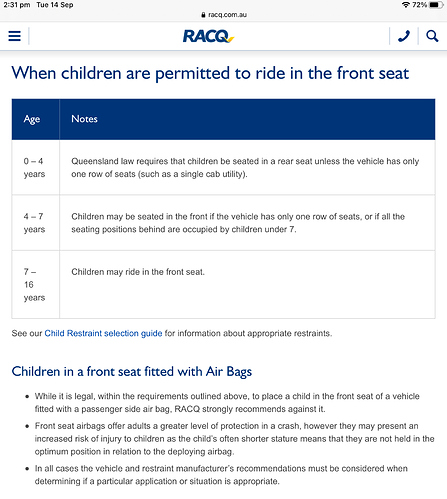 Our Toyota SUV manual also includes similar recommendations that children should not be seated in the front seats when there is an airbag/bags fitted.

P.S.
Not aware of any device able to to deactivate the passenger side airbags.

that does not go against ADRs being modified over time

The ADR 73/00 doesn’t allow for the turning off of the airbag which is why it isn’t fitted to Australian models. This also a consistent approach with the United Nations 'ECE R 94/01 - “UNIFORM PROVISIONS CONCERNING THE APPROVAL OF VEHICLES WITH REGARD TO THE PROTECTION OF THE OCCUPANTS IN THE EVENT OF A FRONTAL COLLISION”. Any country which has adopted these UN provisions would also have the switch removed.

Having a switch requires a driver/owner to turn on and off depending on the occupant of the front seat. Human behaviour would likely result in the switch being left off to save trying to remember to turn it off, and back on again.

Human behaviour would likely result in the switch being left off to save trying to remember to turn it off, and back on again.

Those cars that have (had?) switches also had quite visible alerts and lights on the panel showing the pax airbag was disconnected. ‘Nothing is fool proof because fools are so ingenious’. The obvious rationale for having a switch was ‘too many’ children for the rear seating and an empty seat up front.

Now we can all have two cars and two drivers, or a bigger 4WD or people mover in a single parent family with many safe youngsters.

‘Nothing is fool proof because fools are so ingenious’

and they will take the easiest/convenient option for them.

Now we can all have two cars and two drivers, or a bigger 4WD or people mover in a single parent family with many safe youngsters.

While not ideal, might be peace of mind as the alternatives may be worse (a young child being struck with an inflating airbag or an older passenger not protected by an airbag in a serious accident).